If you want to understand just how effectively the American media have turned Republicans into second-class citizens, watch the superb Chappaquiddick, the true story surrounding U.S. Sen. Ted Kennedy (D-MA) on the fateful night he left an innocent young woman to die in order to save his political career.

Despite his illegal and morally appalling behavior, despite his depraved indifference towards Mary Jo Kopechne (a 28-year-old woman with her whole life in front of her), Kennedy was not only allowed to remain a U.S. Senator for another 40 years, until the end of his life, he did so as an “esteemed” senator, as a “giant” venerated and cherished by our depraved media culture.

What I mean by “second-class citizen” is this: had any Republican politician been guilty of the least of Kennedy’s sins that night, had any conservative-leaning public figure been caught drunk driving, nabbed with “another woman,” or busted leaving the scene of an accident on the night of July 18, 1969, that would have been the end of them. Only infamy and disgrace would have followed, not 40 years of media worship and whitewash, and certainly not the opportunity to sit in judgment of a great man like Supreme Court Justice Clarence Thomas. 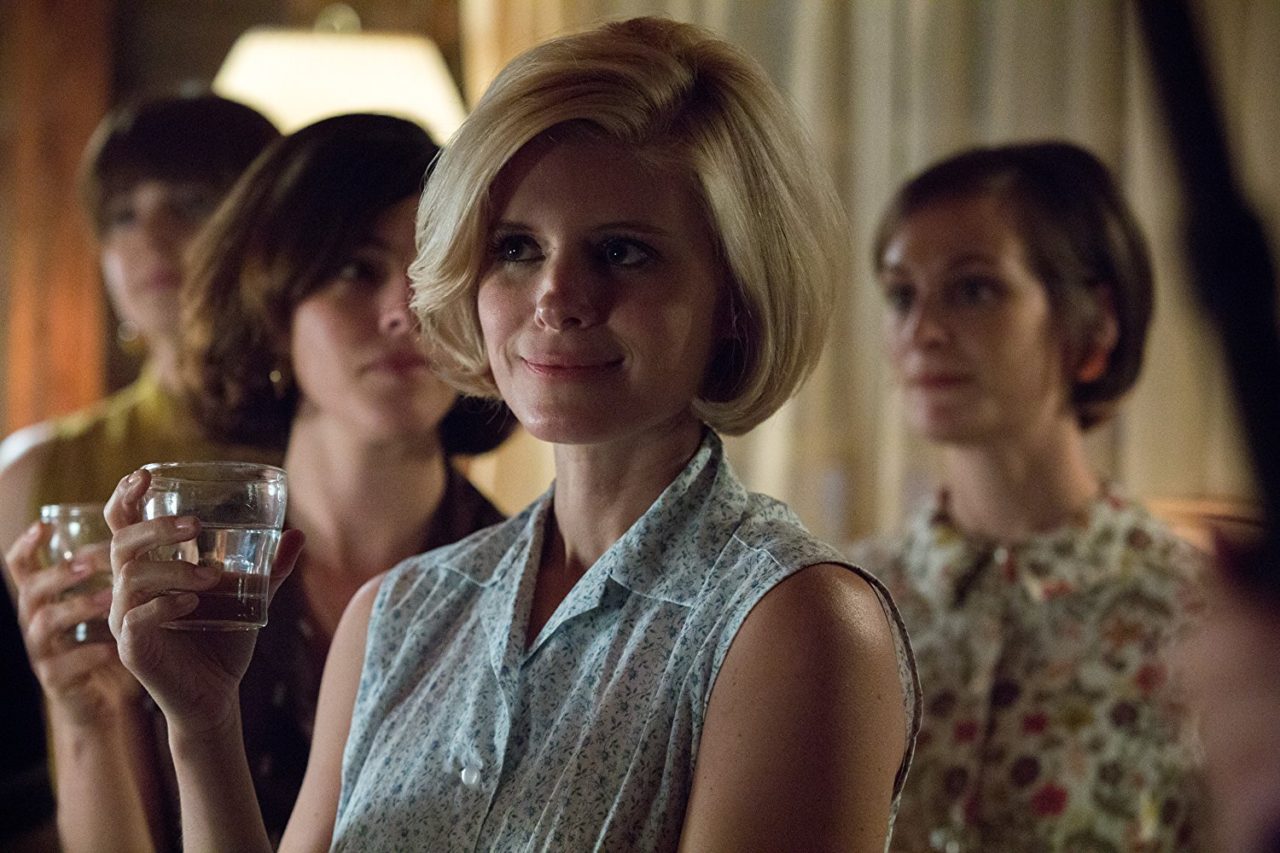 That was my prime takeaway from Chappaquiddick; the fact that the far-left has such a tight grip on our culture, George W. Bush practically lost a presidential election over a (then) 25-year-old drunk driving incident, and Edward Moore “Ted” Kennedy remained a viable presidential candidate despite behavior so grotesque, your jaw will drop.

Chappaquiddick works as well as it does for a number of reasons. First off, Chappaquiddick tells the truth, the unvarnished truth; and because fact is always more compelling than fiction, at times you will not believe what you are witnessing. Secondly, Kennedy is not portrayed as evil. At times, you cannot help but sympathize with him. This is a fully-fleshed human being, not a caricature, not a mustache-twirler, and this only makes his behavior all the more monstrous.

I call this the “Downfall Effect.”

For decades, Adolf Hitler had been portrayed only as a raving lunatic, a one-dimensional sociopath. Then, in 2004, Oliver Hirschbiegel’s Oscar-winner Downfall came along, and we were finally given a glimpse of the grandfatherly man who conquered the heart of a nation and enjoyed cult-like loyalty. On display were Hitler’s charms, his charisma, his ability to be kind and gracious.  Seeing Hitler as a person, as a man capable of decency, only makes his crimes even more obscene because they were committed by a man. not a rabid dog. 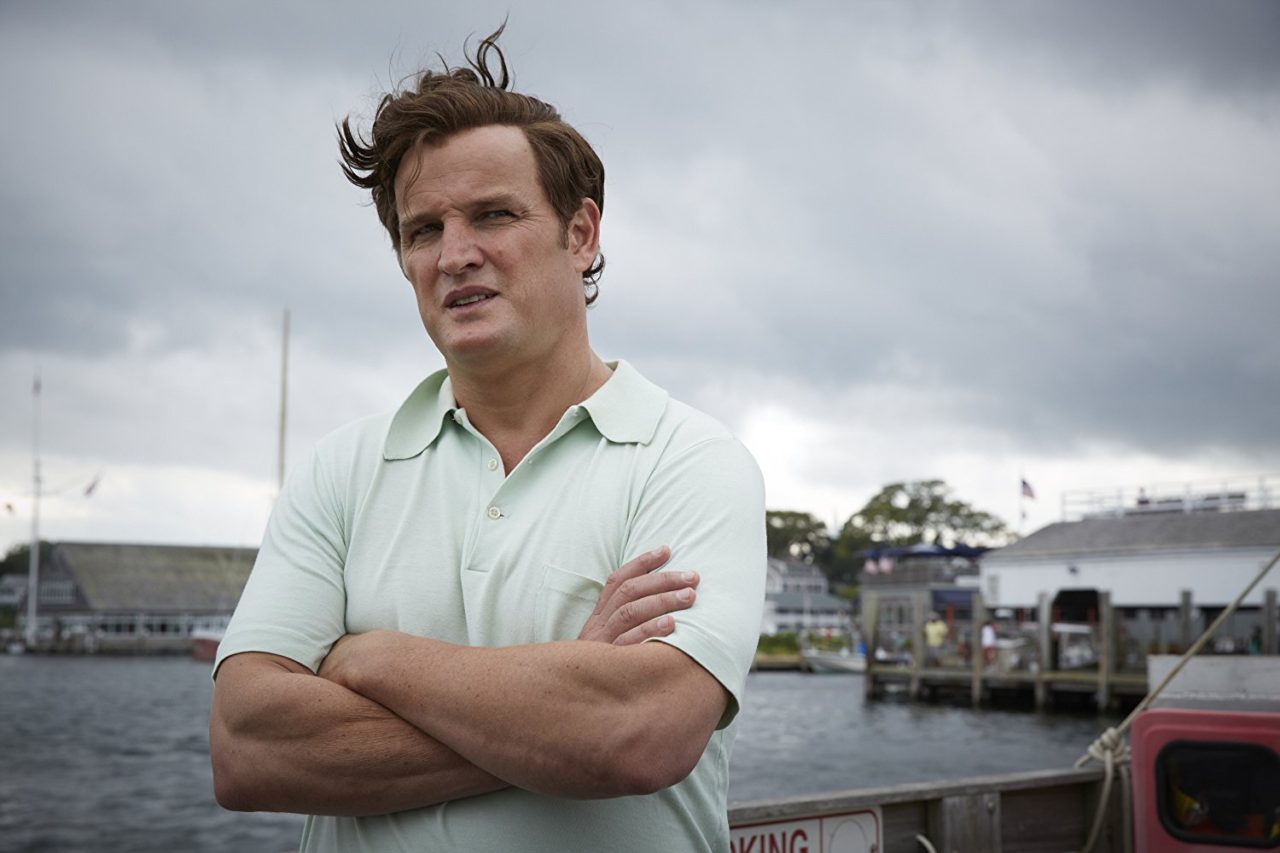 Written by Taylor Allen and Andrew Logan, and ably directed by John Curran, Chappaquiddick opens by reminding us of the burden on the 39-year-old Kennedy’s shoulders: those three dead brothers who refuse to go away. Joe Jr. died a strapping WWII hero. John died a handsome, charming martyred president. Bobby died a martyr to youth and idealism. And so, all that remains is Teddy, the chubby and awkward little brother born without the charm, charisma, good looks, or brains.

Teddy is the Peter Lawford of the Rat Pack, the Chris Cuomo, the Fredo Corleone. Naked nepotism has dropped a marginal man into a circumstance he is in no way prepared for. Had his brothers lived, Teddy would have been much happier, he would have been the Kennedy no one cared about, which would have left him free to live off his inheritance, to drink, and to commit adultery.

Instead, his future is rushing up to meet him in the form of a Mack Truck called the 1972 presidential election. His family and half the country desperately need Teddy to do what he cannot: bring back John’s Camelot and Bobby’s Utopia. But all Teddy wants is to drink and commit adultery.

To make matters worse, as 1972 crushes him like a bug, this is the weekend a man will land on the moon, fulfilling brother John’s promise that America could do the impossible before the decade was over. As Teddy parties with the Boiler Room Girls (Bobby’s devoted and beautiful campaign staff) at a remote cabin on Chappaquiddick Island, Apollo 11 and Neil Armstrong are on their way to the moon.

And then the unthinkable happens.

To its great credit, Chappaquiddick does not try to fill in the holes of what we do not know. While there is no question Teddy (a superb Jason Clarke) was drinking and driving recklessly, since we will never know if he had a sexual affair with Kopechne, the movie only uses the facts to suggest the possibility. That the two were close, and at the very least intimate friends, is not in doubt. 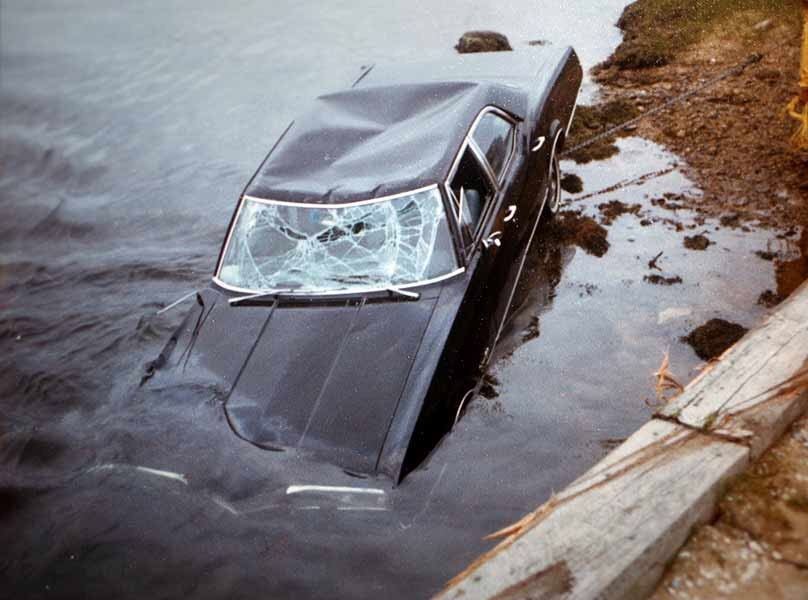 Another question the movie does not answer is how in the hell Ted Kennedy got out of that car.

Speeding and intoxicated, Kennedy flies the car off a bridge where it overturns in about five feet of water. Somehow Kennedy got out, even though Kopechne was found dead with all the windows and doors closed.

What happens next beggars belief.

In no hurry, and filled with only self-pity, Kennedy walks back to the cabin to enlist the aid of Joe Gargan (Ed Helms) and Paul Markham (Jim Gaffigan), two longtime Kennedy loyalists and fixers. 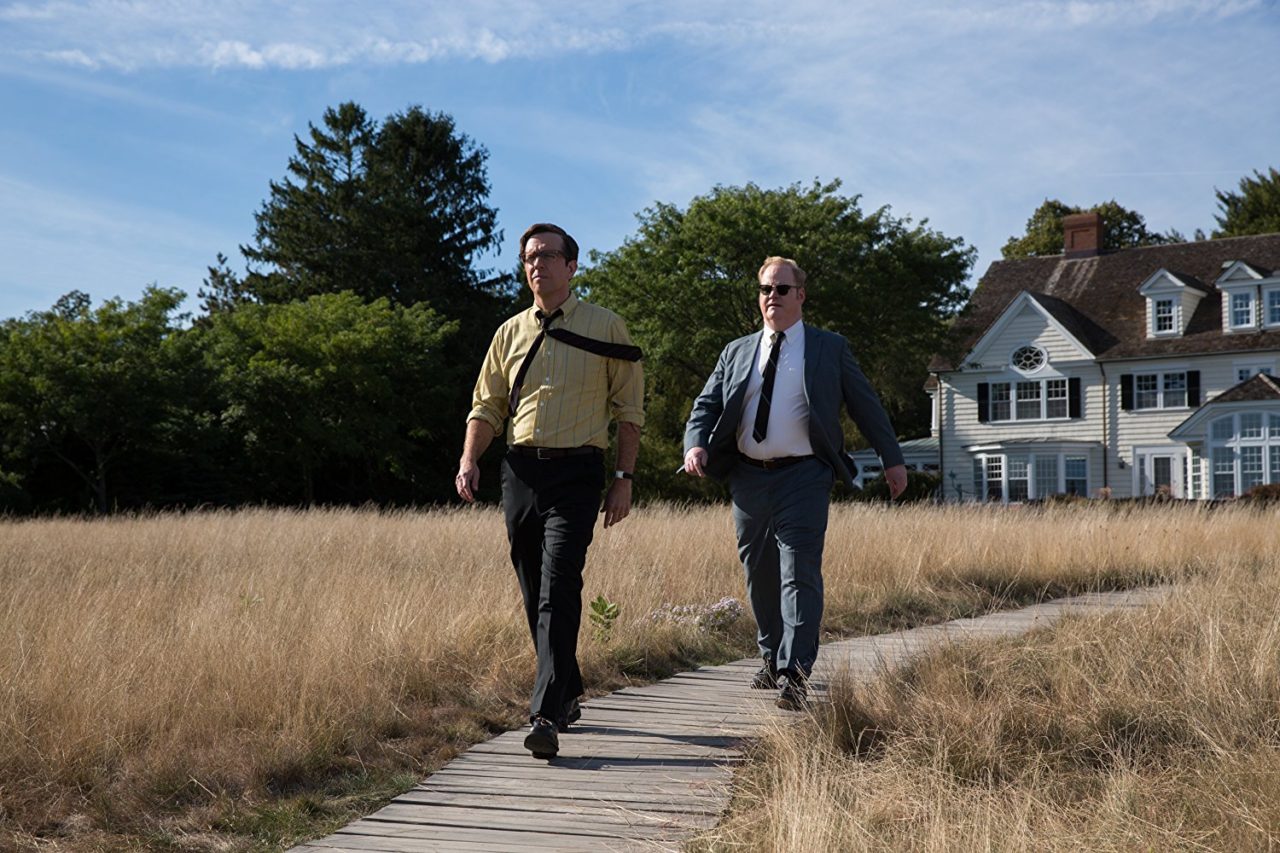 Gargan and Markham make a real effort to save Kopechne and then, assuming she is already dead, put Kennedy in a rowboat so he can turn himself in.

Instead, Kennedy returns to his hotel room, takes a hot bath,  goes to bed, gets up the next morning, and is enjoying brunch with friends when Gargan, horrified to learn Kennedy has not gone to the police, finally convinces Kennedy to do so.

Kennedy needed time to sober up and to think, think of a way out of this. But again, he’s not Joe Sr., Joe Jr., John, or Bobby — he’s Teddy, and his public relations mishaps begin to pile up.

Meanwhile, John’s legacy is fulfilled as Armstrong steps foot on the moon, which works to Teddy’s benefit in keeping the media occupied.

Upon his arrival at his family home, Teddy is again reminded of his inadequacies. His disabled father (Bruce Dern) and the mercenaries who protect the Kennedy brand at all costs (Ted Sorensen, Robert McNamara, etc.) had a plan to salvage the situation, but one that Teddy’s fumbling has already defeated. 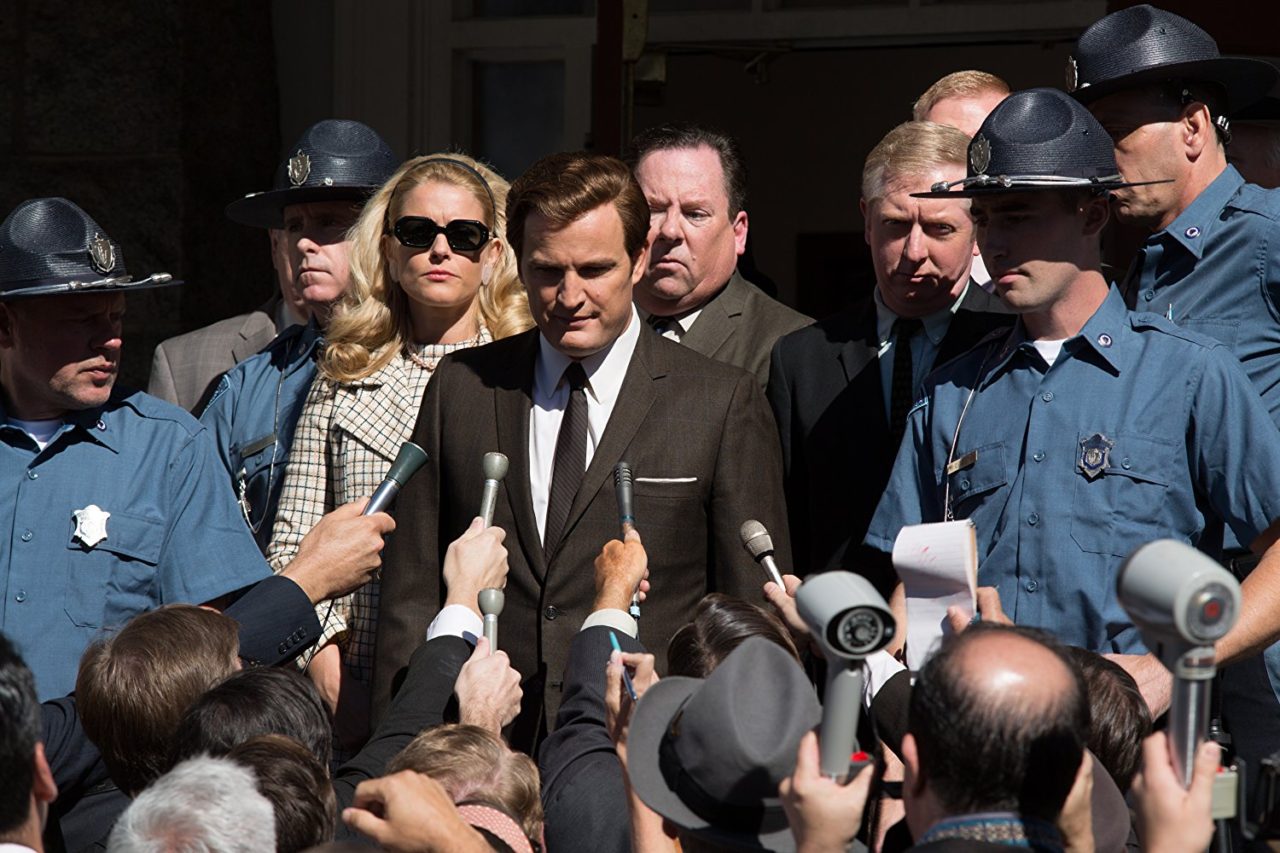 Oh, sure, the movie portrays the media as rabid, but we all know that once Teddy made his nationally televised speech, this gave the media the out they were desperate for. And that is all the media want when one of their own is in trouble — an excuse to move on.

How do we know this?

Well, here is a stunning fact that should be common knowledge, but thanks to a national media desperate to protect a fellow Democrat, is not: Mary Jo Kopechne did not drown. There was a pocket of air in the car. She died slowly and painfully as the air ran out.

But she really died because we live in an unjust media world where a Democrat knows he can take a leisurely bath instead of running for help.