Guardians of the Galaxy director James Gunn attended a pedophilia-themed party, according to photographs surfacing online.

The Daily Caller’s Ian Miles Cheong appears to have been the first to find and publish the photos, seen below.

The now-disgraced Gunn was fired by the Walt Disney Co. last month after countless “jokes” about child rape were dug up on his Twitter account. The jokes were more than five-years-old and also mocked sensitive subjects such as AIDS, the Holocaust, Mexicans, and “ass raping” women.

Huston Huddleston posted this video on my Facebook page with the note ‘I thought you’d appreciate this,’ My response: ‘Appreciate it?!! I just came all over my own face!!’

A few years later, this same Huston Huddleston, after being charged with soliciting a minor to appear in child pornography, pleaded guilty to possession of child pornography. He is now a registered sex offender.

None of Gunn’s defenders, though, has ever addressed Gunn’s connection to Huddleston, and the left-wing entertainment media have all coordinated in an effort to pretend the connection does not exist.

As a result, late last week, trial balloons were being floated to test the public reaction if Disney reversed itself. “Rumors” about the possibility of Gunn’s re-hiring were strategically leaked to the left-wing entertainment media.

According to the screenshots of the pedophilia-themed party, which appear to come from Gunn’s personal blog, the theme of the party was “To Catch a Predator,” which is the title of a popular NBC investigative series that ran from 2004-2008. Using hidden cameras, the show would catch alleged sexual predators who had arranged to have sex with children as young as 12.

One of the photos (Gateway Pundit has more) shows Gunn dressed as a Catholic priest posing with two young women dressed to look like children. One is in pigtails and pouting, another looks like she is about to cry as she holds a juice box and a doll. Father Gunn, who appears to be wearing eye makeup, looms over them. 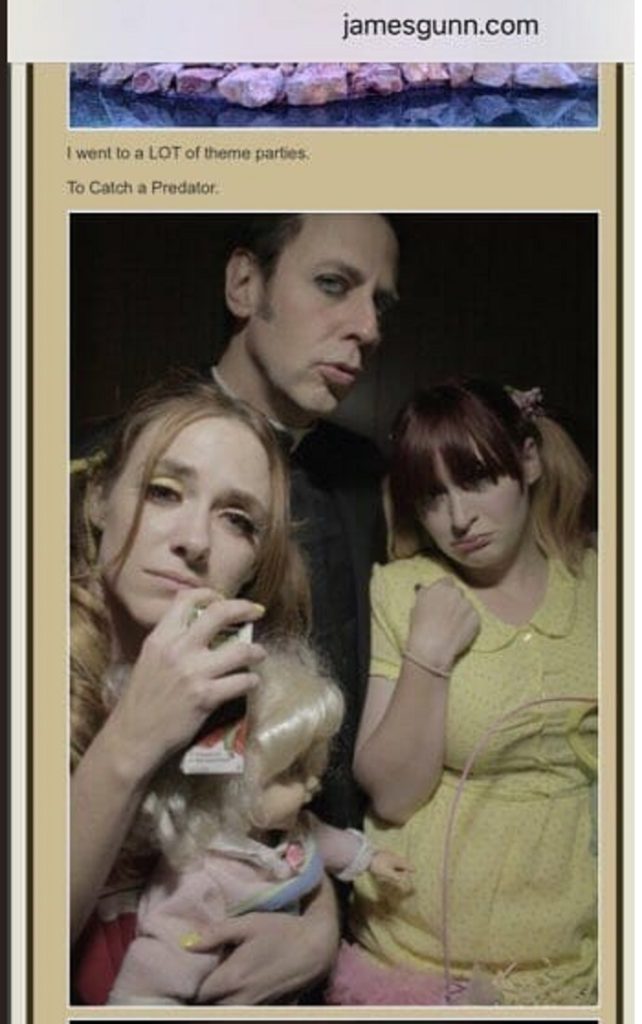 The second photo features Gunn, again dressed as a priest, next to a pigtailed young women sucking her thumb. Kneeling on the floor in front of Gunn is a man made up to look like a clown. He has his hands around the throat of the second young woman wearing what looks like a babydoll dress. The photo also features a large rabbit and a man (in pigtails?) yanking at his pants. 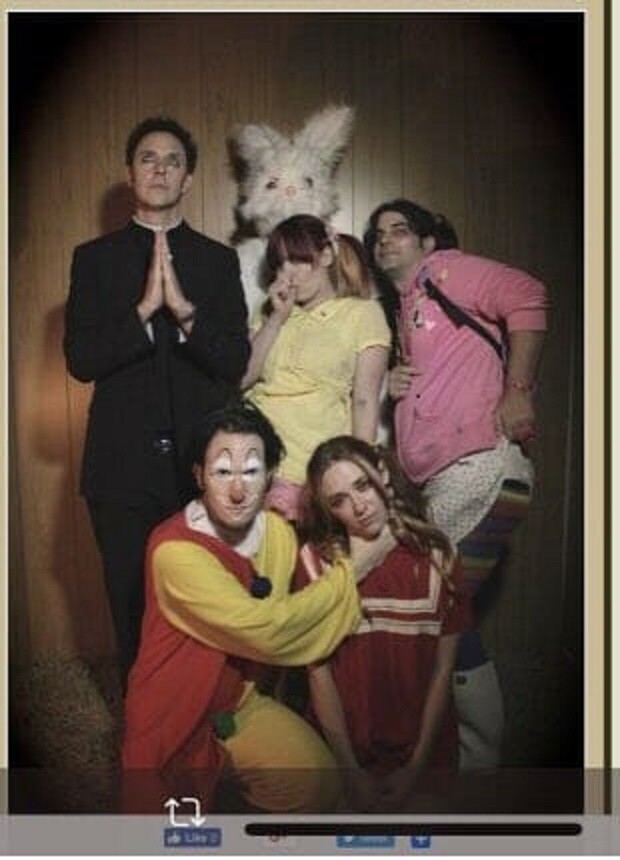