In response to the news that President Donald Trump is considering Chris Christie for attorney general, Ron Perlman said, “Meanwhile, lindsey graham was heard muttering, ‘how many dicks do I gotta suck around here!'” 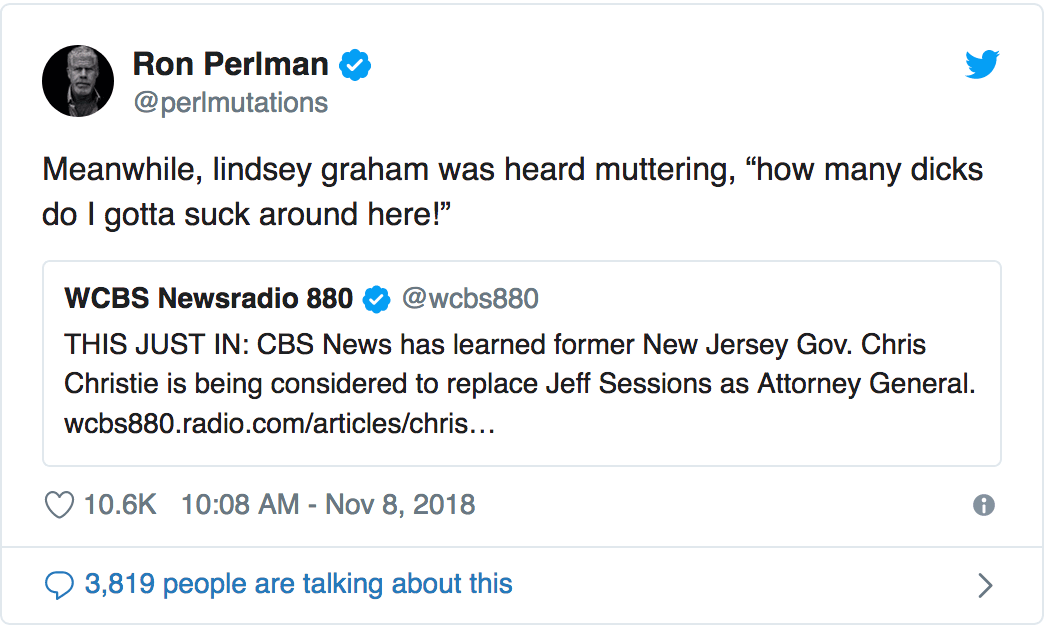 Lindsey Graham, an unmarried man, is often the target of homophobic attacks, with liberal critics using speculation over his sexuality as a weapon to degrade him.

After Graham’s defense of Brett Kavanaugh amid allegations of sexual misconduct in September, left-wing celebrities once again fell back on homophobia to attack him.

“Oh lookee lookee here. Miss Lindsey Graham doesn’t have the balls to speak up today does she? #KavanaughHearings” Griffin said in a social media post.

Oh lookee lookee here. Miss Lindsey Graham doesn’t have the balls to speak up today does she? #KavanaughHearings

Bill Maher, not to be outdone, said that Graham was missing the “stabilizing influence of his dead boyfriend,” a reference to the late John McCain.

Ron Perlman is no stranger to ugly rhetoric like this. The Sons of Anarchy star has previously referred to Trump a “racist cunt.”

As for the policy of the Trump administration, that’s nothing more than “hate-infused white supremacy dressed up as policy,” according to the 68-year-old.

Kinda of the same way reality tv passes for culture when all it really is is voyeurism, our current regime, as close as we’ve ever come to banana republicanism, is nothing more than hate-infused white supremacy dressed up as policy.

Ron Perlman appears to have deleted his vulgar tweet about Sen. Lindsey Graham performing oral sex on men as a means of being selected the next attorney general. A screenshot of Perlman’s now-deleted tweet has been added to this article.