Actress and singer Bette Midler appeared to agree with her arch-nemesis Donald Trump Friday — for a few hours, at least.

Midler blamed the coronavirus pandemic on China’s Communist regime from her verified Twitter account, then later deleted the post without explanation. She citied “Chinese negligence” for the spread of the virus and demanded that Beijing pay “reparations” for the devastation it has caused countries around the world.

“Is it too early to ask China to pay #reparations to the many nations around the world who lost millions of people, and whose economies crashed, due to China’s negligence?” she wrote, using the hashtags #Labs and #WetMarket.

“The rest of us are struggling mightily, while China steps over the rubble…” she said. 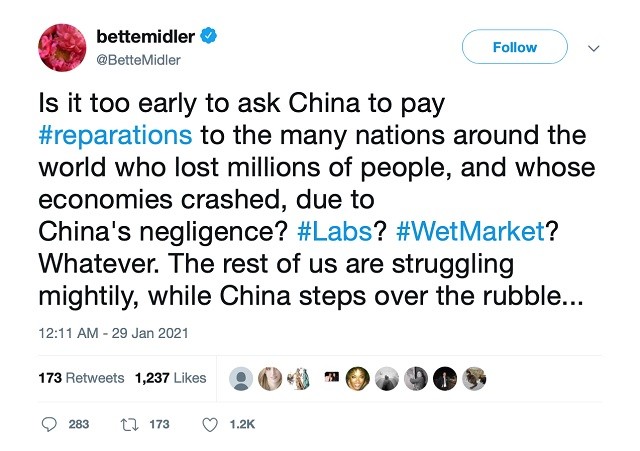 Bette Midler’s words echo those of former president Donald Trump, who has repeatedly held China responsible for the pandemic. During the first presidential debate in October, the president said, “It’s China’s fault. It should never have happened.”

During his address to the United Nations last year, President Trump called it the “China virus,” while blaming Beijing and the World Health Organization for failing to take the necessary steps to halt the virus’ spread.

Midler has been one of Hollywood’s most vocal anti-Trump activists, using her social media platform to regularly blast the president, who she has called a “racist criminal.” At one point, she even blamed the president for the country’s coronavirus deaths, calling him a “murderer.”

Celebrities and other entertainment elites are under pressure to avoid saying negative things about China as major Hollywood studios are increasingly depending on access to the Chinese market to turn a profit on blockbuster movies and to grow their bottom lines.

Midler did not immediately respond to a request for comment from Breitbart News.