CLAIM: Left-wing Hollywood star Cher claimed in a tweet Friday that Republicans only allow white people to vote, adding that the GOP doesn’t understand why “black, brown, and native Americans” are allowed to vote in elections.

VERDICT: FALSE. The modern Republican party has never put forth legislation that limits voting rights to only white people.

It remains unclear how Cher arrived at her conclusion, but it appears she was referring to GOP-led voter integrity laws in states including Georgia, Arizona, and Idaho. On Friday, Florida’s legislature passed a comprehensive election integrity bill that Gov. Ron DeSantis (R) has stated he will sign into law.

The new laws are intended to combat voter fraud by implementing more comprehensive voter identification requirements as well as other measures. But Democrat leaders and celebrities have argued repeatedly that the laws are racist and a form of “voter suppression,” claiming without evidence that black people don’t know how to obtain government-issued identification. 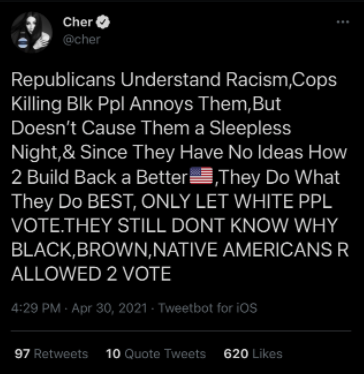 Republicans Understand Racism,Cops Killing Blk Ppl Annoys Them,But Doesn’t Cause Them a Sleepless Night,& Since They Have No Ideas How 2 Build Back a Better🇺🇸,They Do What They Do BEST, ONLY LET WHITE PPL VOTE.THEY STILL DONT KNOW WHY BLACK,BROWN,NATIVE AMERICANS R ALLOWED 2 VOTE

Cher didn’t mention in her now-deleted tweet that Democrats have a history of opposing civil rights for black people.

Prominent Democrats in Congress opposed the Civil Rights Act of 1964 that ultimately outlawed discrimination based on race, color, religion, sex, and other traits. The late Sen. Robert Byrd (D-WV), who was a member of the Ku Klux Klan, filibustered the bill in the hope of defeating it. He was unsuccessful thanks in large part to Republican Minority Leader Everett Dirksen (R-IL), who rallied Senate Republicans for a cloture vote to stop the Democrat-led filibuster.

During the Civil War, many prominent Confederates and slave owners were Democrats, including Jefferson Davis, while President Abraham Lincoln, a Republican, led to the abolition of slavery.

Earlier this month, Cher claimed without evidence that new voter laws will help Republicans realize their  “dream of white supremacy” for the country.