The 44-year-old West, who has legally changed his name to Ye, made the revelation when he shared a five-minute long Instagram clip that opened with him saying how thankful he was for his friends, family, fans and even the haters.

He then broached politics and wearing the “Make America Great Again” hat; something his wife Kardashian was less than enthused by.

“Good lord my wife did not like me wearing the red hat,” West shared. “Being a good wife, she just wanted to protect me and our family. I made me and our family a target by not aligning with Hollywood’s political stance and that was hard for our marriage.

“Then I ran for president without proper preparation and no allies on either side. I embarrassed my wife in the way that I presented information about our family during the one and thank God only press conference.”

He said in an address at the charity event held to help those living near Skid Row: “The narrative God wants is to see that we can be redeemed in all these relationships.

As Breitbart News reported, West based his 2020 run for high office by proclaiming America “will build a stronger country by building stronger families” after previously showing his support for President Donald Trump by wearing his MAGA hat. 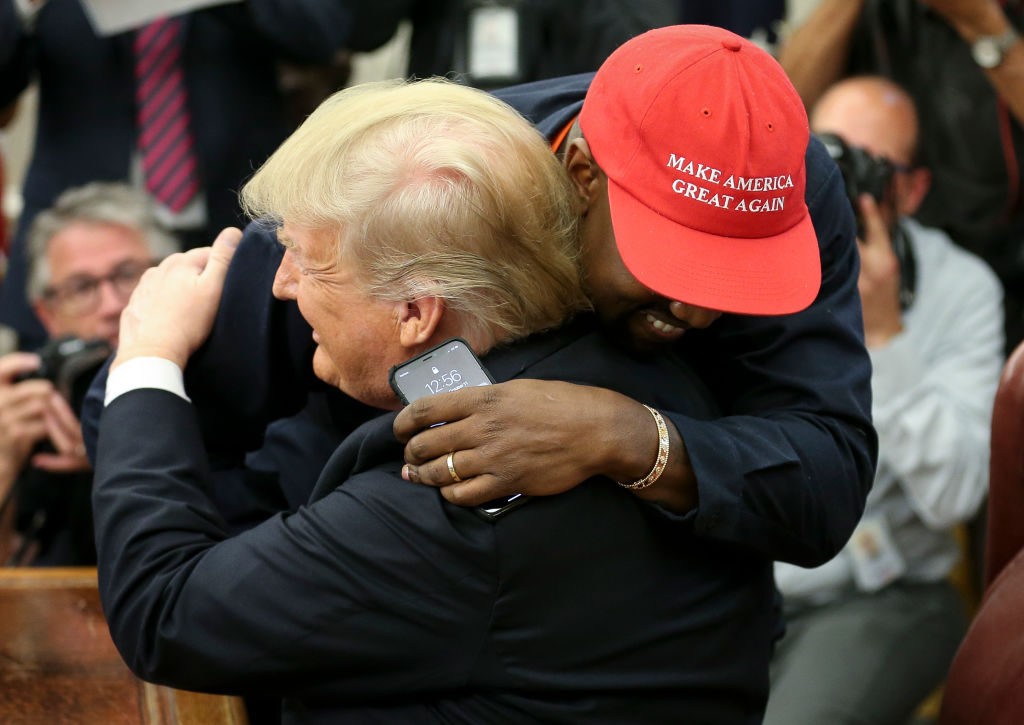 U.S. President Donald Trump hugs rapper Kanye West during a meeting in the Oval office of the White House on October 11, 2018 in Washington, DC. (Photo by Oliver Contreras – Pool/Getty Images)

The Jesus Is King crooner declared that in order to build a stronger nation, Americans must build stronger families, adding that “families are the building blocks of society.”

West also noted he is “concerned for the world that feels you shouldn’t cry” about abortion.

“I cried at the thought of aborting my first born and everyone was so concerned about me… I’m concerned for the world that feels you shouldn’t cry about this subject,” he said.

West further proclaimed Planned Parenthood uses abortion as part of a “black genocide” project, and such abortion mills have been “placed inside cities by white supremacists to do the Devil’s work.”