ROME — Pope Francis has joined the Archbishop of Canterbury and the Ecumenical Patriarch Bartholomew in proclaiming climate change “an immediate and urgent matter of survival” for humanity.

In Tuesday’s joint statement, the leaders urge fellow Christians to repent of their ecological sins, insisting that biodiversity loss, environmental degradation, and climate change “are the inevitable consequences of our actions, since we have greedily consumed more of the earth’s resources than the planet can endure.”

“The extreme weather and natural disasters of recent months reveal afresh to us with great force and at great human cost that climate change is not only a future challenge, but an immediate and urgent matter of survival,” the prelates state. 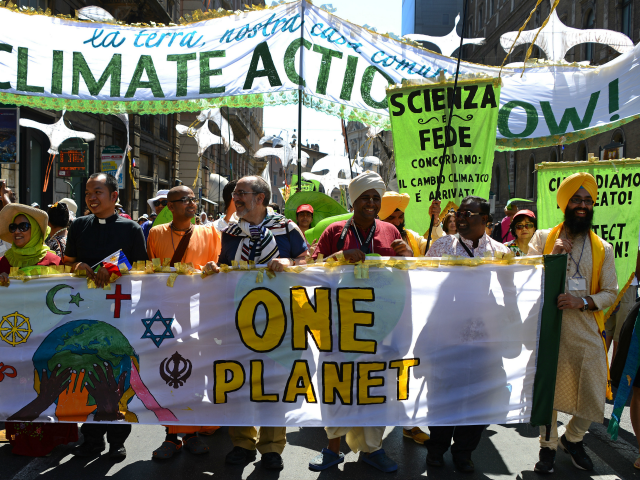 Activists display banners calling for action against world poverty, climate change and other environmental issues as they arrive on St. Peter’s square prior to Pope Francis’s Sunday Angelus prayer on June 28, 2015 at the Vatican.  (GABRIEL BOUYS/AFP/Getty Images)

These disasters have befallen the planet because we “have maximised our own interest at the expense of future generations,” the bishops assert. “By concentrating on our wealth, we find that long-term assets, including the bounty of nature, are depleted for short-term advantage.”

Yet despite these dire omens of today, tomorrow “could be worse,” they warn. “Today’s children and teenagers will face catastrophic consequences unless we take responsibility now.”

For the sake of young people who understand that their futures are under threat, “we must choose to eat, travel, spend, invest and live differently, thinking not only of immediate interest and gains but also of future benefits,” the bishops declare.

“We repent of our generation’s sins. We stand alongside our younger sisters and brothers throughout the world in committed prayer and dedicated action for a future which corresponds ever more to the promises of God,” they add.

The prelates’ joint statement was released in the month of September, “celebrated by many Christians as the Season of Creation, an opportunity to pray and care for God’s creation.”

They also launched the appeal as world leaders “prepare to meet in November at Glasgow to deliberate on the future of our planet, we pray for them and consider what the choices we must all make.”

“All of us — whoever and wherever we are — can play a part in changing our collective response to the unprecedented threat of climate change and environmental degradation,” they conclude.