ROME, Italy — Pope Francis hosted scientists and religious leaders in the Vatican Monday, where they signed a joint appeal calling for carbon neutrality and a radical change in lifestyles.

“Scientists have warned us that there might be only one decade left to restore the planet,” the appeal declares,” urging the achievement of “net zero carbon emissions as soon as possible, with wealthier countries taking the lead in reducing their own emissions and in financing emission reductions from poorer nations.”

The appeal, signed by a number of scientists and leaders from different faith traditions, is addressed in particular to participants in the upcoming COP26 U.N. Climate Change Conference taking place in Glasgow, Scotland, from October 31 to November 12. 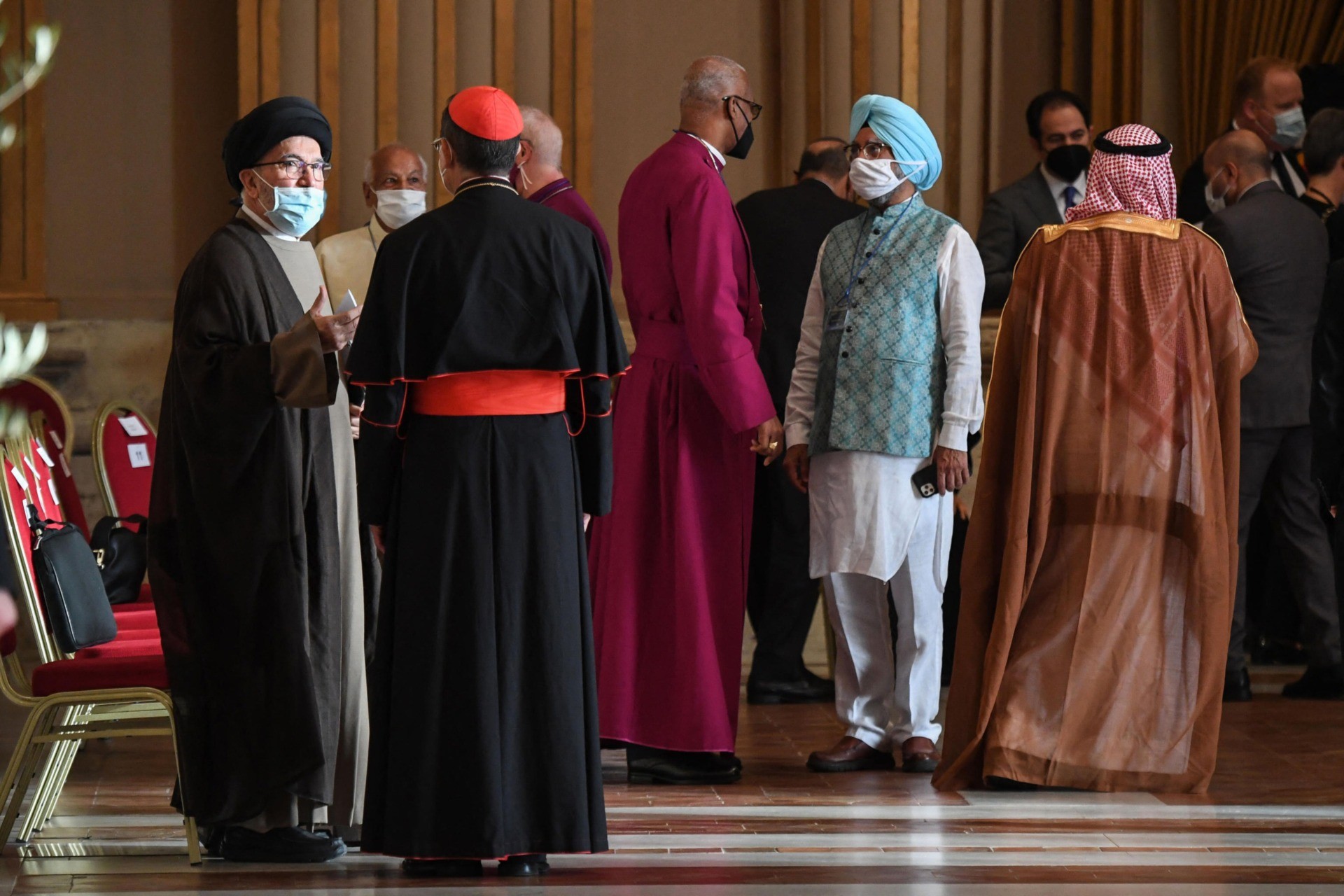 Religious leaders attend the meeting “Faith and Science: Towards COP26” on October 4, 2021 in The Vatican, sending an appeal to participants in the 26th United Nations Climate Change Conference, also known as COP26, scheduled from November 1 to 12 in Glasgow, Scotland. (Photo by ALESSANDRO DI MEO/POOL/AFP via Getty Images)

The document declares that damage to the environment results from “the predatory tendency to see the natural world as something to be exploited with disregard for the extent to which survival hinges on biodiversity and on maintaining the health of planetary and local ecosystems.”

“Multiple crises facing humanity are demonstrating the failures of such an approach; these are ultimately linked to a crisis of values, ethical and spiritual,” it states.

“Global temperatures have already risen to the point where the planet is warmer than at anytime [sic] in the last 200,000 years,” it continues. “We are on course for a rise in temperature of more than two degrees above the pre-industrial levels.” 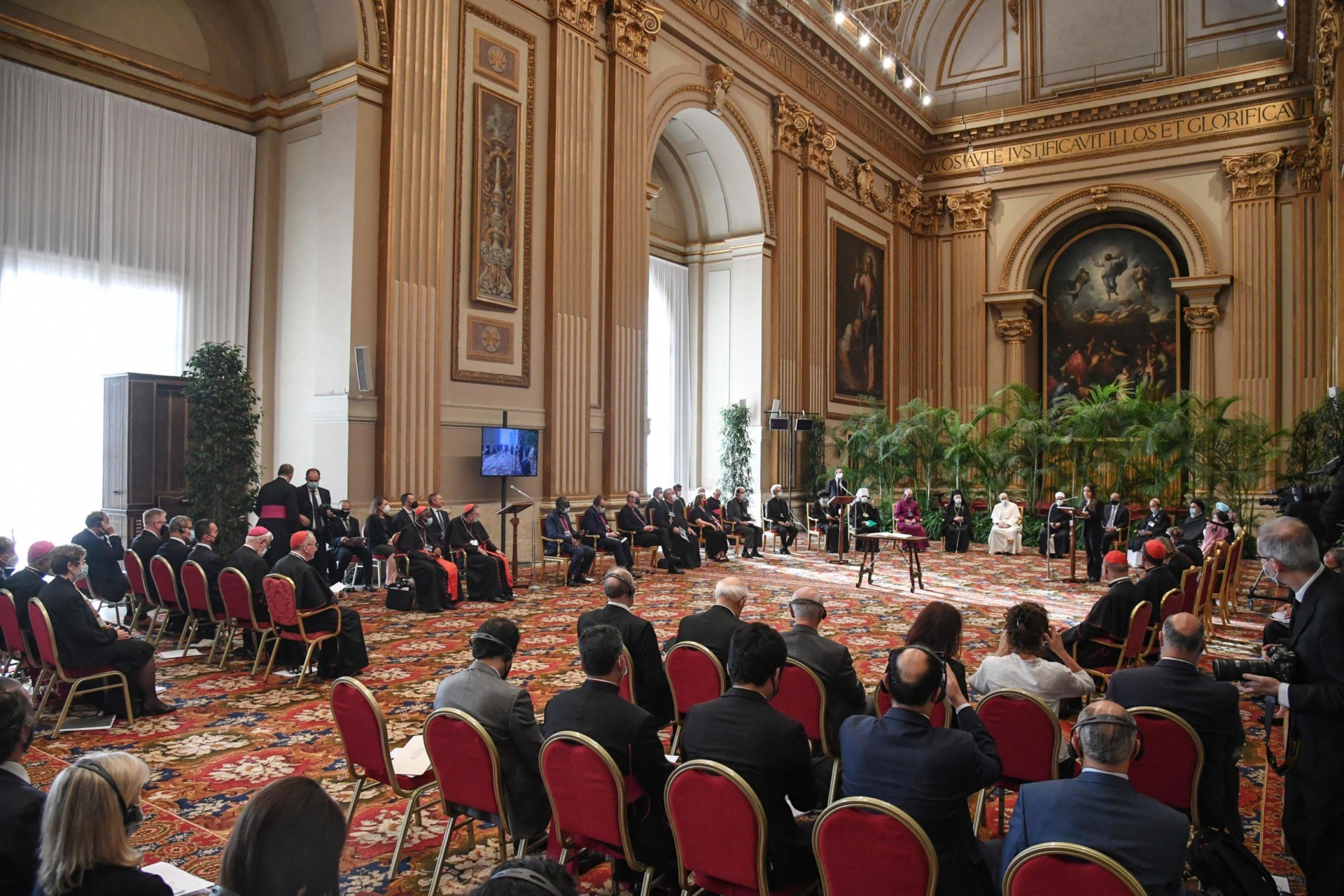 A general view shows Pope Francis (Rear R at center), religious leaders, politicians and scientists during the meeting “Faith and Science: Towards COP26” on October 4, 2021 in The Vatican, sending an appeal to participants in the 26th United Nations Climate Change Conference, also known as COP26, scheduled from November 1 to 12 in Glasgow, Scotland. (Photo by ALESSANDRO DI MEO/POOL/AFP via Getty Images)

“It is not just a physical problem but also a moral challenge,” the text asserts.

Reiterating their belief that the world faces a dire “climate crisis,” the signers insist that now is “the time for urgent, radical and responsible action.”

“Climate change is a grave threat,” the text affirms.

The appeal also urges governments to facilitate “a transition to clean energy” while also ending hunger and promoting “sustainable lifestyles and patterns of consumption and production.”

Echoing Pope Francis, the document calls for an “ecological conversion,” understood as “a change of heart among the members of our traditions in the way we relate to the earth and to other people.”

The signers also call for financial investments aligned with “environmentally and socially responsible standards, ensuring greater accountability and transparency as the tendency to move away from investments in fossil fuels and toward investments in renewable energy and restorative agriculture.”

“We seek to serve the people of the world, particularly the poor and the future generations, by encouraging a prophetic vision, a creative, respectful and courageous action for the sake of the Earth, our common home,” the text concludes.