Did you know that it’s illegal to take photographs of the Eiffel tower at night? Thanks to an obscure European Union (EU) law, publishing images of many buildings including the European Parliament is forbidden, and may result in prosecution.

This strange situation, which has resulted in images being blacked out in a fashion reminiscent of war-time censors has come about due to a quirk in a European Union law which is actually intended to give the freedom to photograph architecture in public spaces. Because the 2001 information society directive applies to almost all of Europe, but not Belgium, the home of the European Union and buildings including the headquarters of the European Commission can’t be reproduced online without permission.

This strange anomaly means, as reported by EUobserver that even members of the European Parliament who include photographs of their place of work on Facebook or their personal websites are breaking the law. In a typical European Union cock-up, lawyers discovered that the EU doesn’t even own the copyright to their own buildings, so they can’t give permission to anyone to take photographs of them – even themselves. 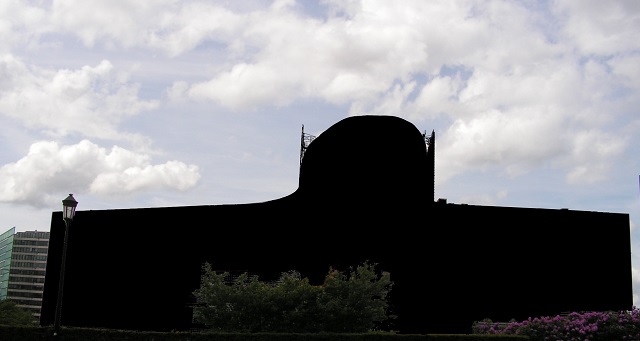 Above: The European Commission Headquarters

As well as government buildings, the directive also applies to well known landmarks whose architects are alive or have died within the past seventy years, such as “Europe’s strangest building” the Atomium in Belgium. Although the engineer who designed Eiffel Tower in Paris died in 1923, and the building is therefore ‘out of copyright’, the newer light show illuminations that can be seen at night are more recent, so you can legally photograph the tower during the day but not at night.

Although most are blissfully unaware of the laws, and the internet is awash with attractive images of the Eiffel Tower at night, and even the buildings of the European Union, some take their legal protection seriously. The website of the Atomium, which was built with public money to celebrate the 1958 world fair states: “any use of the image of the Atomium must be submitted to the organisation before it is published”.

The owners of the Atomium have threatened legal action to protect their rights in the past. Unlike Belgium, France, and Italy, the United Kingdom implemented the directive fully and was one of the only countries to do so. Citizens and visitors alike all enjoy the right to photograph public buildings in and out.