The Swedish government is showing their commitment to green principles and fighting climate change by spending tax payer money on developing ‘meat’ made out of crickets and mealworms.

Vinnova, the Swedish government agency that distributes money for research and development, spending some 2.7 billion kronor (£230 million) a year has announced its latest tranche of funding for creating a greener, more sustainable future — by weaning Europe off meat. It is hoped people will want to eat a so-called “climate smart” diet instead, reports FriaTider.

Green activists and the United Nations are behind such political initiatives as ‘Meat Free Mondays’ — a gateway to full vegetarianism — which are based on the premise that meat consumption is driving man-made climate change. Another method to reduce that so-called burden on the earth is replacing meat protein with that harvested from insects instead. 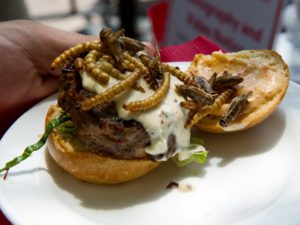 To that end, Vinnova is awarding half a million kronor each to fifteen different projects across the country, each of which tasked with creating an “edible prototype” of a new food.

Among the mouth-watering projects being funded are an attempt to produce a “good and healthy product from mealworms which are fed on vegetable food scraps to become a climate friendly source of protein”, “food prototypes” made from “refined mealworms”, and mincemeat made out of “climate smart insects” such as crickets.

Other enticing offerings not involving insects include “climate-fungal protein”, a “healthy vegetarian barbecue” made from by-products” and “fibrous raw materials”, and a “blue cheese-like product” made from beans.

A competition in November will select the best product, with a potential of an extra two million kronor investment from the government to get the “food” off the ground.

Speaking on the reasons for launching the initiative in their press release, Vinnova explains that insect-based nourishment will reduce food miles by encouraging interest in food grown in Sweden. They said: “Vinnova make an effort to develop climate-friendly proteins to help develop innovative, healthy and delicious food for the future, as an alternative to conventional meat production.

“The projects can also increase the Swedish food industry’s competitiveness by products that are developed based on raw materials that can be produced cost-effectively in Sweden”.

This is not the first time Sweden has attempted to kick-start interest in this food of the future. Last year the city of Stockholm launched a “climate-smart” cookbook which advocated insect larvae as an “environmentally friendly” pizza topping. According to press surrounding the release of the book “larvae tastes good! Freeze Dried caterpillars taste like cashew nuts with a gentle tone of the yolk”.