The traditionally liberal Netherlands will go to the polls Wednesday morning to select new members of parliament and perhaps a new government, and anti-mass migration, Eurosceptic Geert Wilders is fighting to come out on top in a contest which has seen his ratings dented in recent weeks.

Riding high in polls that would have seen him comfortably take over 30 of the 150 seats in the Dutch parliament, leaving his Party for Freedom (PVV) the largest force in national politics, recent polls have shown his lead diminished or even wiped out by the prime minister’s government conservatives.

The elections are the first in five years since the 2012 vote which was prompted by Wilders’ PVV pulling out of an informal agreement to support the conservatives as a junior partner. If Mr. Wilders’ PVV comes out of Wednesday’s vote the largest party, it could mean a major role reversal with the conservatives joining a populist-led coalition.

However, even if Mr. Wilders’ party performs in a way analogous to President Donald J. Trump in the U.S. and Brexit in the United Kingdom to defy last-minute bad polling to come out on top, his ambition to become prime minister could still be frustrated by a rainbow coalition of other parties uniting to keep him out of power. 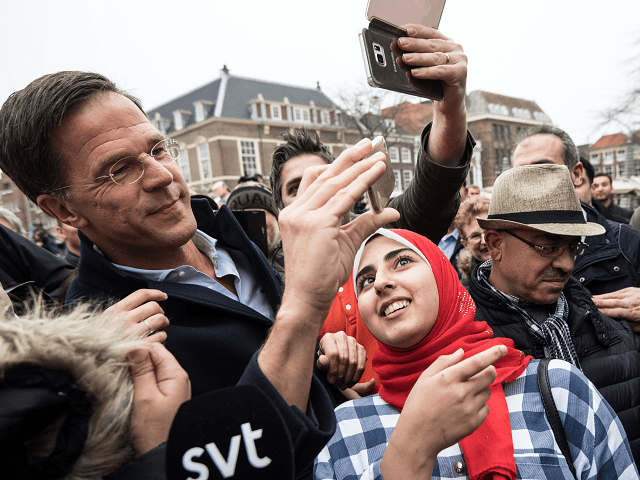 A so-called ‘purple’ coalition in Dutch parlance could see Prime Minister Mark Rutte’s conservatives or even the Socialist Party propped up by the dozen remaining smaller groups in a desperate effort to keep Wilders out, at any cost. Previous remarks by Rutte made clear he wasn’t interested in a coalition with Wilders, but the prospect of easy power without having to enter agreements with hard left parties could be too good to resist.

Despite the odds to overcome, Mr. Wilders remained in a combative mood on the last day of campaigning Tuesday, telling listeners on national radio that if they wanted the country to be flooded with migrants then they should consider voting for the left-wing green party.

Mr. Wilders has also been extremely vocal on the ongoing diplomatic spat between the Netherlands and Turkey, over the presence of Turkish ministers in the country for campaign rallies. Turkey is hosting a referendum in April over expanding powers for President Erdoğan and has been extensively courting the votes of Turkish migrants in Europe who still have the ability to cast ballots in their home nation.

Rhetoric between Turkey and the Netherlands has become heated, with Erdoğan going so far as to call the Dutch “Nazi remnants”. Following the remarks, Mr. Wilders demanded the government expel the Turkish ambassador, saying to do any less would be an insult to all of the Netherlands.