Meeting with the leader of the Christian Union in the last televised debate on the eve of Wednesday’s general election, Party For Freedom (PVV) leader Geert Wilders accused his opposite of failing to stand up for Christians, and said resisting Islam was a matter of survival for the Netherlands.

In the format of the election debate, which saw a number of short rounds of discussion between the leaders of the many political parties contesting Wednesday’s election, Mr. Wilders was allowed to introduce a motion which would then be debated. Revealing he had selected to discuss Islam, Wilders said he’d picked the topic not out of a lack of respect for his opponent, or that he was trying to trip him up, but given it was the last televised debate before the polls opened he thought it should be on the most important topic facing the Netherlands today.

Opening the discussion, Wilders, who was again seen to be wearing a special bullet and stab-proof vest modelled to resemble a waistcoat under his suit, said: “A country can be in an economic crisis, that’s an important topic, but with good national and international policy you can solve that problem. But this is an existential problem. This is the survival of the Netherlands… The future of our country and western civilisation is at stake, so I therefore chose to put this statement on the agenda.”

Remarking that political correctness and a willingness to give Islam “space to operate” in the Netherlands will “end up helping to destroy our constitutional state”, Wilders told the studio audience and millions watching at home:

Islam and democracy cannot coexist. And you can see that in, literally, every country in which Islam is dominant. We can see a total lack of freedom, you can see widespread violence and oppression, whether you are a Christian or Jew or whether you are an apostate or a critical journalist.

So I think that if we will defend ourselves and deal with Islam that we will not make our constitutional state and our democracy weaker, but stronger. And we need courage to do that, we will have to break the mould.

I don’t mean all people who support Islam, but Islam itself plays by different rules than we do. It doesn’t play by our rules, so if we play by our rules and Islam doesn’t do that then this means that at the end of the day, we will lose everything that we stand for. 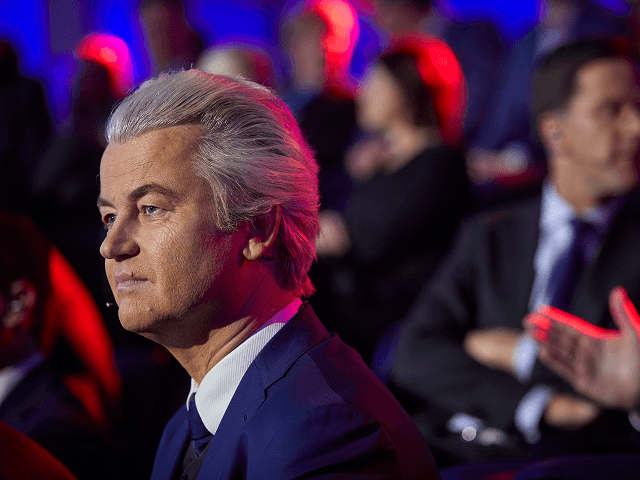 Mr. Wilders said the only policy point he had a major disagreement with the Christian party leader Gert-Jan Segers was over Islam, and accused him of letting Dutch Christians down.

Maybe this is the only political issue I have against your party, I do not understand why your party doesn’t fight more against Islamisation. Because Christians, just like in the Middle East, and the Jews, will be the first victims of Islamisation.

In every country where Islam is active and dominant, just like your [experience in] Egypt, the Coptic churches are bombed, the same things happen in Syria and elsewhere as well. We have to resist this! We shouldn’t accept that.

Your party always plays along with the left… you are a party that cooperated with the Socialist party and the Greens for more amnesty, for more asylum seekers — among whom there are terrorists — you only import more Islam and I don’t understand that.

I would really like to see you becoming an ally to protect the Christians in the Netherlands, but you don’t do that because you support open borders.

Segers rejected Mr. Wilders’ call to defend the Netherlands from Islam, accusing him of destroying the Dutch constitutional state in an effort to save it, obliquely comparing the Freedom Party leader to Islamist Turkish President Recep Tayyip Erdoğan because of his nationalist stance.

Rejecting the idea that he was letting down Christians, Mr. Segers said his party reflected the core Christian values of “neighbourly love and mercifulness” in welcoming Muslims to the Netherlands. Responding to the point, Wilders hit back saying: “You know better than I that Jesus doesn’t exist in Islam. They have Muhammad, a warlord, a paedophile, a man who beheaded Jews by the dozens.”

Millions of Dutch citizens are voting on Wednesday to select a new government. The late stages of the campaign have been somewhat overshadowed by disputes between the Dutch government and Turkey over the activities of Turkish ambassadors in the country. The disagreements have soured relations between the nations sufficiently so that Turkish President Erdoğan was motivated to call Dutch people “Nazi remnants”.

Mr. Wilders has performed strongly in polls, coming first in the majority of research over the past 12 months. This position has been weakened in recent weeks as the establishment Rutte-led conservative party regained some ground, while still standing well behind their position in the 2012 vote.