The latest issue of the left-wing German magazine Stern has portrayed U.S. President Donald Trump wrapped in an American flag whilst giving the Hitler salute, a gesture that is illegal in Germany.

The weekly magazine, noted for its left wing stance and popularity amongst supporters of the Social Democrat Party (SPD), released a preview of this week’s cover on its Facebook page. The new cover also contains the caption: “His fight! Neo-Nazis, Ku-Klux-Klan, racism: How Donald J. Trump fights hatred in America.”

Many commentators on Facebook criticised the company for the depiction of the U.S. President. One Facebook user said: “Erdogan interferes with us, so he’s bad. We interfere with the Americans and are the good ones. Double standard.”

Another user pointed out the fact that using the Hitler salute in Germany is a crime as it is illegal to willfully promote Nazism. They also noted that Germany has laws which forbid citizens from defaming foreign heads of state.

The law of defamation against foreign leaders is very rarely put into practice, but it was the subject of a great debate in Germany last year after comedian Jan Böhmermann was threatened with charges after reciting a lewd poem about Turkish President Recep Tayyip Erdoğan.

Whilst the Hitler salute is the most obvious attempt of the magazine to portray President Trump as a nazi, the caption “sein kampf” or “his struggle” also invokes the book Mein Kampf which was written by the Nazi leader whilst he was in prison after the failed 1923 Munich beer hall putsch.

Stern is no stranger to controversy since it began publication in 1948. The most infamous case being when the magazine published what it claimed were the diaries of Adolf Hitler, though they were later proven to be fake.

The magazine cover is not the first time German left wing magazines or newspapers have tried to paint the U.S. president as a racist. Der Spiegel has also produced a series of covers which depict Trump wearing a Ku Klux Klan hood. 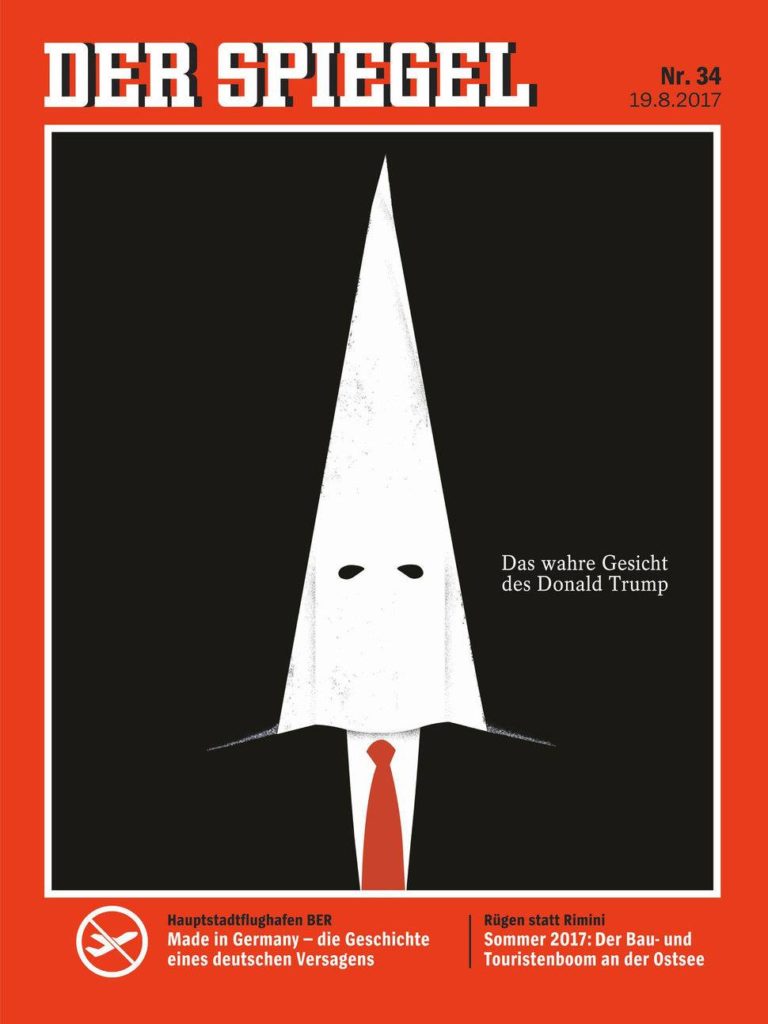 The magazine has also compared Trump to the Islamic State terror group in another cover which shows the president holding the severed head of the Statue of Liberty.

Most of the attacks have come from left wing publications but the most ominous came from Josef Joffe, the publisher-editor of the weekly newspaper Die Zeit, who appeared on a German TV political panel and said the best way to end the “Trump catastrophe” would be a “murder in the White House.”