Cases of syphilis and gonorrhea have risen by one fifth in England in just one year, mostly among gay men, according to a report released Wednesday by Public Health England (PHE).

The past year’s increase in syphilis diagnoses follows a 10-year upward spiral, with the number of cases increasing by 148 percent relative to 2008 — from 2,874 to 7,137 cases during this period.

PHE said that the number of syphilis diagnoses in 2017 was “the largest annual number reported since 1949.”

A similar trend can be noted in cases of another sexually transmitted infection (STI): gonorrhea.

While among MSM syphilis and gonorrhea showed the highest increases in 2017, a third type of venereal disease—chlamydia—also registered significant one-year growth of 17 percent, from 12,626 to 14,765 cases. Chlamydia accounted for 31 percent (15,284) of all new cases of STI’s in men who have sex with men. 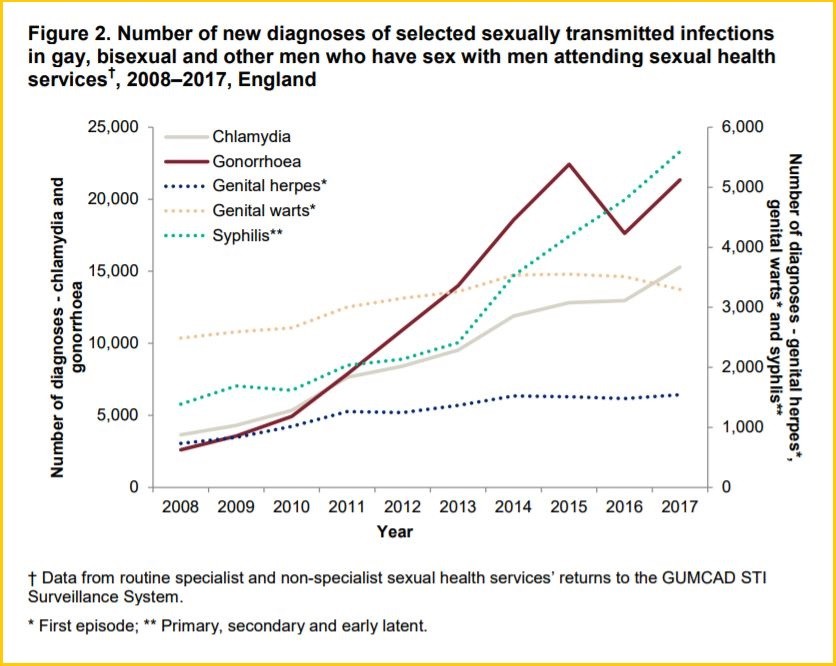 Despite the notable increases in new cases of syphilis and gonorrhea, the overall number of new STI diagnoses in England actually decreased slightly in 2017, due to a decline in the number of cases of genital warts and non-specific genital infections (NSGI), as well as a slight drop (2 percent) in chlamydia diagnoses among 15- to 24-year-olds.

PHE announced it is working with partner organizations to develop an action plan to address the rise in the number of cases of syphilis and gonorrhea. The plan will aim to increase numbers and frequency of tests in populations at higher risk of infection, to promote early detection and treatment.

“MSM should test annually for HIV and STIs and every three months if having condomless sex with new or casual partners,” PHE stated.