Meghan Markle’s estranged father took to UK television on Tuesday morning and made a very public plea to be allowed to see his grandchildren.

Thomas Markle, 77,  told ITV’s Good Morning Britain program “we’re at a point where I think both of us, we should grow up, talk, make up for the sake of the children. This is ridiculous, almost four years, it’s crazy,” he said.

Neither grandson Archie, born in 2019, or granddaughter Lilibet, who was born in June, have yet to meet their Mexico-based grandfather.

“My message for the kids is that they have two loving families,” Markle Snr. said, alluding to the fact he has been cut off by his daughter ever since her wedding.

“Their great grandmother is the Queen of England, and I think it’s important for them to know that they have two families and eventually they’re going to grow up and they’re going to want to know more about them.”

The Emmy winning former lighting director claimed former actor Meghan, who became the Duchess of Sussex on marrying Prince Harry, had wanted him to stop talking to her step-sister and step-brother, “and I couldn’t”.

“She’s never been that way before. And once she hooked up with Harry, she changed,” he lamented.

Thomas repeated his entreaty for the families to “talk to each other” saying he had not heard a word from Meghan or her inner circle since 2018 and time was not on his side. 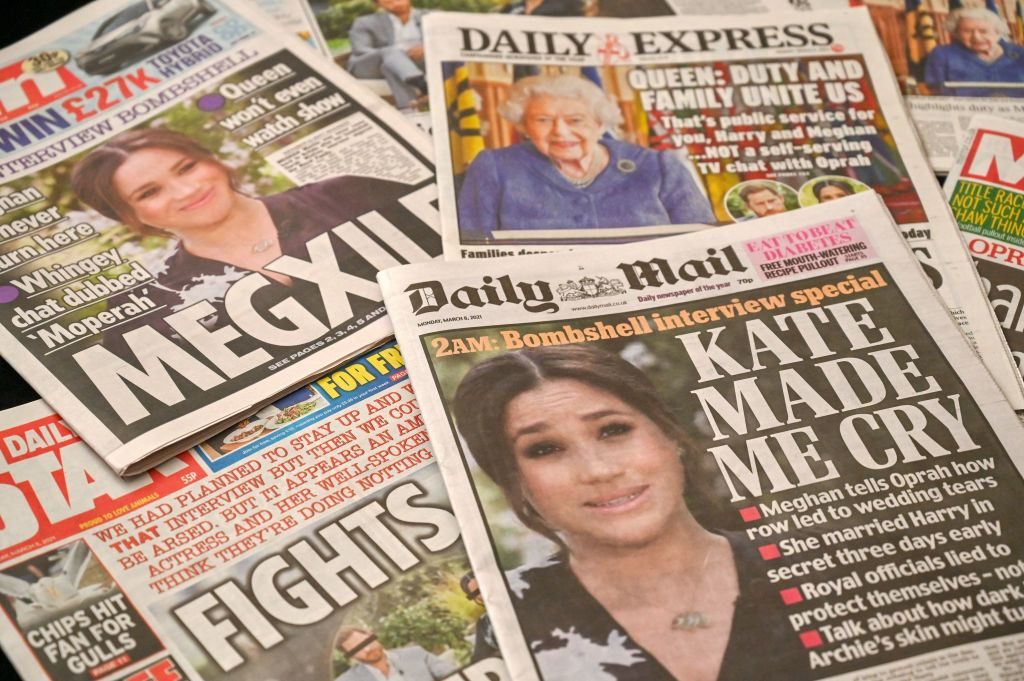 A selection of UK daily newspapers shows front page headlines on the story of the interview given by Meghan, Duchess of Sussex, wife of Britain’s Prince Harry, Duke of Sussex, to Oprah Winfrey. (BEN STANSALL/AFP via Getty)

Meghan told Oprah Winfrey in their 90-minute March interview she felt her dad had betrayed her because he apparently lied about speaking to the press before her wedding, as Breitbart News reported.

She said at the time: “He wasn’t able to (tell the truth). And that for me has really resonated, especially now as a mother.

“I look at Archie, I think about this child, and I go I genuinely can’t imagine doing anything to intentionally cause pain to my child. I can’t imagine it. So it’s hard for me to reconcile that.”

The polling has made clear that Prince Harry and Meghan Markle's weekend appearance with Oprah Winfrey was a big mistake. https://t.co/INK300GpwW

Thomas separated from Meghan’s mother Doria Ragland when the duchess was young.

Raglan was at her wedding at Windsor Castle and joined Queen Elizabeth II for tea.