A report on the series of “partygate” gatherings in Downing Street has called on Prime Minister Boris Johnson’s government to take “responsibility” for failing to abide by the draconian lockdown measures that were inflicted on the general public.

The long-awaited report from civil servant Sue Gray was initially released in January, albeit heavily redacted due to an ongoing police investigation into the matter at the time. In her January briefing, Gray accused the government of having demonstrated “serious failures” of judgment and leadership.

Ms Gray independently chose to redact her report again on Wednesday, deciding to blur the faces of junior staff members and withhold their names from the public. In the pictures released, only Prime Minsiter Boris Johnson, Chancellor Rishi Sunak, and Cabinet Secretary Simon Case are shown, with Gray’s Civil Servant colleagues having their faces blurred.

Commenting on her findings, Gray wrote: “Many will be dismayed that behaviour of this kind took place on this scale at the heart of Government. The public have a right to expect the very highest standards of behaviour in such places and clearly what happened fell well short of this.

“The events that I investigated were attended by leaders in government. Many of these events should not have been allowed to happen. It is also the case that some of the more junior civil servants believed that their involvement in some of these events was permitted given the attendance of senior leaders.”

“The senior leadership at the centre, both political and official, must bear responsibility for this culture,” Gray concluded. 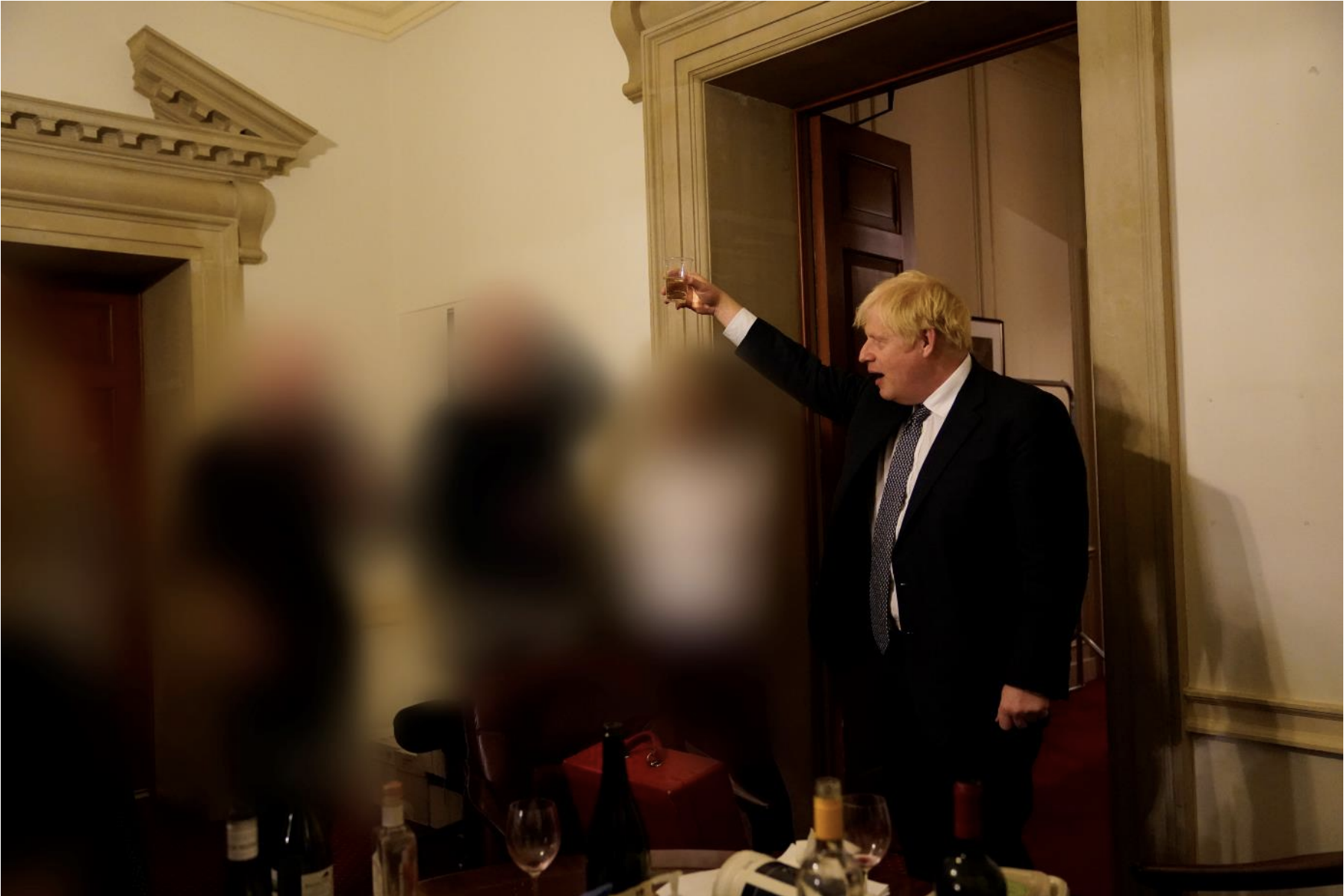 13 November 2020; a gathering in No 10 Downing Street on the departure of a special adviser. Sue Gray report.

One of the events illustrated in the Gray report underlines the banality of the breaches, photographs published showed melamine cafeteria trays bearing pre-packed supermarket-style sandwiches, pitchers of fruit juice and what appears to be a number of red cola cans lying on the Cabinet Office table around which the government’s business is typically transacted.

At least one of the sandwiches is turned towards the camera and bears the packaging of British premium supermarket Marks & Spencer.

This dour event, the report notes, was the Prime Minister’s own birthday, and claims in its write up that in addition to the spread of supermarket sandwiches, there was also a cake and “cans of beer”.

Top Civil Servant Martin Reynolds emailed staff at Downing Street: “Do come along and wish the PM happy birthday”, but given it was a surprise party, Gray notes that neither Boris Johnson nor his cabinet colleague Rishi Sunak knew what was happening in advance.

Another instance recorded in the report recounted an event put on for the departure of an unnamed “Number 10 official” which is said to have lasted “a number of hours”, left at least one staff member “sick”, and featured a “minor altercation between two other individuals.” 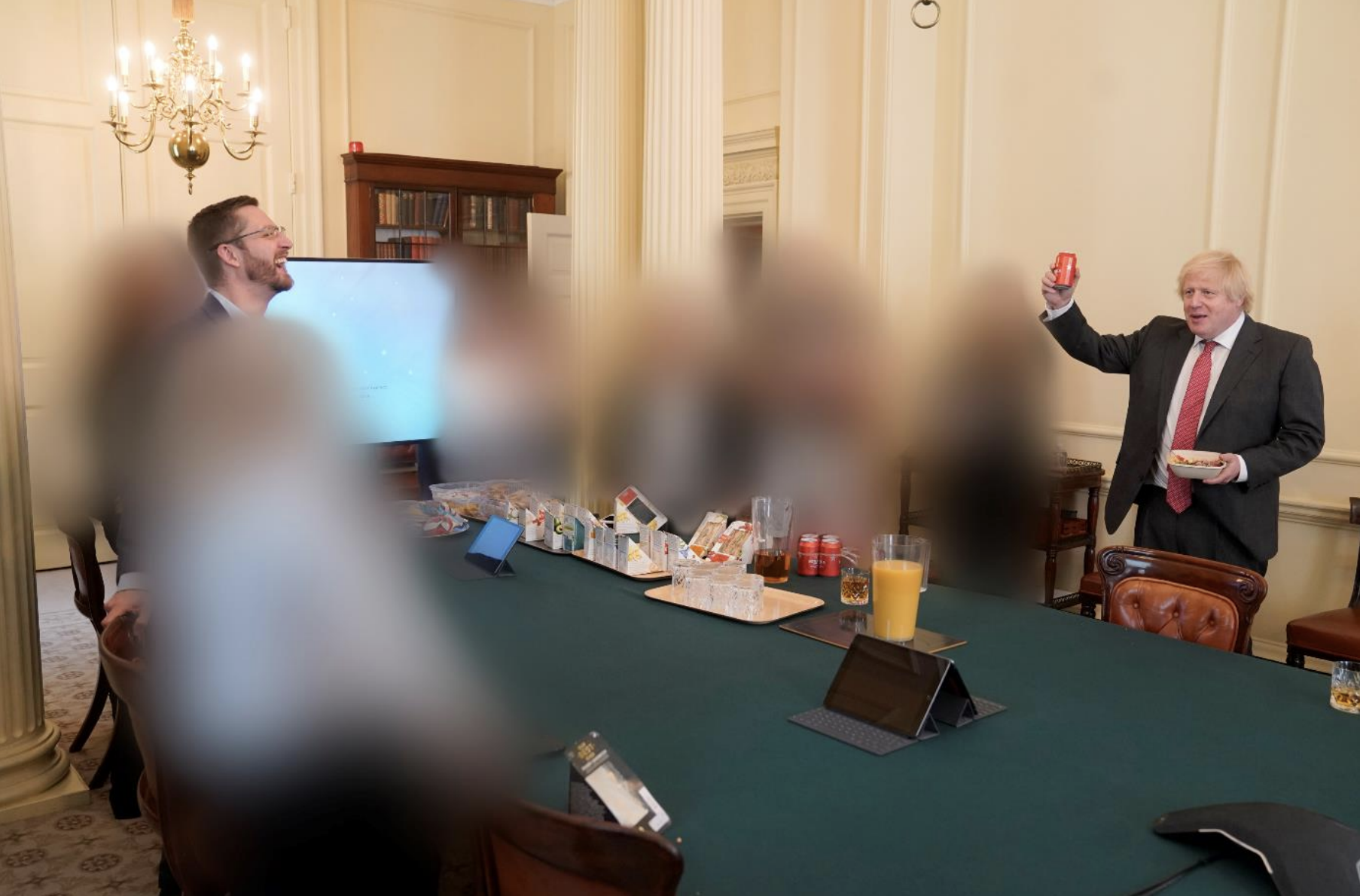 The so-called partygate scandal began in December when an image of Mr Johnson and his now-wife Carrie Johnson and other officials partaking in what appeared to be a wine and cheese party in the garden of the PM’s official residence at Number 10 Downing Street in May of 2020 when such gatherings were prohibited by the government’s own draconian lockdown measures.

Since then there has been a steady stream of leaks to the media of various instances of apparent lockdown breaches by the government.

Indeed, on Tuesday, the BBC claimed to have spoken to Downing Street insiders who said that boozy get-togethers were so common in the government during the lockdown that they occurred “every week”. The report went on to claim that the government had a routine of hosting “Wine-Time Friday” at 4 pm at the end of the week.

So far, there have been 126 fines issued to 83 people in the government for lockdown violations, including both Prime Minister Boris Johnson and Chancellor of the Exchequer Rishi Sunak. 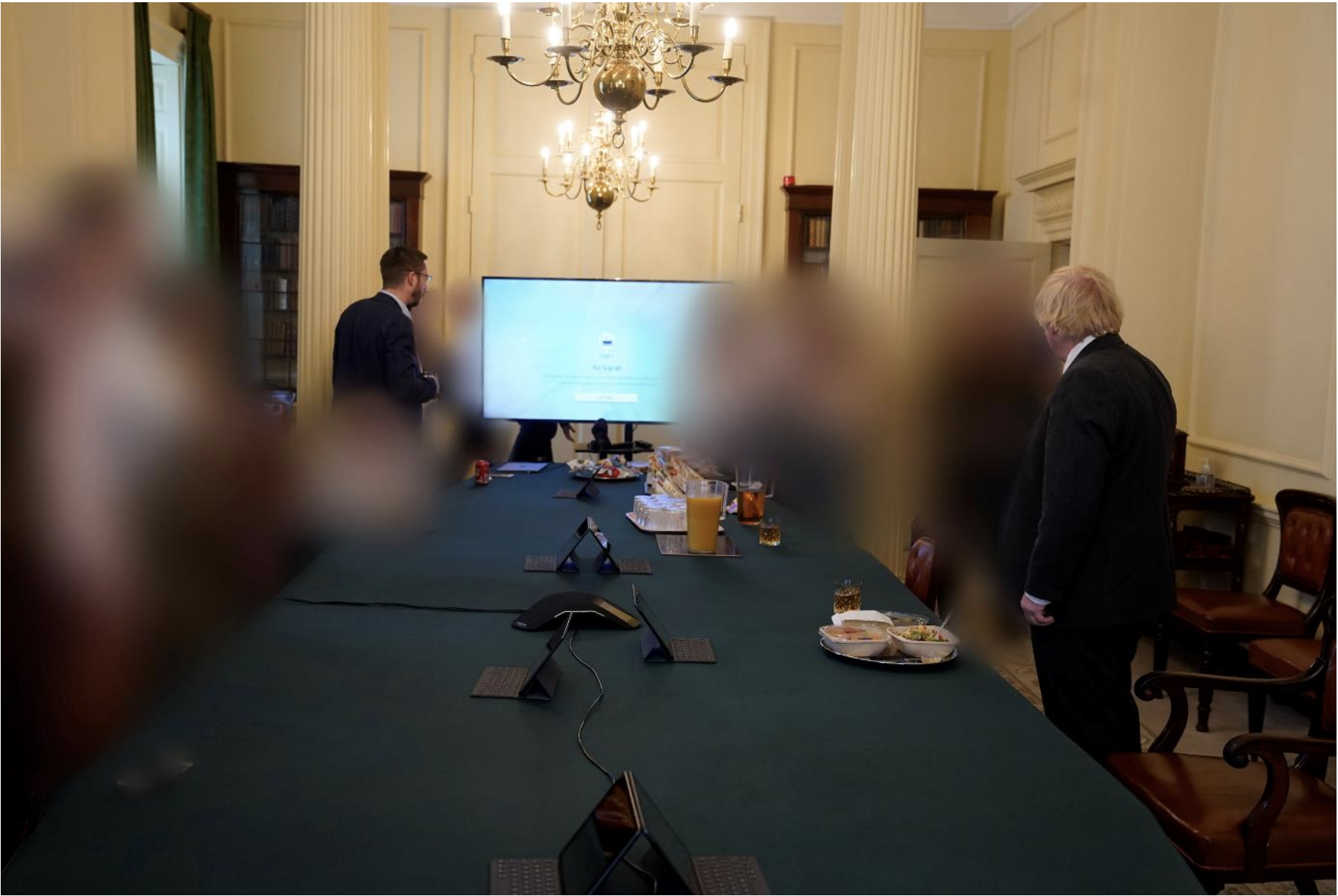 Following the publication of the report, an investigation will be held by the Privileges Committee in the House of Commons to determine if the Prime Minister mislead the Parliament. While Mr Johnson has apologised on several occasions, he has not gone so far as to admit having lied to the public or indeed the Parliament.

Commenting ahead of the report Environment Secretary George Eustice said that a “culture developed” in Downing Street during the lockdown in which staff “would have a drink at the end of the day” but “that boundary between what was acceptable and what wasn’t got blurred and that was a mistake”.

The Prime Minister has seen some in the Conservative Party come to his defence, however, with Cabinet minister Jacob Rees-Mogg saying last week that the scandal was “fundamentally trivial”.

“When we look back in 36 years at partygate, people will think, ‘What were they on about? They were passing from Covid and dealing with that to Russia and Ukraine… yet they were distracted by whether or not the prime minister spent five minutes in his own garden, or 25 minutes, whatever it is,” Rees-Mogg said.

On Tuesday, the prime minister was also defended by Conservative MP Peter Boone, who described Mr Johnson as an “honest man” and said that he would not have been in charge of day to day operations within Downing Street. 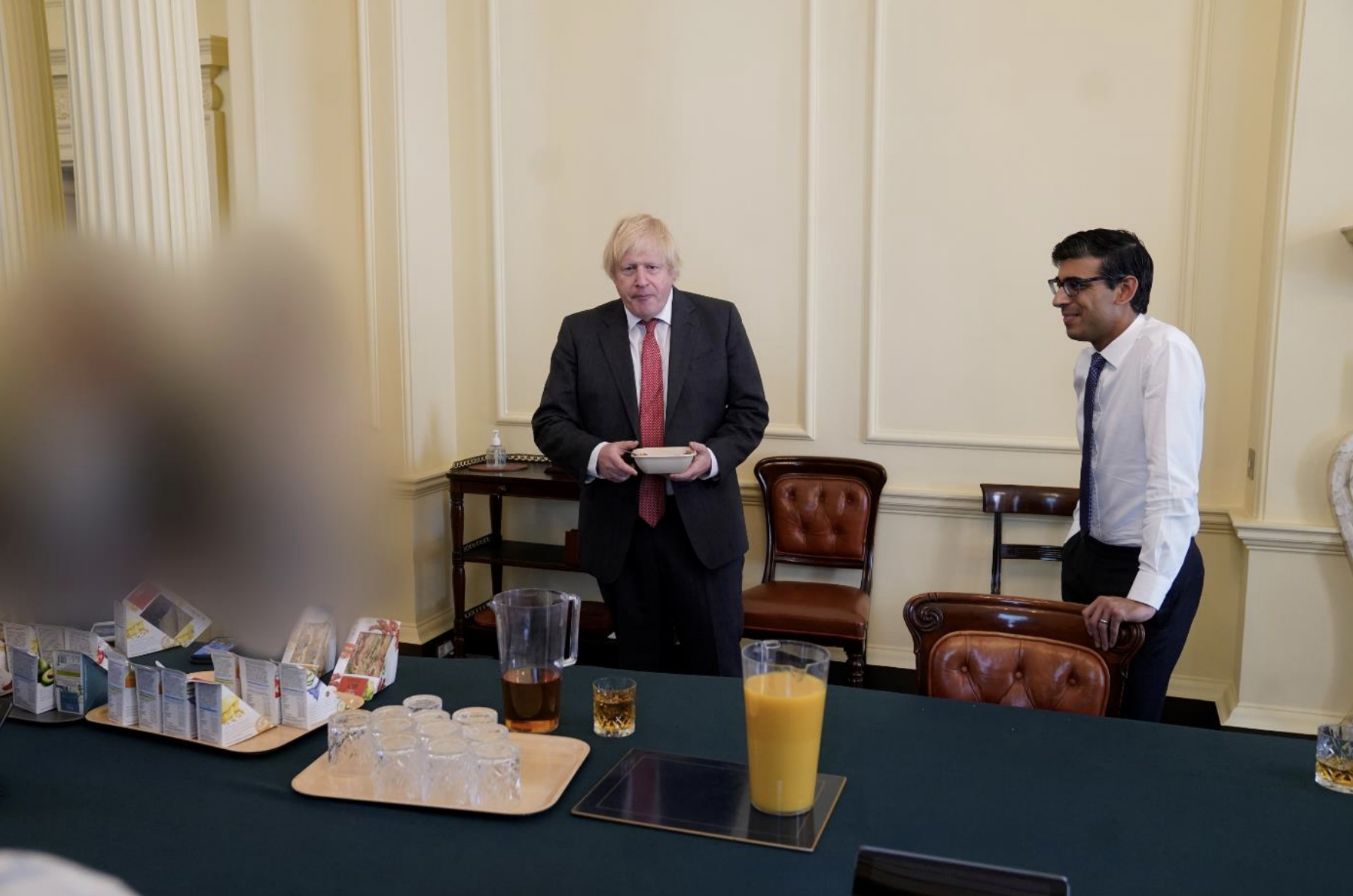 The PM has seen his position within the governing Tory Party partially solidified in recent weeks by becoming one of the most aggressive and involved world leaders in Russia’s ongoing war in Ukraine, prompting previously critical MPs such as former Conservative leader Sir Iain Duncan Smith to rally around Johnson.

Mr Johnson’s position has also likely been propped up by the less than stellar performance from the opposition Labour Party during this month’s local elections, despite months of partygate scandals and the burgeoning cost of living crisis befalling the nation.

The inability of the Labour Party to crack through electorally has in part been attributed to leader Sir Keir Starmer facing a lockdown scandal of his own, dubbed “beergate” in which he and other Labour officials were pictured drinking beer and eating curry after work hours in Durham, leading to another police investigation and accusations of hypocrisy.

Starmer, who has frequently called on the Prime Minsiter to resign, has claimed that he will step down should the Durham police find that he violated the lockdown laws.

Following the release of the report, Johnson will meet with the 1922 Committee of backbench MPs — which has the power to launch a leadership battle — in order to try to once again sure up support from the Conservative Party ranks.