A new promotional video released by Planned Parenthood features four “people of faith” attempting to make the case that pro-life religious leaders have “co-opted” the faith message about abortion.

None of the “people of faith” ever mentions the word “abortion” in the video, but they do use the abortion industry’s preferred euphemism, “reproductive justice.”

“The idea that there is just one monopoly on a religious voice, that is not true, that has never been true and that will never be true,” states Rev. Darcy Roake, a minister of the Unitarian Universalist church who also serves on Planned Parenthood’s clergy advocacy board.

Pew refers to the Unitarian Universalist Association (UUA) as a “liberal faith,” as shown in a survey in which 77 percent of those Unitarians and other liberal faith members polled said they “seldom or never” participate in prayer, scripture study, or religious education. Similarly, 79 percent said “right or wrong depends on the situation,” and 78 percent responded that abortion should be “legal in all or most cases.”

“When people of faith speak up for reproductive justice, compassion becomes the order of the day.” https://t.co/fn7L961d4R pic.twitter.com/gqNDTVS67H

“The faith message has been co-opted,” says Pastor Earle Fisher of Abyssinian Baptist Church, who equates his support for Planned Parenthood with “mak[ing] sure those who are being oppressed will receive the type of support and advocacy they need.”

“It makes sense for us to support the work of Planned Parenthood,” he continues.

Koffman is a leader of a Jewish community that describes itself as “exceptionally welcoming and inclusive.”

A blog post on the community’s website features two “dads” – one of whom is a biological woman who is pregnant and living as a man. 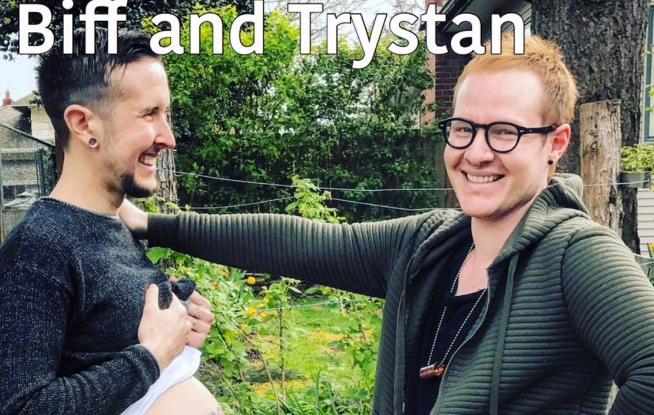 Trystan is transgender–and has been pregnant before, but suffered a miscarriage around six weeks. For any parent, this is devastating but for Trystan, it was especially complicated because trying to become pregnant means he couldn’t take testosterone. This was why the couple decided to try again shortly after the miscarriage–which the couple discussed on the WNYC podcast, the Longest Shortest Time.

“When people of faith speak up for reproductive justice, compassion becomes the order of the day,” states Timothy MacDonald III, senior pastor of First Iconium Baptist Church in Atlanta, Georgia.

In the summer of 2015, following the release of Center for Medical Progress’ videos that led to allegations that Planned Parenthood profits from the sale of the body parts of aborted babies, the organization’s clergy advocacy board responded:

The fact that the attacking organizations use fraudulent and extreme tactics to spread false allegations about Planned Parenthood’s role in tissue donation is theologically and morally reprehensible. The scriptures of Judaism, Christianity, and Islam strongly and repeatedly condemn dishonesty and hate. Planned Parenthood facilitates tissue donation for those who choose it, knowing that it fulfills the donor’s wish and contributes to the advancement of medical research. We are grateful to everyone who chooses to donate and fully respectful of all who do not.

“People who work for Planned Parenthood give care and respect to those in need, doing God’s work,” the board added.