LGBT promoter Father James Martin has questioned whether the biblical condemnation of homosexual behavior may be mistaken, referencing the example of slavery.

Citing a recent essay on the topic as “interesting,” the Jesuit priest tweeted late Wednesday:

Where the Bible mentions [same-sex sexual] behavior at all, it clearly condemns it. I freely grant that. The issue is precisely whether the biblical judgment is correct. The Bible sanctioned slavery as well and nowhere attacked it as unjust. 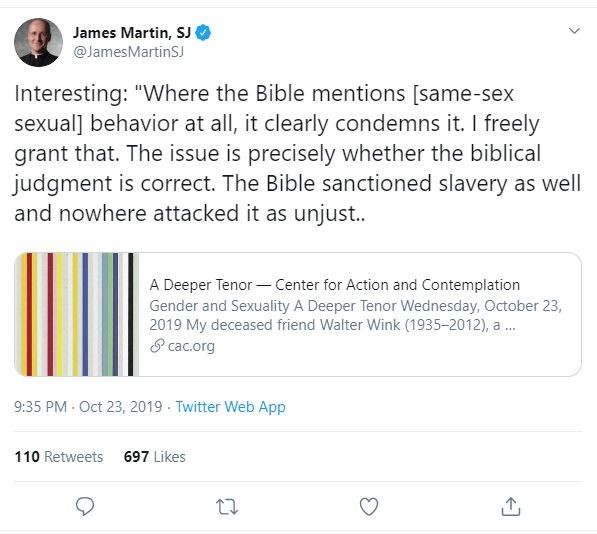 After receiving an avalanche of responses both supportive and critical, Father Martin doubled down by citing another line from the article that questions the authority of Sacred Scripture for teaching moral truth: “Are we prepared to argue today that slavery is biblically justified?”

One of those who responded to Father Martin was Bishop Joseph Strickland of Tyler, Texas, who said it was his duty as pastor to oppose the priest in his assertions regarding the morality of homosexual sex.

“Thank you for acknowledging that you question scripture,” the bishop tweeted. “If we go down that road where do we stop? I know you have lots of support but you are challenging the Deposit of Faith that I promised to defend. As a bishop I’ll keep defending it.”

Bishop Strickland was not alone in thanking Father Martin for finally coming clean on where he stands personally regarding homosexuality. In the past, the priest has said he supports Catholic teaching on the morality of homosexual sex, a position at odds with his most recent revelations.

Martin has been repeatedly criticized by Catholic prelates for refusing to call active homosexuals to conversion instead of merely affirming them in their behavior.

Other respondents to Martin’s tweet on social media took issue with the priest’s assertions regarding the biblical position on slavery, linking to articles that show how the biblical treatment of slavery evolved considerably from certain sections of the Old Testament to the way it is treated in the New Testament.

Earlier this month, Pope Francis received Father Martin in a 30-minute private audience in the Vatican, which the Jesuits called “a highly significant public statement of support and encouragement.”

“Father Martin is well known as a public speaker, author and for his pastoral ministry to L.G.B.T. people,” Gerard O’Connell Monday in the Jesuits’ flagship magazine America.

The pope’s “public statement of support” for the priest came just days after several U.S. bishops voiced concerns over the “ambiguity” of the Martin’s words and actions regarding homosexuality.

“Father Martin’s public messages create confusion among the faithful and disrupt the unity of the Church by promoting a false sense that immoral sexual behavior is acceptable under God’s law,” wrote Bishop Thomas John Paprocki of Springfield, Illinois, in a statement on the diocesan website.

Those who experience same-sex attraction need the Church’s support “in the Christian struggle for virtue, sanctification, and purity,” the bishop said, while Father Martin “either encourages or fails to correct behavior that separates a person” from God’s love.

According to one Jesuit priest, some 50 percent of the members of the Jesuit order are homosexuals.

“Roughly half of the Society under the age of fifty shuffles on the borderline between declared and undeclared gayness,” wrote Father Paul Shaughnessy, S.J., in a 2002 essay in the Weekly Standard, titled, “Are the Jesuits Catholic?”