The number of drug deaths dropped sharply in 2018 after 28 years of rising casualties, and Americans’ life expectancy also reversed its decline, rising by one month to 78.7 years, according to the U.S. Centers for Disease Control and Prevention.

The drop in drug deaths saved roughly 2,900 lives, and it follows a massive death spike under President Barack Obama, whose progressive deputies did little to discover or curb the massive spike in deaths from opioids and fentanyl shipped from Mexico and China. “The age-adjusted rate of drug overdose deaths increased … by 2% per year from 2006 through 2013, and by 14% per year from 2013 through 2016,” the CDC reported. 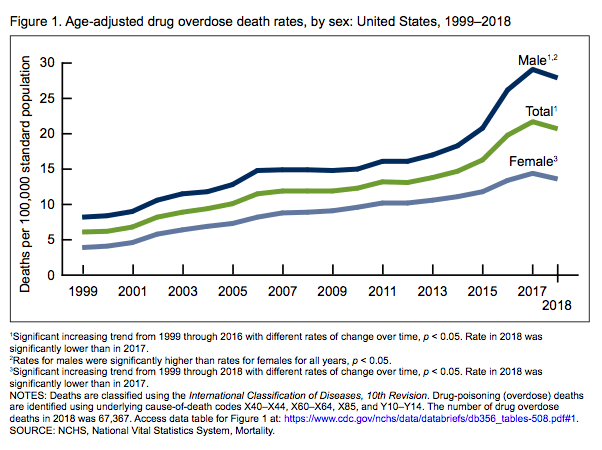 In May 2016, a group of national health experts issued an urgent plea in a private letter to high-level officials in the Obama administration. Thousands of people were dying from overdoses of fentanyl — the deadliest drug to ever hit U.S. streets — and the administration needed to take immediate action. The epidemic had been escalating for three years.

Under President Donald Trump, the death toll has dropped by 4.5 percent — or roughly 2,900 lives per year — amid a growing economy that is pulling sidelined Americans back into jobs. That gain is aided by Trump’s rejection of business demands for more migrants, and his increased actions against drug smuggling from Mexico and China. The partial recovery is showcased by a January 30 report in the New York Times:

“It’s literally like coming out of a fog,” said Andrew Wright, 34, who has been drug-free since August 2018, when he entered treatment at the Counseling Center in Portsmouth, Ohio. Medicaid, the government insurance program, covered his care. “It’s like I’m 22 and I’ve finally made it out of my parents’ house, embracing life for the first time. I’m learning how to live.”

… he has now stayed off drugs for the longest period in his adult life, he said, a fact he attributes to his treatment program together with a change in the attitudes of the people in his town. A small grooming products company, Doc Spartan, hired him to make beard oil and grenade-shaped soap. Someone sold him a cheap car. Others helped him start sorting out his life — getting driver’s license, dealing with his unpaid bills and getting treatment for hepatitis C.

“I literally feel like I’m a soldier in this war, and I really like it,” said Mr. Wright, who now works as a trainer at PSKC, a CrossFit gym, and at a halfway house.

The U.S. Centers for Disease Control and Prevention reported January 29:

The death toll fell in several midwest states which had been hit hard by outsourcing and free trade:

The drug overdose death rate was higher in 2018 than in 2017 for 5 states: California, Delaware, Missouri, New Jersey, and South Carolina.

But the good news is mixed with bad news:

The death rate from “synthetic opioids” — such as fentanyl — grew slower than in prior years, while the deaths from heroin and opioids fell: 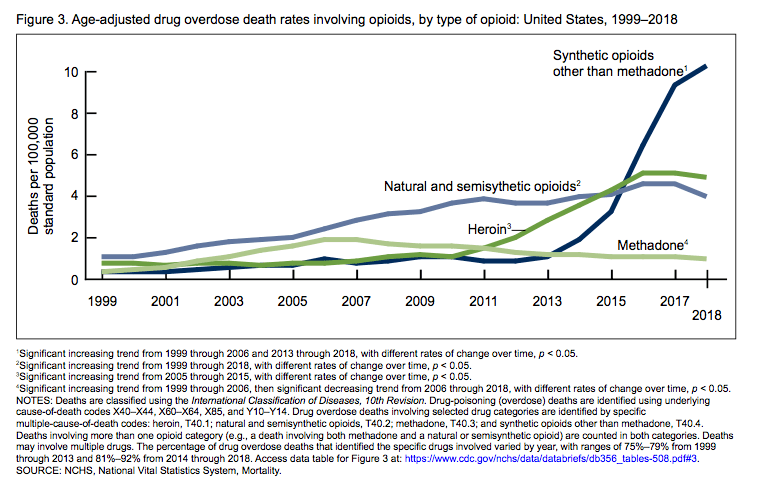 Better cancer treatments also saved many lives and to extend lifespans to 78.7 years, according to the CDC. The New York Times reported:

Improvements in cancer mortality rates represented the single largest share of the life expectancy gain in 2018, about 30 percent. Next came the decline in so-called unintentional injuries, which include deaths from car accidents and drug overdoses. That category accounted for about 25 percent of the gain, a change that was driven almost entirely by a decline in drug deaths …

But life expenctancy remains below the 2014 peak, according to a January 30 report in the Washington Post:

A decline in the death rate from cancer is the single largest driver of the small increase in life expectancy, the CDC reported. Five of the other nine leading causes of death also showed declines in death rates, including the top cause, heart disease, as well as unintentional injuries (which include overdoses), chronic lower respiratory diseases, stroke and Alzheimer’s disease. Two more, diabetes and kidney disease, were essentially unchanged. Deaths from suicide and influenza and pneumonia increased.

Despite the encouraging elements of the CDC mortality report, the broader pattern for American health remains sobering. Life expectancy improved by the tiniest of increments, from 78.6 to 78.7 years. That figure remains lower than the peak in U.S. life expectancy, at 78.9 years, in 2014.

“It’s good news that there was an increase in life expectancy. That’s what we want to see, but it doesn’t really alter the long-term picture. We still have a very bleak situation at this point,” said Steven H. Woolf, director emeritus of the Center on Society and Health at Virginia Commonwealth University.

In October 2019, federal data also showed that Trump’s policies have also reduced the murder rate in the United States.

Nationwide, homicides spiked to 15,195 in 2016, up from 12,278 murders in 2014 when Obama and his progressive and media allies began blaming police forces for multiple episodes in which young black men were killed.

Since then, Trump has ended the White House support for the Black Lives Matter movement, and the number of murders was forced down to 14,123 in 2018, according to new FBI data. The murder rate dropped by 6.8 percent from 2017 to 2018, saving more than 1,000 lives.

Thanks to our pro-worker, pro-American economic policies, unemployment is at the lowest level in more than 50 years. We have created over 7 MILLION new JOBS. More Americans are working today than EVER before. We have the hottest ECONOMY on earth! pic.twitter.com/TRGKRF7xgQ