This is a breakdown of the projected American coronavirus death count per various experts, including the Centers for Disease Control and Prevention (CDC).

You will find no opinion in this piece, and this is not me engaging in alarmism. All I’m doing is passing along what we’re being told by the experts.

Fatality Rate of One Percent

According to the CDC, the coronavirus fatality rate is one percent.

This number comes directly from Wednesday’s congressional testimony from Dr. Anthony Fauci, the director of the National Institute of Allergy and Infectious Diseases.

That one percent is ten times more lethal than the flu.

The good news is that one percent is a lot lower than the 3.4 percent fatality rate the World Health Organization was throwing around a few days ago.

According to Congress’s in-house doctor, Dr. Brian Monahan, “He expects 70-150 million people in the U.S. — roughly a third of the country — to contract the coronavirus,” per reporting from the far-left Axios.

Axios adds that Monahan’s estimate “is in line with other projections from health experts.”

The lowest estimate of American deaths I could find — at least from a respected expert — comes from infectious disease specialist Michael Osterholm, who “conservatively” predicts 480,000 American coronavirus deaths by the end of the year. That’s 480,000 deaths, not cases.

“We conservatively estimate that this could require 48 million hospitalizations, 96 million cases actually occurring, over 480,000 deaths that can occur over the next three to seven months,” he told Joe Rogan this week.

Key point there is “over the next three to seven months,” meaning before the end of the year.

These Are NOT Worst Case Scenarios

None of these experts are qualifying their predictions with phrases like “worst case scenario,” or “if we do nothing,” or “if we just let it ride.” In fact, Osterholm very carefully used the word “conservatively,” which strikes me as his best case scenario.

What’s more, all of these expert estimates were made with the government already taking precautions, so I don’t know how to interpret these estimates as anything other than “these are the numbers based on what we’re doing now.”

Here’s a report telling us the “low end of the projection … with containment” is 700,000 American deaths:

Anthony Fauci, head of the National Institute of Allergy and Infectious Diseases (NIAID), told the hearing: “We really need to be careful with those kinds of predictions because that’s based on a model.”

He added that “all models are as good as the assumptions that you put into the model” and that with containment and mitigation the upper end of the projection could be avoided.

About 80 percent of coronavirus cases are mild, and the overall mortality rate is around one percent, according to the latest estimate provided by Fauci to Congress on Wednesday.

At the low end of the projection this would mean about 700,000 deaths. At the high end it would mean 1.5 million deaths.

Here is an “Expert Panel” report (those are not scare quotes, that’s what the panel is called) that says it’s too late to stop this and 1.5 million Americans will die in the next 12-18 months [emphasis original].

Citing experts, Andy Slavitt, the former Medicare, Medicaid chief for Barack Obama, says, as of March 13, two days after President Trump’s Oval Office address and one day after we effectively shut down our economy, that it’s too late to stop one million Americans from dying.

Currently experts expect over 1 million deaths in the U.S. since the virus was not contained & we cannot even test for it.

This will be recorded as a major preventable public health disaster. I will try to relate what I learned from a long day of calls about what is happening.

So there you have it. Even with “containment,” even with everything we are doing now, 700,000 to 1.5 million dead Americans.

So… According to the experts…

70 million to 150 million Americans get sick.

Let’s do the math…

Experts estimate — and again these are not numbers being cushioned as worst case scenarios — 900,000 dead American before the end of the year.

Average of 3,061 American Deaths Per Day

My goal here is only to break these numbers down into pieces we can all comprehend. The spread of a virus is exponential, not logical. This means more and more people get sick and die every day. I am not trying to figure out what those numbers will look like. All I’m doing is presenting the math in a way that’s hopefully easier to wrap our minds around, and this is the best way I can think of…

There are 294 days between now and the end of the year. Again, this is not how a virus works, but according to the expert estimates, starting tomorrow, by the end of the year an average of 3,060 Americans will die every single day.

The experts are telling us an average of 3,060 America will die every day through the end of this year… This is a startling and terrifying number, an unthinkable explosion of deaths based on what’s happened so far…

When you realize that, thus far, over the three months of this worldwide outbreak, that the worldwide death toll sits at (as of this writing) 4,700, estimates of an average of 3,060 deaths per day — not worldwide, but here in America — are simply incomprehensible and absolutely terrifying.

In the United States, over the month or so since the virus first struck, 38 have died. And here is a screenshot of the cases reported so far in the U.S., per the CDC: 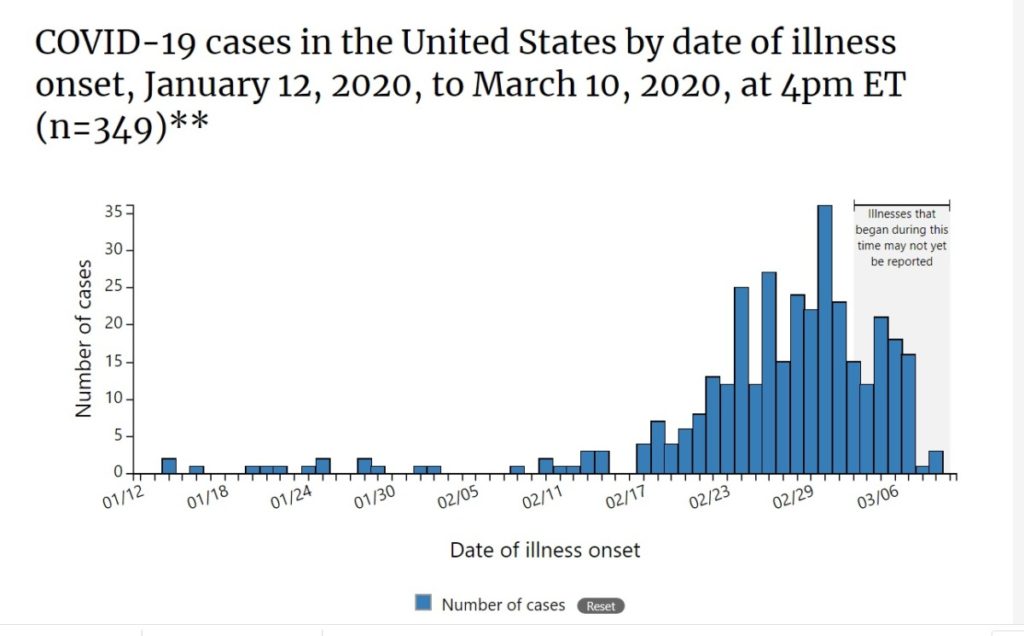 I am not here to question these numbers.

I am not here to engage in alarmism.

This is simply an examination of what the experts are on record estimating, what they are telling Congress and the media, and by extension the public.

NOTE: This post has been updated with additional information and projections.