A poll released this week by the Venezuelan firm Meganálisis found that, of those in the country who said they lived with someone diagnosed with Chinese coronavirus, only a little more than 12 percent said those diagnosed with coronavirus received a PCR test.

A PCR (polymerase chain reaction) test identifies the genetic material of the Chinese coronavirus, formally SARS-CoV-2, in the body of a person. It is considered the most accurate, widely available test to confirm a Chinese coronavirus infection.

“The sensitivity of rapid antigen tests is generally lower than RT-PCR. The first antigen tests [approved in America] demonstrate sensitivity ranging from 84.0 percent – 97.6 percent compared to RT-PCR,” the U.S. Centers for Disease Control (CDC) note. “Antigen levels in specimens collected beyond 5-7 days of the onset of symptoms may drop below the limit of detection of the test. This may result in a negative test result, while a more sensitive test, such as RT-PCR, may return a positive result.”

Also in use is a “rapid test,” considered less accurate than the PCR test, to identify coronavirus in individuals with symptoms to determine if they should quarantine. A slightly larger number of those who told Meganálisis a health professional had diagnosed someone in their home with coronavirus said they received only a less accurate rapid test.

The majority, nearly 70 percent, said they received no test at all when told they were suffering from Chinese coronavirus.

The results call into question Venezuela’s official coronavirus case numbers, compiled by the socialist dictatorship of Nicolás Maduro in a nation whose healthcare system is so deteriorated hospitals began asking patients to bring their own medicine in 2016. Maduro has vocally boasted that Venezuela’s case counts are significantly lower than its neighbors, particularly the free states of Colombia and Brazil.

Meganálisis’ latest poll, taken between October 7 and 17 of this year and including answers from 1,105 people in every state of the country, found that few considered the Maduro regime’s alleged coronavirus statistics accurate.

The poll asked, “Do you believe in and trust the official data on coronavirus in Venezuela, which the Nicolas Maduro government announces daily?” The most popular answer was “no,” which accounted for 72.56 percent of responses. Another 15.09 said they did not know; at 12.35 percent, “yes” was the least popular answer.

To those with coronavirus patients in their home, the pollsters asked how they came to know they had coronavirus. Most — 68.82 percent, said they received “medical diagnosis and common exams with no quick test or PCR.”

Nearly a fifth, 18.3 percent, said they received a “quick test,” while only 12.88 percent received either only a PCR test or the PCR test and a rapid test.

Nearly 90 percent — 86.96 percent — said they treated the disease on their own, without help from the state. 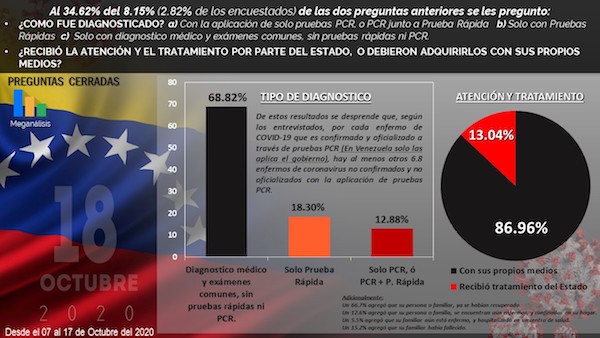 Meganálisis Venezuela — October 2020 poll to those who were diagnosed with coronavirus.

The poll also asked several perennial questions regarding the state of support in the country for Maduro, whose legal term as president ended nearly two years ago, and President Juan Guaidó, who formally took over in January 2019 but has failed to wield any presidential power. Asked of Guaidó’s intentions, 87.1 percent of those polls said they believed that the president had “intentionally deceived Venezuelans” about his ability to restore order in the country.

In response to the question, “With which of these options do you believe that the problems of Venezuela will begin to be resolved?” — presented with three choices — a vast majority (81.1 percent) chose “that there not be any more socialism and everybody leaves — Maduro, the chavistas, Guaidó, and the G4.” About twice the number of people, but only 10.6 percent, chose “let Maduro and the chavistas govern” compared to 5.1 percent for “let Guaidó and the G4 exercise a transition government.

Maduro claims, at press time, that Venezuela has documented 89,565 cases of Chinese coronavirus and 773 deaths. In contrast, neighboring Colombia — one of the nation’s hardest hit by the Venezuelan migrant crisis — has documented over 1 million coronavirus cases and 30,000 deaths.

The low numbers have generated global skepticism for months, particularly in light of the Maduro regime claiming it is doing more testing than any other country. Part of that skepticism comes from the fact that the Maduro regime has made it illegal for any private clinic, hospital, or other comparable institution, or any university or research institution, to administer PCR tests. At one point early on in the pandemic, only one site in Caracas had permission to process coronavirus tests for the entire nation.

“I wouldn’t do things the way they are doing it,” Dr. Angela Caliendo, a professor at Brown University, told the Associated Press of the Maduro regime’s approach to testing in April, stating that the regime “is using a lot of these cheap tests and gathering quite a bit of information.”

“Other countries are registering molecular tests [PCR tests] while in Venezuela we are summing up more rapid tests,” José Manuel Olivares, a member of Venezuela’s National Assembly, lamented that same month. “It is very probable that what the government is doing is biased from a diagnostic perspective.”

In May, largely in response to widespread criticism, the Maduro regime began to use its enforcement arms to intimidate scientists concerned about its methods into silence. Following a report questioning official numbers published by Venezuela’s Academy of Physical, Mathematical, and Natural Sciences, senior Maduro henchman Diosdado Cabello announced, “this needs to be investigated.” Cabello implied the scientists were lying and must face criminal action.

“It worries us as scientists, that we are harassed and marked for a technical report intended to improve management of the pandemic,” the Academy replied in a statement. “The report used a mathematical model that the London School of Hygiene and Tropical Medicine developed earlier this year.”