Pursuant to Biden’s expressed wishes, federal agencies have been exploring how many Americans they could order vaccinated without Congress’s inserting a vaccine mandate into one of its coronavirus-response laws. (Think trying to impose Obamacare’s individual mandate without Congress ever passing the Affordable Care Act.) The Supreme Court heard challenges to two of those mandates Friday.

First was the Occupational Safety and Health Administration (OSHA), a component of the U.S. Department of Labor, which issued a Emergency Temporary Standard (ETS) mandating employers with 100 or more employees to require their employees to get vaccinated. The employer must either fire any employee who refused or pay a crippling penalty, beginning January 10.

“The government is trying to work across the waterfront, and is just going agency by agency,” Chief Justice John Roberts – considered a swing vote in these legal challenges – observed. He said the administration’s actions amounted to a “workaround. I’m just trying to figure out what you are trying to work around.”

“It seems to me that the more and more mandates that pop up in different agencies, I wonder if it’s not fair for us at the court to look at a general exercise of power by the federal government,” Roberts continued, adding that the court should, “then ask, ‘Well, why doesn’t Congress have a say in this? And why isn’t it the primary responsibility of the states?’”

Justice Clarence Thomas seemed to reject the Biden Justice Department’s claim that 29 U.S.C. § 655(c) – the federal statute for OSHA to issue an ETS – could authorize a vaccine mandate.

“When OSHA itself has never mandated vaccines or even testing before … all of those are factors in the scope of what OSHA could do here,” Thomas explained.

Thomas went on to add that the Federal “Government could have had notice and comment,” referring to the normal legal process for agencies, including OSHA, to issue regulations, requiring months of public comment and participation, giving companies a chance to voice their concerns and forcing the agency to build a public record for legal review.

“Why isn’t this necessary to abate the grave risk?” asked Justice Elena Kagan, clearly supporting the mandate and citing the fact that over a million people have died from Covid.

Accomplished Supreme Court litigator Scott Keller, representing the National Federation of Independent Business (NFIB) in its challenge to the OSHA mandate, explained that federal law imposed both restrictions and strict conditions when an agency is “wielding what is a delicate and extraordinary power.”

When later responding to a series of hostile questions from Justice Sonia Sotomayor, Keller explained that even the federal government admits that up to 3 percent of employees will quit as a consequence of the ETS if it is not blocked, which would be over 2 million jobs. 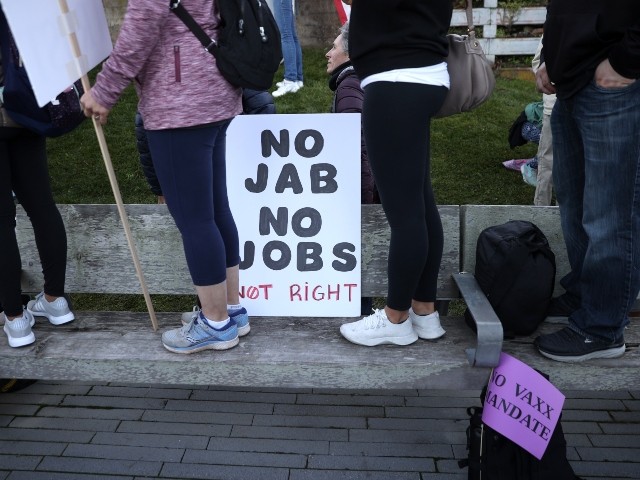 Protesters stand next to a sign during an anti-vaccination rally at the Golden Gate Bridge on November 11, 2021 in San Francisco, California. (Photo by Justin Sullivan/Getty Images)

“Congress and states and governors wielding emergency powers” might be able to impose such vaccine mandates, Keller conceded, but federal agencies cannot do so by executive fiat.

Justice Brett Kavanaugh focused his questions on the major questions doctrine, under which Congress must speak with clear authorizing language when it seeks to give an agency power to issue regulations of vast political and economic significance, if the Constitution permits Congress to do so at all.

“The difficulty in applying it is determining when something is major enough,” Kavanaugh explained. “What should we look at to say this one is the kind of rule … that we should consider major?”

Keller answered that the court should look at the “size and scope” of the regulation, noting that here it would dictate the fate of 1.8 million businesses and 84 million employees, easily qualifying as a matter of “vast political and economic significance.”

“Is this the agency that has expertise over communicable diseases?” Keller asked rhetorically, saying that too is a factor as to whether OSHA has this power. “No, it is not.”

Justice Neil Gorsuch made the point during argument that “it’s not that judges are supposed to decide questions of public health,” but that the court’s role in this challenge to OSHA’s mandate is to “make sure the proper party does.”

Ohio Solicitor General Benjamin Flowers also participated in oral arguments, representing 27 states – a majority of the nation – likewise challenging OSHA’s legal authority. He cited the constitutional doubt doctrine to say that Congress could not have conferred such staggering power to OSHA, explaining, “There are limits to how much authority Congress can give away.”

“Those numbers show that omicron is as deadly and causes as much serious disease in the unvaccinated as delta did,” Sotomayor said, sparking instant online criticism and earning a fact check from Breitbart. “We have over 100,000 children – which we’ve never had before – in serious condition and many on ventilators.” (The fact check revealed the number of children in hospital care is around 3,000, and that omicron appears much less severe than delta, observations confirmed by various other medical experts responding after arguments.)

After getting U.S. Solicitor General Elizabeth Prelogar to agree that the Biden administration would not object if the court needs to issue a multi-day administrative stay – effectively a temporary pause – to block the OSHA mandate to finish writing its decision in this case, Justice Samuel Alito raised several objections to the ETS.

“On the issue of whether you’re trying to squeeze an elephant into a mousehole … most OSHA regulations … affect employees when they are on the job, not when they are off the job,” Alito noted, using language associated with the major questions doctrine. “Isn’t this different from anything OSHA has ever done in that respect?”

After forcing Prelogar to agree that there is some degree of medical risk to some individuals from the vaccine, Alito pressed further, “Has OSHA ever imposed any other safety regulation that imposes some extra risk, some different risk on the employee?” 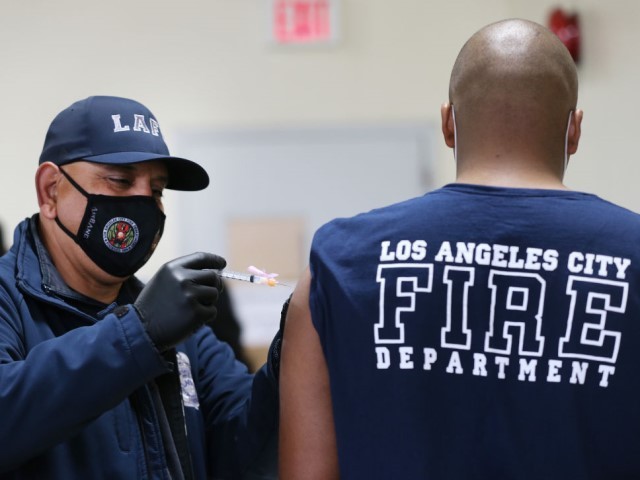 Alito balked when Prelogar tried to argue that employers could substitute a masking and testing regime as an alternative to vaccines, noting the well-known shortage of tests, asking, “Is the testing alternative viable at the present time?”

“Traditionally, states have had responsibility for vaccine mandates,” Gorsuch began as he voiced numerous concerns about OSHA doing this as an ETS rather than leave the matter to Congress. “Congress has had a year to enact a vaccine mandate already.”

“Traditionally, OSHA has had rules that apply to workplace hazards,” he mentioned as another objection, “not …. 24 hours a day,” which is what a vaccine would amount to.

“OSHA did not adopt this rule in response to an emergency, which has been going since 2020… Facts will continually change,” Justice Amy Coney Barrett said to Prelogar, exploring a separate series of objections. “When does the emergency end?… Two years from now, do we have any reason to believe that Covid will be gone? …When must OSHA actually resort to its regular authority, and go through notice and comment?”

The court also heard arguments to the vaccine mandate issued by the Centers for Medicare and Medicaid Services (CMS), the component of the U.S. Department of Health and Human Services (HHS) that funds those massive federal programs. That mandate requires 10.2 million healthcare workers to get vaccinated, or their employers would be ineligible to receive CMS dollars – which would bankrupt countless doctors and hospitals.

Currently, the CMS mandate has been blocked by various court orders in 25 states, but it is fully enforceable in the remaining 25 states.

“Do the states have clear notice” that by signing up for Medicaid, the federal government could impose a vaccine mandate on those states?” Alito pressed U.S. Deputy Solicitor General Brian Fletcher as the latter attempted to defend the CMS mandate. Alito questioned what provision in federal law said HHS is “authorized to protect the health and welfare” of people, asking, “Is there any limit to that power?”

“You are required by statute to consult with states,” Alito further noted, adding that it would be odd if federal law was written to authorize what happened here, whereby the federal government imposes a mandate on the states, then talks to the states only after the fact, and called such an exchange a “consultation.”

“The [HHS] Secretary shall not control the tenure of employees” at Medicaid providers, Justice Neil Gorsuch quoted from the federal law HHS claimed as its authority, asking Fletcher why the CMS mandate does not violate that restriction on HHS, given that employers would be required to fire employees who are unvaccinated. 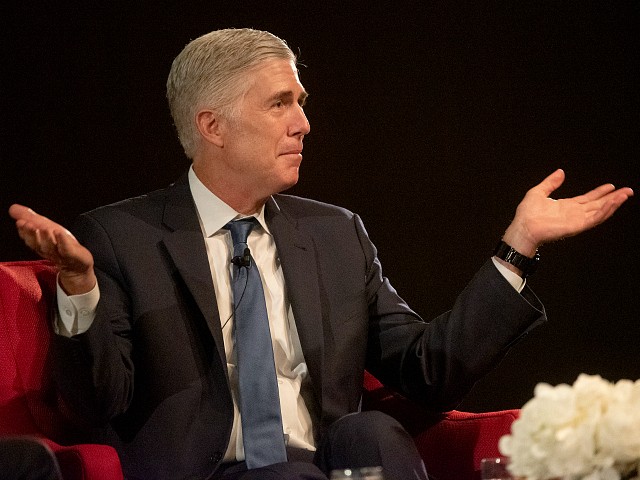 Gorsuch also said to Fletcher that the federal government “can’t use money to commandeer” the states into administering a federal program, pressing him to explain why this mandate does not cross that Tenth Amendment limit on federal power.

After tough questions on both sides, it was not clear whether the same majority of the justices who seemed to oppose the OSHA mandate were also united in their opposition to the CMS mandate.

Decisions usually come down months after argument. But in this extremely unusual instance of hearing arguments over stay applications, decisions should be expected within a couple weeks, if not days.

Given Prelogar’s concession to Alito, it is also possible that the court could grant an administrative stay before Monday to prevent the OSHA mandate from going into effect while the justices finish writing their decision.