Attorneys representing Serbian tennis star Novak Djokovic revealed during a hearing Friday that Australian Immigration Minister Alex Hawke chose to revoke Djokovic’s visa out of fear that his presence in the country would “excite anti-vax sentiment.”

Hawke announced on Friday afternoon – leaving minimal time for a judicial rebuttal – that he would exercise his personal power to expel Djokovic from the country after a judge ruled on Monday that he could remain. Djokovic attempted to travel to Melbourne last week to participate in the Australian Open, one of four tennis Grand Slam tournaments. Prior to his departure, the tennis player posted an update on social media claiming he had overcome Australia’s coronavirus vaccine requirement by receiving a medical exemption, but upon arriving, Border Force detained him and invalidated his visa. Djokovic spent the weekend in a migrant detention facility before a judge invalidated his detention Monday and ruled that he could stay in the country.

The Australian Open is scheduled to begin Monday:

I’m pleased and grateful that the Judge overturned my visa cancellation. Despite all that has happened,I want to stay and try to compete @AustralianOpen
I remain focused on that. I flew here to play at one of the most important events we have in front of the amazing fans. 👇 pic.twitter.com/iJVbMfQ037

Djokovic’s attorneys have moved to challenge the new deportation order, bringing the case back to the same judge. There, reporters on the scene relayed, defense attorney Nicholas Wood asserted that Hawke based his decision to deport Djokovic on the grounds that his presence in Australia after openly asserting that he had not consumed a Chinese coronavirus vaccine product would agitate “anti-vax” sentiments in the country.

“He has no rational basis to say the decision he makes is up to generate a greater amount of anti-vax sentiment that he is seeking to minimise,” Australia’s the Age quoted Wood as saying.

Australia’s ABC News quoted Wood also contending that the allegation that Djokovic’s personal opinions were a threat to the country was also “in stark contrast to the reasons that the [Australian Border Force] delegate at the airport was saying.” Djokovic’s initial detention was a result, according to the government, of the tennis champion presenting insufficient legal paperwork to prove a legitimate medical exemption from the vaccine requirement:

Nick Wood says that's not relevant because the Minister says he made his decision assuming that Djokovic ticked all the right boxes.

He says the minister took a "radically different" approach to the decision, basing it on the prospect Djokovic would "excite anti-vax sentiment".

In 2020, Djokovic made public statements declaring that he was “opposed to vaccination,” but he has not since repeated that opinion publicly. Instead, Djokovic has shifted towards calling vaccination a personal decision that governments do not have a right to force upon their citizens.

The official statement from Hawke did not mention any fears of what Djokovic’s presence in Australia could do to public opinion. Hawke simply stated that it “was in the public interest” for Djokovic not to be in Australia.

“This decision followed orders by the Federal Circuit and Family Court on 10 January 2022, quashing a prior cancellation decision on procedural fairness grounds. In making this decision,” Hawke stated, “I carefully considered information provided to me by the Department of Home Affairs, the Australian Border Force and Mr Djokovic.” He added, “The Morrison Government is firmly committed to protecting Australia’s borders, particularly in relation to the [Chinese coronavirus] pandemic.”

Prime Minister Scott Morrison, facing a difficult election this year, in part due to authoritarian coronavirus lockdown policies throughout his tenure, claimed in a statement Monday that the deportation order was made “on health and good order grounds.” 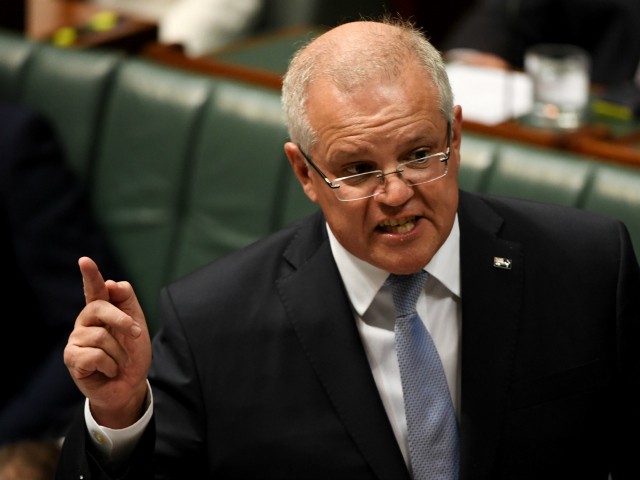 “Australians have made many sacrifices during this pandemic, and they rightly expect the result of those sacrifices to be protected,” Morrison asserted. “This is what the Minister is doing in taking this action today.”

Notably absent from the current proceedings are new developments that surfaced in the days after Djokovic won his right to stay in the country. Djokovic reportedly claimed to have tested positive for the Chinese coronavirus on December 16 but attended public events – including one with children – on the day he allegedly tested positive for the contagious disease. Reports also indicated that Djokovic had claimed in paperwork to the Australian government that he had not traveled to any third countries before his flight to Melbourne from Spain, but social media posts showed him in Belgrade, Serbia, in the interim.

The German magazine Der Spiegel added to the controversy by revealing that attempts to pull up Djokovic’s alleged positive test in the Serbian government’s online database reportedly pulled up a negative test and that the numbers for Djokovic’s positive and negative tests – the latter used to prove to Australian officials Djokovic was no longer contagious – were inconsistent, suggesting the positive test was filed into the Serbian database before the negative one was.

Djokovic addressed the situation following the reports, admitting to false assertions in the Australian documents but blaming his agents for filling out a form incorrectly. Djokovic claimed he did not yet know the results of his PCR test before meeting with the children on December 16 but that he did know he tested positive for coronavirus before meeting with a French journalist from the magazine L’Equipe. He did not apologize for doing so.

Australian officials allowed at least three other professional tennis players into the country under the same medical exemption Djokovic received but has since deported them in light of the current scandal.