The “caravan” of Honduran migrants seeking entry into the United States is an organized and direct political challenge to Americans’ borders and to President Donald Trump’s popular immigration policies.

The open-borders activists who organized and funded the bus-borne migration have now delivered a few hundred migrants up to the borders. This is a small number of migrants — just a tiny percentage of the more than half million who have traveled the same roads and gotten through the border since 2011.

The migrants want to show that Trump’s opposition cannot stop them from walking through the asylum law legal-loopholes in the border. Those loopholes can be opened by people who claim a “credible fear” of danger if they are sent back to their homeland — such as persecution by criminals of governments.

Trump’s Attorney General Jeff Sessions has warned the migrants that their claims for asylum are undermined by the decision to decline asylum in the legally safe country of Mexico. The U.S. immigration judges on the border can reject asylum claims by the Hondurans on the legal grounds that their rejection of Mexican asylum shows the migrants are actually economic migrants ineligible for asylum in the United States.

Normally, border judges must allow migrants to apply for asylum because of very lax thresholds set by Congress. Once allowed to apply, the migrants cannot be detained by the U.S. government for longer 20 days if they are carrying children. The 1997 Flores legal settlement set the 20-day limit, and it forces officials to release asylum-seekers into the United States, where another rule allows the migrants to get work-permits and join the blue-collar economy in Democratic-run cities.

The migrant caravan is an annual event organized by an open-borders group, titled Pueblos Sin Frontera, or Peoples WIthout Borders. Their march is named “Migrant Via Crucis,”  or “The Way of the Cross for Migrants.” This religious name is a political claim by the organizers that the migrants are victims of oppression, and that their cause is just.

Roughly 1,200 migrants began their trip on March 25, and crossed from Guatemala into Mexico at Tapachula, then headed 200 miles north to Matias Romero.

On April 4,  officials in the Mexican government provided them with temporary visas during a stopover at a sports stadium in Matia Romero. 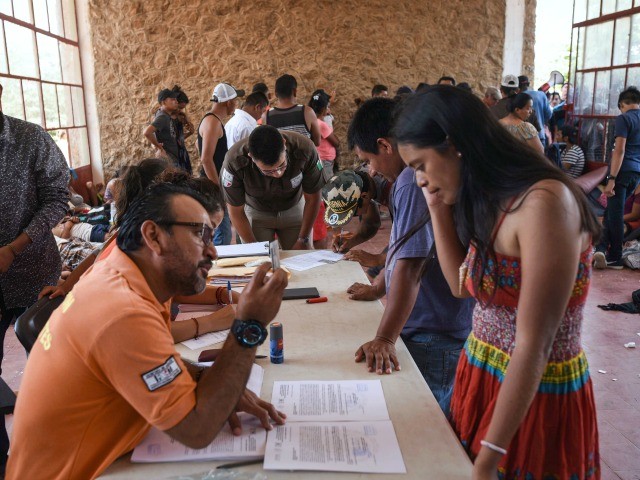 Central American migrants taking part on the ‘Migrant Via Crucis’ caravan towards the United States, obtain temporary permits from the Mexican Migration’s National Institute, as they camp at a sports complex in Matias Romero, Oaxaca State, Mexico, on April 4, 2018. 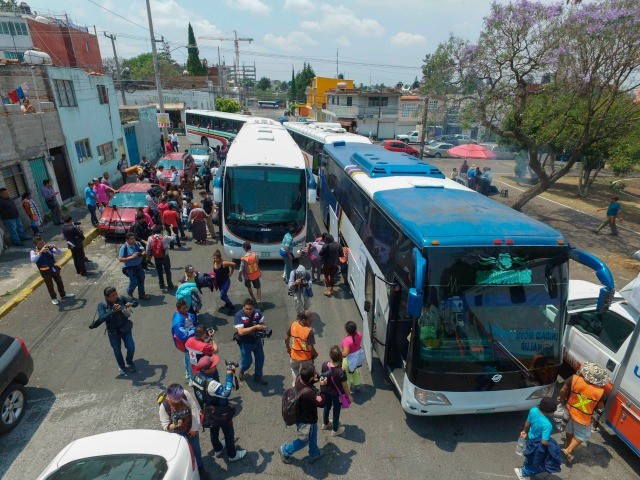 Central American migrants taking part in the ‘Migrant Via Crucis’ caravan towards the United States, arrive in Puebla, Puebla State, Mexico, on April 6, 2018 where they will attend a legal clinic with NGOs on human rights. The activists who organized the caravan have convened a legal clinic to help them seek asylum or visas, whether in Mexico or the U.S.

Back on the buses, and the migrants reached Mexico city on April 6. Organizers say they group included up to 1,500 people, but the images show only a few hundred or less. Subgroups of migrants reportedly joined and split from the caravan. For example, one group of a few hundred young men — whose have little chance of claiming asylum — split off from the main group to jump on a northwards-bound train. 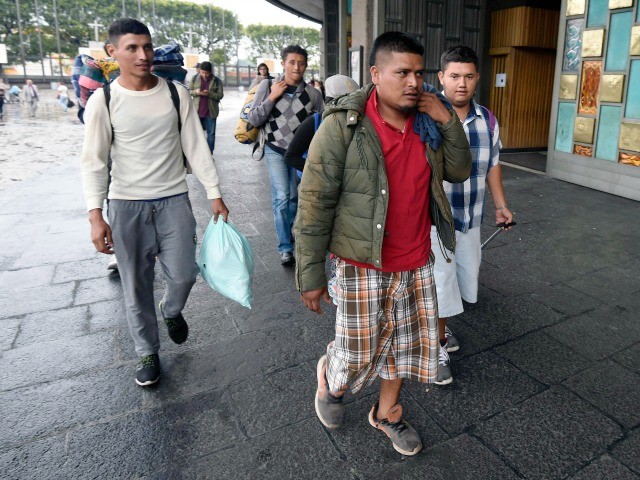 Central American migrants taking part in the ‘Migrant Via Crucis’ caravan towards the United States, arrive at the Basilica of Guadalupe in Mexico City on April 6, 2018.

Organizers also claimed at various times that they were halting the march. Those reports were amplified by reporters traveling with the caravan and by Mexican officials. On April 3, for example, local Mexican officials suggested they would stop the caravan.

Mexican immigration authorities said they plan on disbanding the Central American caravan by Wednesday in Oaxaca. The most vulnerable will get humanitarian visas.

On April 5, for example, Trump tweeted that Mexican officials planned to block the caravan — and grant asylum to some of the migrants.

Mexican immigration authorities said they plan on disbanding the Central American caravan by Wednesday in Oaxaca. The most vulnerable will get humanitarian visas.

The Mexican government promises were applauded by Trump on April 5.

The Caravan is largely broken up thanks to the strong immigration laws of Mexico and their willingness to use them so as not to cause a giant scene at our Border. Because of the Trump Administrations actions, Border crossings are at a still UNACCEPTABLE 46 year low. Stop drugs! 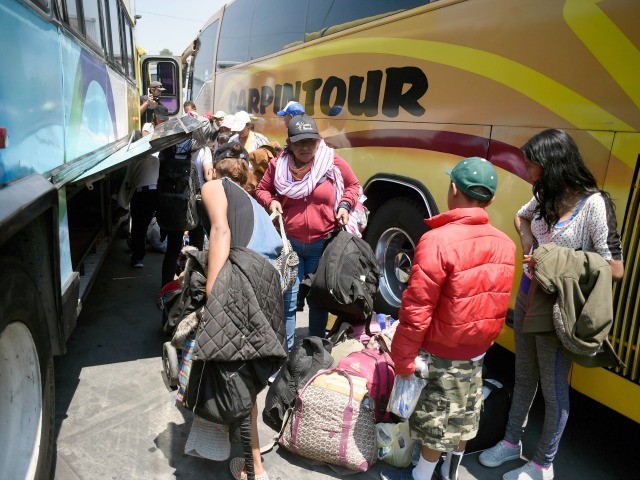 Central American migrants taking part in the ‘Migrant Via Crucis’ caravan which originally planned to reach the US border, arrive at the Casa del Peregrino shelter near the Guadalupe Basilica in Mexico City on April 9, 2018. 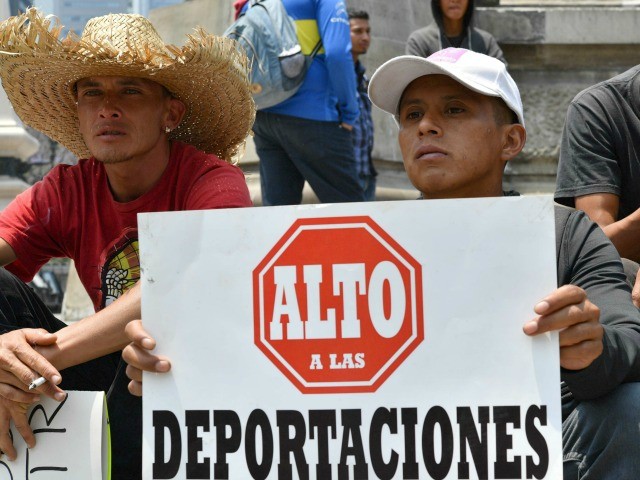 Central American migrants take part in the ‘Migrant Via Crucis’ caravan towards the United States and participate in a protest against the policies of US President Donald Trump in front of the US embassy building in Mexico City on April 7, 2018. 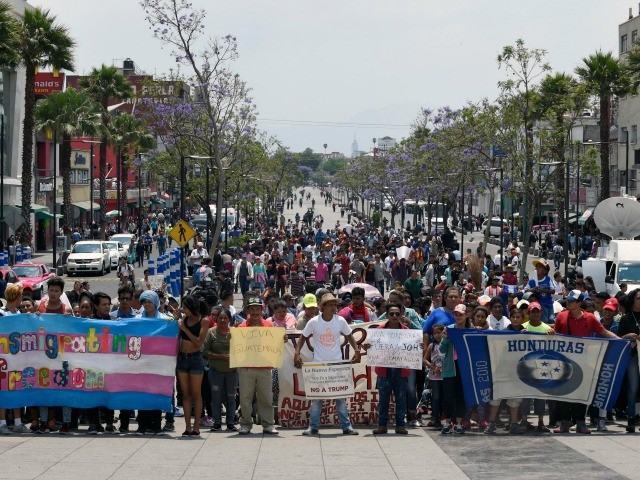 Central American migrants taking part in the ‘Migrant Via Crucis’ caravan which originally planned to reach the US border, are welcomed by other migrants as they arrive at the Casa del Peregrino shelter near the Guadalupe Basilica in Mexico City on April 9, 2018. 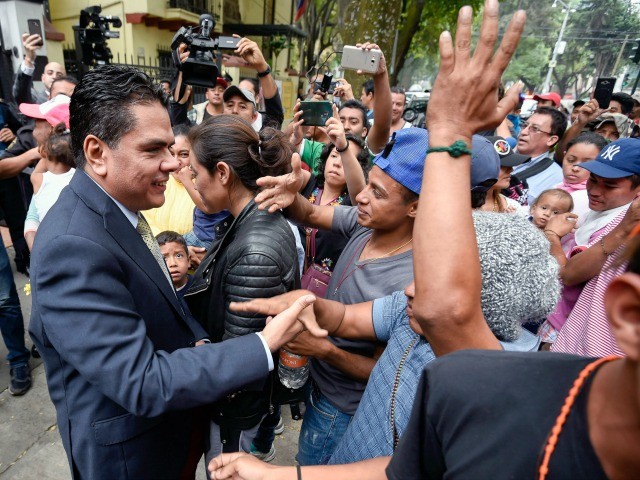 Honduran Ambassador Alden Rivera (L), speaks with compatriot migrants taking part in the ‘Migrant Via Crucis’ caravan, who are protesting outside Honduras Embassy in Mexico City on April 11, 2018.

Like yesterday the caravan sang the national anthem for Honduras but now they’re also doing El Salvador and here you can see them sing the Guatemalan national anthem. pic.twitter.com/gfO7iXENJP

The organizers describe their march as a human rights project, but surveys by a Jesuit-run research and social action center in Honduras show that the vast majority Hondurans view migration to the United States as an economic decision and that a declining percentage were fleeing crime and violence. According to the Center for Immigration Studies:

The report by the Reflection, Research, and Communication Team (ERIC-SJ as it is known in Spanish) is based on a survey of public perceptions of Honduras’ social, political, and economic situation in 2017. ERIC-SJ conducted the survey February 12-22, 2018, with a national sample of 1,584 valid questionnaires, which is representative of all persons over 18 who live in the country …

Of the respondents that had a family member who had emigrated in the last four years, 82.9 percent did so due to lack of employment and opportunities to generate an income. Meanwhile, 11.3 percent migrated due to violence and insecurity.

One woman said she is traveling to California to get medical aid.

Maria was diagnosed with breast cancer and needs surgery. She wants to have it done in the US where she’ll have the support of family but is concerned about being detained. She’s also considering staying in Mexico but doesn’t have any family here. pic.twitter.com/5PBKH7kmok

After the Mexico City protests, the caravan continued north after the protests, shuttling the migrants from each stop to the next. Some of the migrants used a train to more North.

At the moment the caravan is planning on getting to the train station and board the freight train on the outskirts of Mexico City. pic.twitter.com/YKP2NtPUQy

Mexican government agncies provided food and aid to the migrants.

Sure looks like Mexican govt support for illegal-alien caravan: Members rode atop freight train to Mazatlan station, where railway & immigration agency provided "food, water bottles & pots of coffee; after eating, they climbed back onto the train cars." https://t.co/H0Ag9xJTYJ

On April 17, some of the female and child migrants were sheltered at the Juventud 2000 shelter in Tijuana. 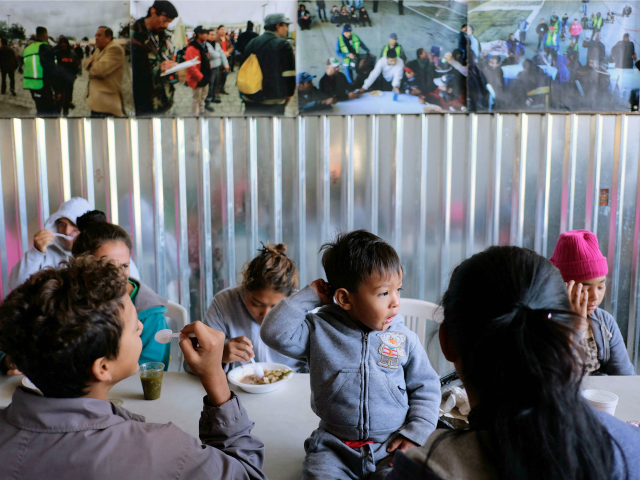 Christian (C) sits next to his mother (R) and other Central American migrants during the ‘Migrant Via Crucis’ caravan, as they have breakfast at Juventud 2000 shelter in Tijuana, Mexico on April 17, 2018. –

With the caravan not blocked by Mexico, Trump’s tone changed.

Despite the Democrat inspired laws on Sanctuary Cities and the Border being so bad and one sided, I have instructed the Secretary of Homeland Security not to let these large Caravans of people into our Country. It is a disgrace. We are the only Country in the World so naive! WALL

Mexico, whose laws on immigration are very tough, must stop people from going through Mexico and into the U.S. We may make this a condition of the new NAFTA Agreement. Our Country cannot accept what is happening! Also, we must get Wall funding fast.

By April 24, much of the caravan had split off into separate groups, leaving about 600 migrants with main organizers. The activists also said they plan to help roughly 200 migrants request asylum because of claimed violence or repression in their home country. 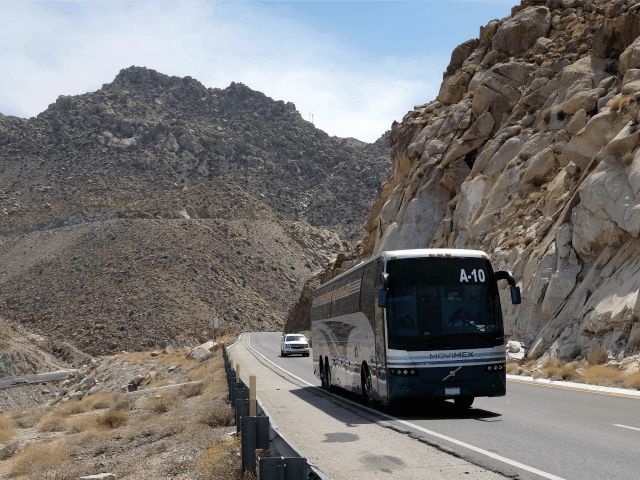 On April 24, Attorney General Jeff Sessions issued a warning to the migrants — and showed that he intends to bar the migrants from seeking asylum on the ground that they already declined asylum in Mexico.

Pockets of the original, so-called ‘migrant caravan,’ which press reports indicate consists mostly of Honduran nationals, have begun to arrive at our southern border with the intent of claiming asylum. These individuals—and their smugglers—ignored the willingness of the Mexican government to allow them to stay in Mexico.

“Let today’s message be clear: our nation has the most generous immigration system in the world, but this is a deliberate attempt to undermine our laws and overwhelm our system. There is no right to demand entry without justification. Smugglers and traffickers and those who lie or commit fraud will be prosecuted to the fullest extent of the law.

“Promoting and enforcing the rule of law is essential to protecting a nation, its borders, and its citizens. But, as President Trump has warned, the need to fix these loopholes and weaknesses in our immigration system is critical and overdue.

“Accordingly, I have directed our U.S. Attorneys at the border to take whatever immediate action to ensure that we have sufficient prosecutors available. I have also directed that we commit any additional necessary immigration judges to adjudicate any cases that may arise from this ‘caravan

AG Sessions points out that Honduran 'caravan' migrants are refusing to seek asylum in Mexico. I assume Session's independent asylum-judges will note what federal asylum regs say about applicants who refuse asylum in a safe country on their journey. https://t.co/idfH25ueWO