Earlier on Sunday, Mr. Soylu sent out a tweet declaring that Turkey had opened its doors and was no longer detaining migrants who wish to travel into Europe.

“We have opened the doors. Refugees are free to stay in Turkey or leave,” he said.

As Breitbart News reported last week, the Turkish government warned it would open its border with Syria for 72 hours and then allow migrants to go to Europe by land or sea unhindered.

Turkey’s threats to open its borders have been seen in Greece as an attempt to pressure European countries into paying more money to Turkey, which believes it is single-handedly facing the brunt of mass migration proceeding from conflicts in the Middle East.

Under a 2016 deal, Turkey agreed to hold back the tide of refugees to Europe in return for financial aid but Turkish President Recep Tayyip Erdogan has since protested that the EU has failed to honor its side of the bargain. 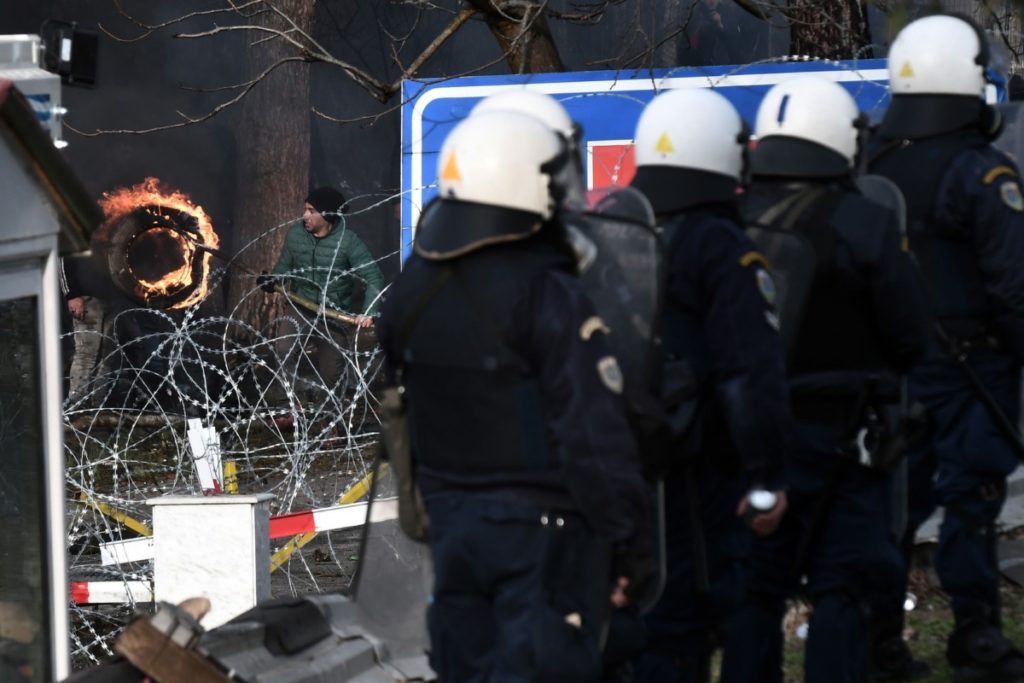 A migrant burns a tire as Greek riot police watch along the Greece-Turkey border in the village of Kastanies. Thousands more migrants reached the Turkish border with Greece on March 1, 2020, AFP journalists said, after the Turkish President threatened to let them cross into Europe. The groups include Afghans, Syrians and Iraqis. (Photo by Sakis MITROLIDIS / AFP) (Photo by SAKIS MITROLIDIS/AFP via Getty Images)

“We will not close the gates to refugees,” Erdogan said in a speech Saturday. “The European Union has to keep its promises.”

In 2019, Erdogan made several threats to “open the gates” of migrants into Europe, demanding financial aid from European countries to build a “security zone” along the border.

“Give us logistical support, and we can build houses up to 30 kilometres into the north of Syria,” Erdogan said last September. “Either that happens, or we open the gates.”

At that time, European Union spokeswoman Natasha Bertaud stated that the EU had already paid Turkey 5.6 billion euros as part of the EU-Turkey migrant pact.

Despite Mr. Soylu’s claim that over 100,000 migrants had already passed into Greece, that number has not been confirmed by the Greek government. Greek security personnel have reportedly been turning away large numbers of refugees trying to cross over from Turkey.

It is estimated that as many as 3.6 million Syrian asylum seekers are currently in Turkey.