Science managers are displaying their imported lab workers, even though many American science graduates cannot get jobs in their profession.

The display was slammed on June 25 by venture capitalist Eric Weinstein, a noted critic of the cheap-labor hiring policies of U.S. science managers.

This is not at all how labor markets work. But it‘s very emotional.

Notice that if I replace the word “Lab” with the word “Plantation”, “immigrant” with “African guest worker” and “science” with “cotton” you’d be drooling for that creepy antebellum south if you think like this. https://t.co/QvVuNmNEWX

“Of the entire [American technology] workforce, only about a third of those with STEM [science, technology, engineering, or math] degrees are employed in STEM jobs,” according to testimony provided by Hal Salzman, a workforce professor, to a Senate committee on February 25, 2020. He told the Senate’s judiciary committee:

The glut of scientists at the Ph.D. level is so great in areas such as the life sciences, the National Institutes of Health, the global leader in public funding for health science and research, has an $11 million program in universities to develop alternative careers for the nation’s recent doctorates and post-doctoral Fellows. That is, the NIH is funding efforts to find alternative employment for the 30 to 50 percent of recent Ph.D.s who cannot find career employment in the sciences. 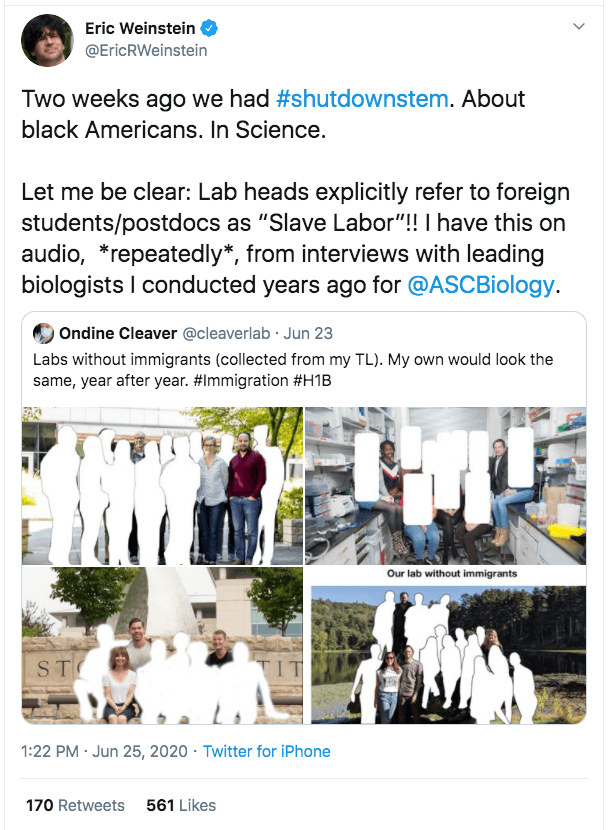 Many of the jobs sought by Americans are filled up by visa workers who have no workplace rights, who cannot complain or change jobs, and who will work for low wages in the hope of getting green cards. These visa workers are delivered by pipelines — including the H-1B, OPT, CPT, J-1, and O-1 programs — which allow U.S. employers to ignore U.S. graduates.

This displacement policy is backed by many top investors and CEOs — and is largely ignored by the establishment’s media.

“The science establishment fights to make sure that it doesn’t have to take extraordinary measures to bring blacks, women, other minorities into science by using our immigration system,” said a June 11 video by Weinstein, a Harvard-trained scientist who is also the managing director at Thiel Capital.

“Cancelling the evil H1-B program would/will cause a tremendous amount of short term damage to the U.S. and will be painful for many wonderful highly skilled workers and is also long overdue,” he said via a June 22 tweet.

The science estb. claims to support blacks, but uses #H1B pipelines to import Asians for STEM jobs that could go to blacks, says Harvard scientist Eric Weinstein.
It "is an entire sham."@EricRWeinstein Hmm. Do the visa pipes enable racist HR policies?https://t.co/u1GrxHW4ae

In a June 10 broadcast on YouTube, he argued that the radicals will use the one-day June 10 concession to demand more damaging concessions from science, he said, adding: