President Joe Biden has suggested that up to 65,000 Afghans must be resettled outside of Afghanistan as it remains unclear how many will ultimately arrive in the United States.

Earlier this week, Pentagon officials said up to 22,000 Afghans — those applying for Special Immigrant Visas (SIVs) and the newly-created P-2 visa — would arrive at Fort Lee in Virginia, Fort Bliss in Texas, and Fort McCoy in Wisconsin.

On Thursday, though, Biden suggested the U.S. must evacuate 65,000 Afghans from Afghanistan without specifying the U.S. or third countries like Qatar and Turkey, as their final destination.

The exchange with ABC News’ George Stephanopoulos went as follows:

STEPHANOPOULOS: How about our Afghan allies? We have about 80,000 people—

BIDEN: Well, that’s not the s—

STEPHANOPOULOS: Is that too high?

BIDEN: The estimate we’re giving is somewhere between 50,000 and 65,000 folks total, counting their families.

STEPHANOPOULOS: Does the commitment hold for them as well?

BIDEN: The commitment holds to get everyone out that, in fact, we can get out and everyone that should come out. And that’s the objective. That’s what we’re doing now, that’s the path we’re on. And I think we’ll get there.

On Friday, during a press conference at the White House, Biden again suggested his administration is “making the same commitment” to evacuate thousands of Afghans and resettle them outside of Afghanistan. 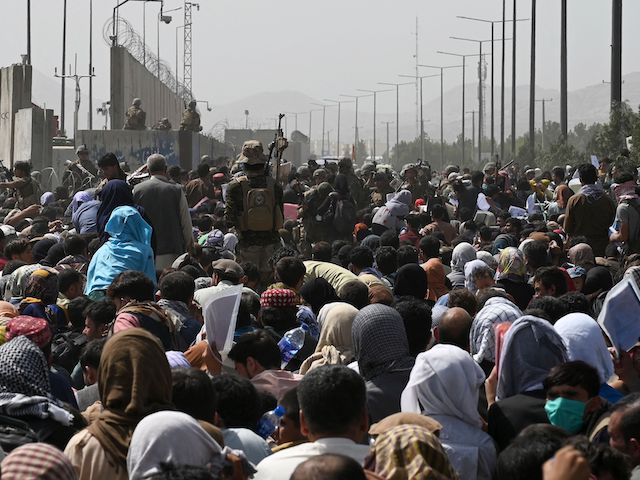 Biden said he believes his administration can finalize evacuations of Americans and Afghans by August 31 but then veered from the commitment, saying “we’re going to make that judgement as we go.”

The Associated Press reports that Biden has waived negative coronavirus testing requirements for Afghans being evacuated from Afghanistan.

Already, ten Republican governors have joined Democrat governors in their requests for the Biden administration to resettle Afghans in their states. States, counties, and local communities no longer have veto power over refugee resettlement after Biden canceled former President Trump’s executive order that granted such powers.