Ten Republican governors thus far have asked President Joe Biden’s administration to resettle Afghans in their states as the State Department plans to bring thousands to the United States for permanent resettlement.

As U.S. Special Forces withdraw from Afghanistan, the Biden administration has vowed to bring to the U.S. at least 22,000 Afghans via the refugee resettlement program. On Thursday, though, refugee contractors stated the number of Afghans looking to resettle in the U.S. is between 100,000 to 300,000.

Most of the Afghans include those who are being fast-tracked for Special Immigrant Visas (SIVs) — reserved for interpreters and their family members who worked with the American military during the Afghanistan war. 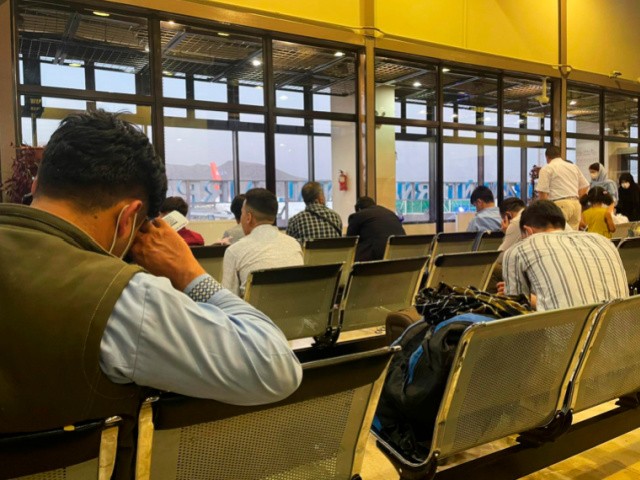 Passengers trying to fly out of Kabul International Airport amid the Taliban offensive wait in the terminal in Kabul, Afghanistan, Friday, Aug. 13, 2021. As a Taliban offensive squeezes in on the gates of the Afghan capital, there’s increasingly only one way out for those fleeing the war and one way in for the U.S. troops tasked with backing the American diplomats still on the ground: Kabul’s international airport. (AP Photo/Tameem Akghar)

In addition, Biden’s State Department has created the P-2 visa for Afghans who are not eligible for SIVs but who say they worked for military contractors and organizations in coordination with the American military.

Without a clear total bound for resettlement and a detailed vetting process, ten Republican governors have asked the Biden administration to resettle Afghans in their states.

Thus far, they include:

“We are eager to continue that practice and assist with the resettlement of individuals and families fleeing Afghanistan, especially those who valiantly helped U.S. troops, diplomats, journalists, and other civilians over the past 20 years,” Cox said in a statement.

Kemp suggested in a statement that he is open to resettling Afghans in Georgia, stating, “it is vitally important to keep those who partnered with American armed forces over the last 20 years safe from harm.”

Hogan, in a statement, said more refugee resettlement in Maryland “is the least we can do” to help Afghans, while Baker said in a statement that Massachusetts is looking to resettle refugees “seeking safety and peace in America.”

Massachusetts is ready to assist Afghan refugees seeking safety and peace in America.

On Thursday, Hutchinson said during a press conference Arkansas “would welcome” Afghans “as part of the other states that are welcoming those that need a place of refuge.”

(2/2) Today I announced my support for receiving Afghan refugees into Arkansas who have supported our men & women in uniform for nearly 20 years. We have a responsibility to these heroes & their families & we want to do our part to help America remain that shining city on a hill.

Reynolds, joined by Sen. Joni Ernst (R-IA), told local media that she would “work with [the Iowa Bureau of Refugee Services] to … make sure we have a process in place and we have families and homes for them to go.”

“We want to be a partner. We want them here, and we want them to know that. And we’ll work through those processes whatever they may be, but definitely we can handle that,” Reynolds said.

Ducey, with Arizona’s Speaker of the House Rusty Bowers (R), cited Bible verses in a statement that urged Biden to resettle Afghans in Arizona:

In Ephesians 2:19 the Bible states, “So then you are no longer strangers and sojourners, but you are fellow citizens with the holy ones and members of the household of God.”

When they have been cleared for entry into the United States for their service to our military, we are ready to welcome them and help them settle into their new home in the land of the free.

As Breitbart News reported, states, counties, and local communities no longer have veto power over refugee resettlement. Former President Trump had signed an executive order in 2019 granting states and local jurisdictions the power to refuse refugees, but Biden, in February, rescinded the order.

Over the last 20 years, nearly a million refugees have been resettled in the nation — more than double the residents living in Miami, Florida, and it would be the equivalent of annually adding the population of Pensacola, Florida.