Cuban former political prisoners and human rights activists held a vigil Friday in front of the United Nations offices of the communist regime to honor Armando Sosa Fortuny, who died this week after serving 43 years as a prisoner of conscience.

Sosa Fortuny escaped the Castro regime as an 18-year-old and joined an exile mission to overthrow the Castro regime in 1960, for which he was arrested and sentenced to 18 years of prison on the island. He served his time and escaped to America again, living in the United States until he joined a second mission to liberate Cuba in 1994. This time, he was sentenced to 30 years in prison and died there on Monday.

The few relatives who visited the 76-year-old regularly said the Castro regime offered him no medical care and he was in an advanced state of illness. Petitions for house arrest based on his poor health fell on deaf ears.

Cuba is a member of the United Nations Human Rights Council.

On Friday, members of the Cuban exile community assembled in front of Cuba’s U.N. offices to honor Fortuny, placing a wreath with his photo on the front doors of the building, chanting his name, and waving the Cuban and American flags. The group also waved a third flag – the “lone star” flag Cubans waved in their first rebellion against Spain in 1868, known as the Céspedes flag or October 10 flag. 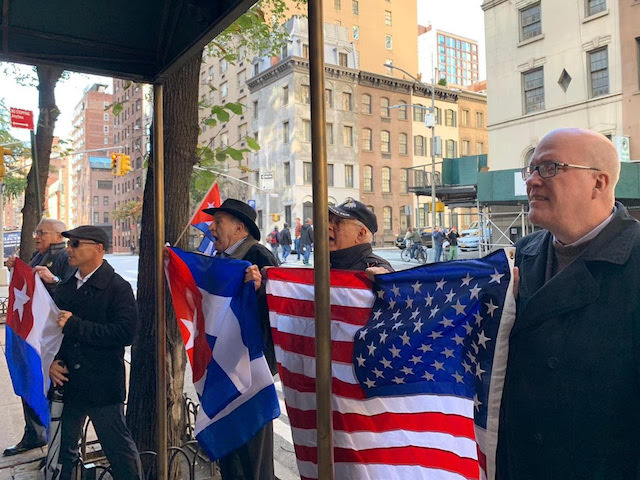 Cuban and American human rights activists hold a vigil for Armando Sosa Fortuny, who died in a Cuban prison after serving 43 years in political prison, in front of the Cuban U.N. offices on November 1, 2019. (Courtesy Assembly of the Cuban Resistance)

“He was a man who stood and died for the freedom of all. He was part of something bigger than himself, something bigger than all of us,” Gus Hernandez, a U.S. military veteran, said on Friday. “As a former Marine, as an American, and as a Cuban legacy, I salute this man and he cannot be forgotten.”

Orlando Gutiérrez-Boronat, national secretary of the Assembly of the Cuban Resistance, said the activists had united in front of the Cuban government’s offices to “denounce [Sosa Fortuny’s] death, to honor his memory, and to call on the Cuban people to heed his example and to continue the struggle against this tyranny.”

Gutiérrez-Boronat added that the Cuban exile coalition would like to see “the U.S. government increase sanctions against the Castro regime, and … isolate Cuba through our air and naval blockade so as to accelerate change in Cuba.”

President Donald Trump has extended policies meant to support human rights in Cuba, including ending lucrative tourism via cruise ship to Cuba, which enriched the brutal Castro regime, limiting the exceptions that allow Americans to travel to Cuba, and allowing Americans to sue the Castro regime for property it stole during early days of the Cuban Revolution.

Joining the mostly Cuban group of protesters was Dragos Donalescu Valenciano, a member of Costa Rica’s Legislative Assembly who serves as a legal adviser to the Justice Cuba commission. Justice Cuba is an international coalition of human rights attorneys and other advocates seeking to organize a Nuremberg-style trial for the Castro regime’s crimes against humanity. The group has completed its discovery phase of organizing a trial and is now seeking a venue to charge dictator Raúl Castro and his many living cronies with crimes against humanity. As a jus cogens principle, any court in the world can try those suspected of crimes against humanity and efforts are underway in Costa Rica and Chile to hold the communist leaders of the Cuban Revolution accountable for the murder, torture, extended imprisonment, and repression of thousands of Cuban people.

As an elected lawmaker, Dolanescu Valenciano attempted to approach Cuba’s United Nations offices to deliver a letter on the part of the Justice Cuba commission demanding answers regarding many of the unknowns of Sosa Fortuny’s captivity. 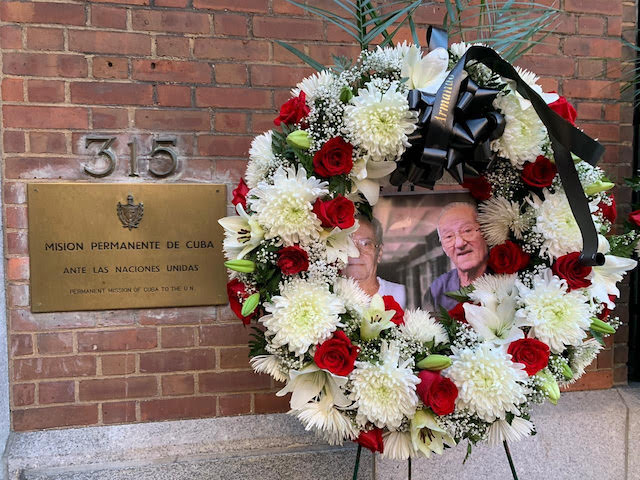 Cuban and American human rights activists hold a vigil for Armando Sosa Fortuny, who died in Cuban prison after serving 43 years in political prison, in front of the Cuban U.N. offices on November 1, 2019. (Courtesy Assembly of the Cuban Resistance)

Sosa Fortuny is believed to have spent more years behind bars than any other political prisoner in Cuban history.

“From the beginning, I was impressed by his enthusiasm, his faith, his courage, his stance against all trials,” Jorge Luis García Pérez, a former political prisoner known as “Antúnez” who spent 17 years in prison, some with Sosa Fortuny, said shortly after his death.

In a 2016 interview, Sosa Fortuny expressed continued hope that he would one day experience freedom again.

“I hope the pope, the United States, the European Union, will do something so we can get out of this hell,” he said in an interview with Hispano Post. “Nobody has really cared about us prisoners … I’m just waiting to see if they think about freeing this old guy at some point.”

Cuba regularly denies the existence of political prisoners under the Castro regime.

During a 2016 press conference with then-President Barack Obama, Raúl Castro famously replied, “What political prisoners?” when asked about their status by CNN journalist Jim Acosta. Multiple NGOs and human rights groups responded with lists of known political prisoners on the island, which the Castro regime ignored.

The Justice Cuba commission believes the communist regime has imprisoned at least half a million people for disagreeing with the government since it took power in 1959.