Guaidó is legally the president of the country, sworn in as an interim president as the nation’s constitution requires following the end of dictator Nicolás Maduro’s last term in January. Initially enjoying vast nationwide support, Venezuelans soured on Guaidó when he announced he had expelled Maduro from the presidential palace and taken hold of the military in May, only to have those plans thwarted and instead announce a “dialogue” with the Maduro regime. The “dialogue” – as it has since the first attempt at talks in 2013 – failed completely and helped Maduro cement his stranglehold on power.

Despite fostering disillusion with multiple rounds of talks, Guaidó succeeded in attracting people to his protest on Saturday.

“I will assume my responsibility and ask you to assume your role in this fight because here there are no magic dates or quick departures,” he said in a video promoting the march on Friday. “This will require more effort and greater sacrifice.”

Hundreds of Venezuelans, many under the age of 18, have been killed by Bolivarian National Guard units since Maduro took power after the death of dictator Hugo Chávez in 2013. The complete death toll of Venezuelan socialism, including state-enabled crime and killings during Chávez’s tenure, is over 330,000 people.

The 750,000 who marched with Guaidó on Saturday, according to the National Communication Center, protested their killings, some at the hands of official government agents, others killed by colectivos, extralegal socialist death squads Maduro uses to terrorize civilians. They held up signs reading “Maduro murderer,” and others protested the lack of basic goods and utilities like food, water, and electricity. 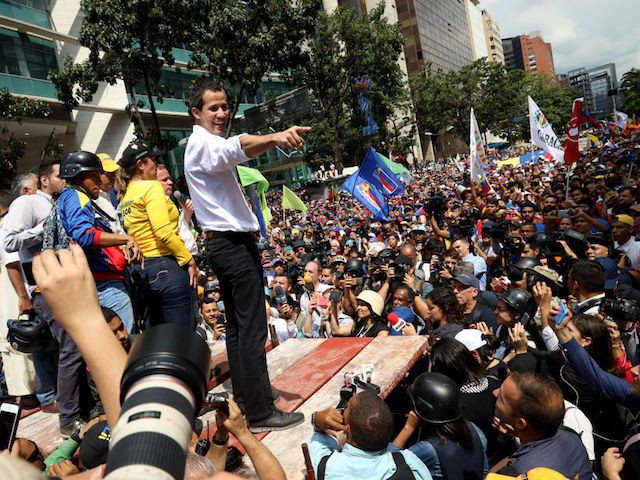 President Juan Guaidó speaks to supporters during a rally called “Wake up, Venezuela” to boost pressure on President Nicolas Maduro to resign on November 16, 2019, in Caracas, Venezuela. (Edilzon Gamez/Getty Images) 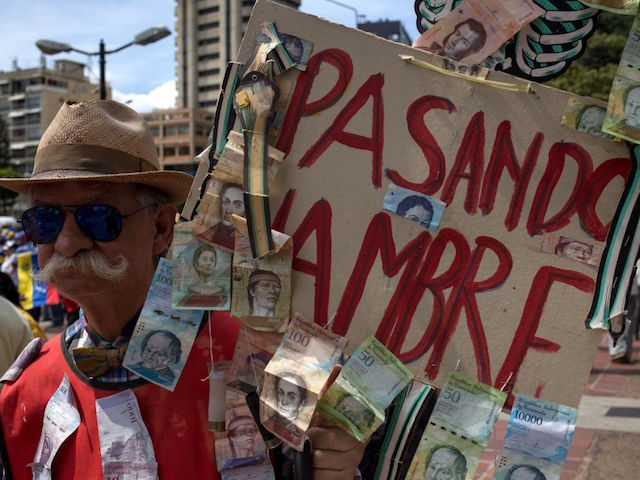 A supporter of President Juan Guaido holds a sign reading “Starving” during a gathering in front of the Bolivian embassy in Caracas on November 16, 2019. (CRISTIAN HERNANDEZ/AFP via Getty Images) 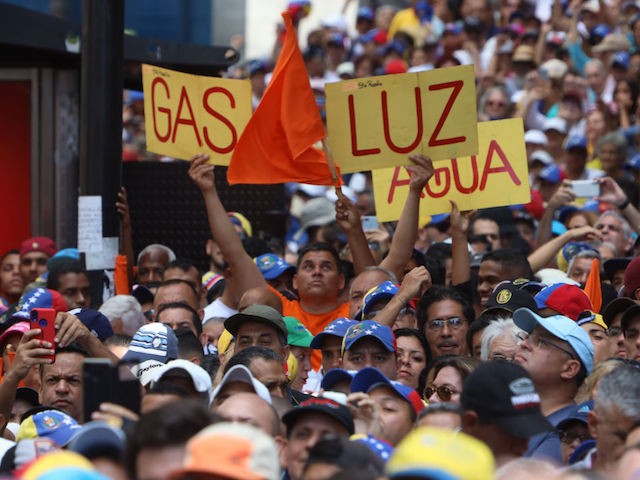 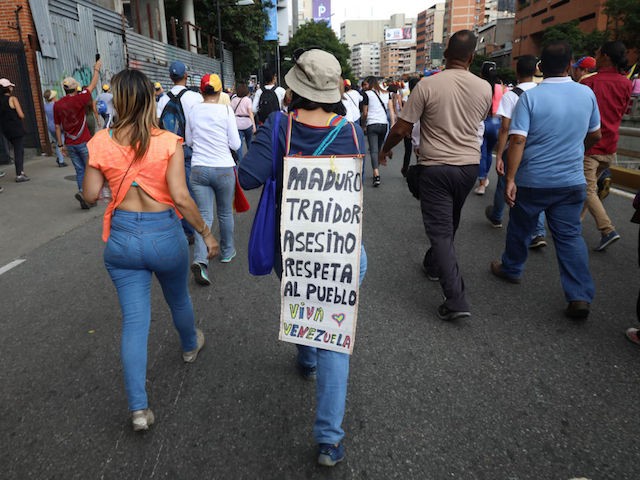 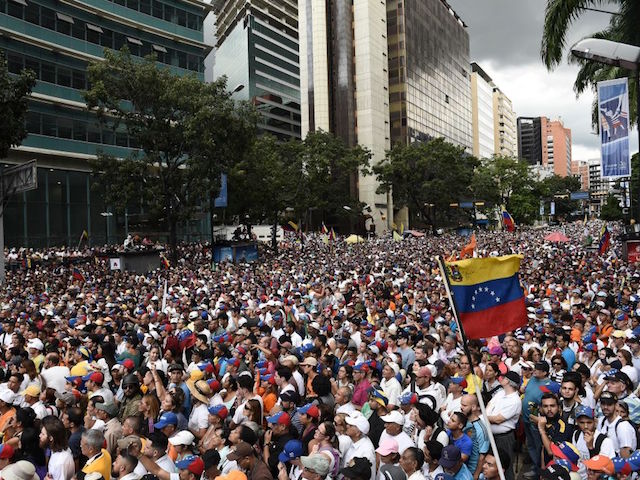 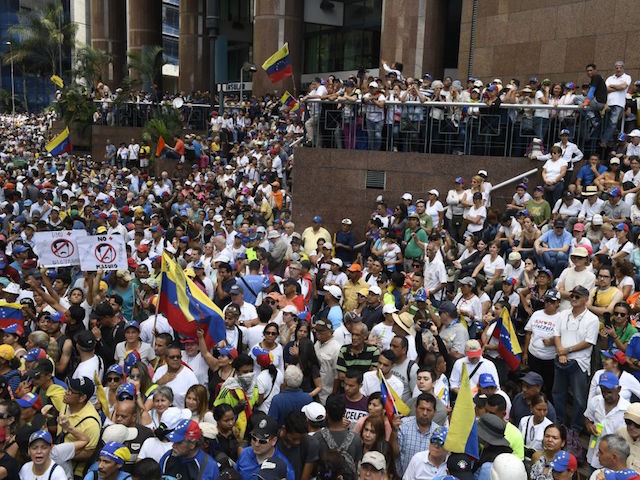 Supporters of Venezuelan President Juan Guaidó listen to his speech during a gathering in Caracas on November 16, 2019. (FEDERICO PARRA/AFP via Getty Images) 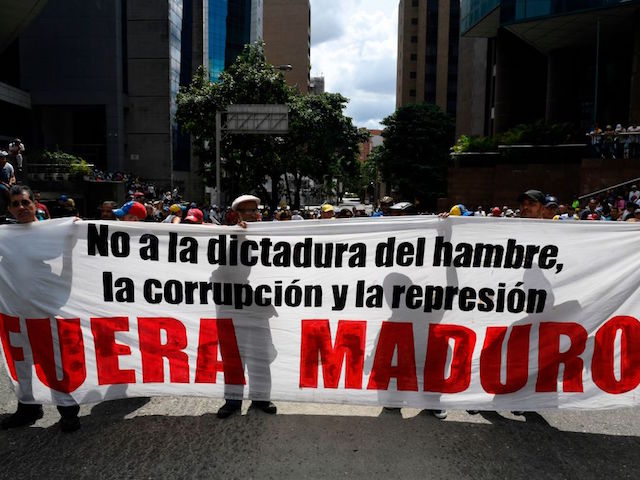 Pro-democracy protesters hold a banner that reads, “No to the dictatorship of hunger, corruption, and repression – MADURO OUT.” (FEDERICO PARRA/AFP via Getty Images)

Protesters reportedly convened in 141 places in Venezuela and another 35 locations around the world, including New York, Miami, and Washington, DC.

The Venezuelan newspaper El Nacional notes that, unlike prior protests, Maduro did not send out troops to torture and detain protesters, instead opting for a nationwide internet shutdown on sharing protest images.

Following the protest, Guaidó announced what he hoped was a ceaseless protest campaign until Maduro stepped down.

“For it to be sustained, for it to be permanent, to achieve our objectives, we have to stay in the streets,” he told reporters. “We have to continue exercising our rights.”

Guaidó teased that “what’s important is what is coming” after Saturday’s display, announcing general strikes by nurses on Monday and doctors on Tuesday to “break with the false normalcy” of life in the country.

“As of yesterday, the struggle of all is one,” he wrote on Twitter. “That the dictator leave so that we can have truly free presidential elections; which can only occur with citizens’ pressure, advancing together on an agenda of sustained, organized, and permanent street protest.”

“Whoever is dreaming with the shameful idea that what happened in Bolivia can happen here, we will not give them that chance,” Cabello said at the rally, referring to the resignation of socialist President Evo Morales this month after the Organization of American States (OAS) published evidence that Morales had committed fraud in the October 20 presidential election to stay in power.

“The right is a danger to itself. You’ll see yourself among self-proclaimed [presidents],” Cabello said, addressing Guaidó. “They are a plague trying to impose the United States on countries that have no affection for it.”

Guaidó’s strategy appears to be to shame Maduro out of office, as he has not requested international military aid to remove the dictator. The Venezuelan military – many members of which are believed to be involved in state institutionalized narcotics trafficking – have refused to support Guaidó despite his legitimacy as president.

Guaidó also denied the existence of any talks with the Maduro regime, stating that conversations with Maduro “have been dead for three months, they killed them, they ran off.” Maduro claimed he was still talking to Guaidó.

“You can’t deny it, we are sitting down still, my friend,” Maduro said on national television Sunday. “You can say a thousand things, whatever, you are a fascist, I’ll say it in public and I’ll say it in private.”

Maduro went on to call Guaidó, who he insisted his negotiators were talking to, a “dummy,” “imperialist puppet,” and “paid agent” of the United States.

Maduro’s regime has repeatedly insisted that Guaidó is a CIA or other American agent. In September, at the United Nations General Assembly, Maduro’s Vice President Delcy Rodríguez told the audience that Guaidó “does not exist” and is “a criminal element who has been introduced to breach the peace in the Bolivarian Republic of Venezuela.”

Guaidó spent much of the summer following his failed attempt to gain control of the military sending diplomats to countries like Norway and Sweden for mediated talks with the Maduro regime, which allowed Maduro time to regroup from his weakened standing following the protests that led to the National Assembly inaugurating Guaidó in January.