Cuban President Miguel Díaz-Canel, the face of the Castro communist regime, announced an “order of combat” on Sunday against peaceful pro-democracy protesters, urging communist civilians to assault them.

Thousands of Cubans nationwide, in at least 20 municipalities including Havana and Santiago de Cuba, flooded the streets of the country on Sunday in peaceful protests demanding an end to the 62-year-old communist regime. With chants of “freedom!” and some wearing or waving American flags, the protesters attracted outsized police violence.

Videos taken by civilians and posted to social media show protesters facing live gunshots, receiving gang beatings at the hands of state security officers, and fleeing from tear gas and rubber bullets. In remarks on national television, Díaz-Canel encouraged violence against the protesters not just on the part of the police, but on the part of Cuban civilians who sympathize with the regime. 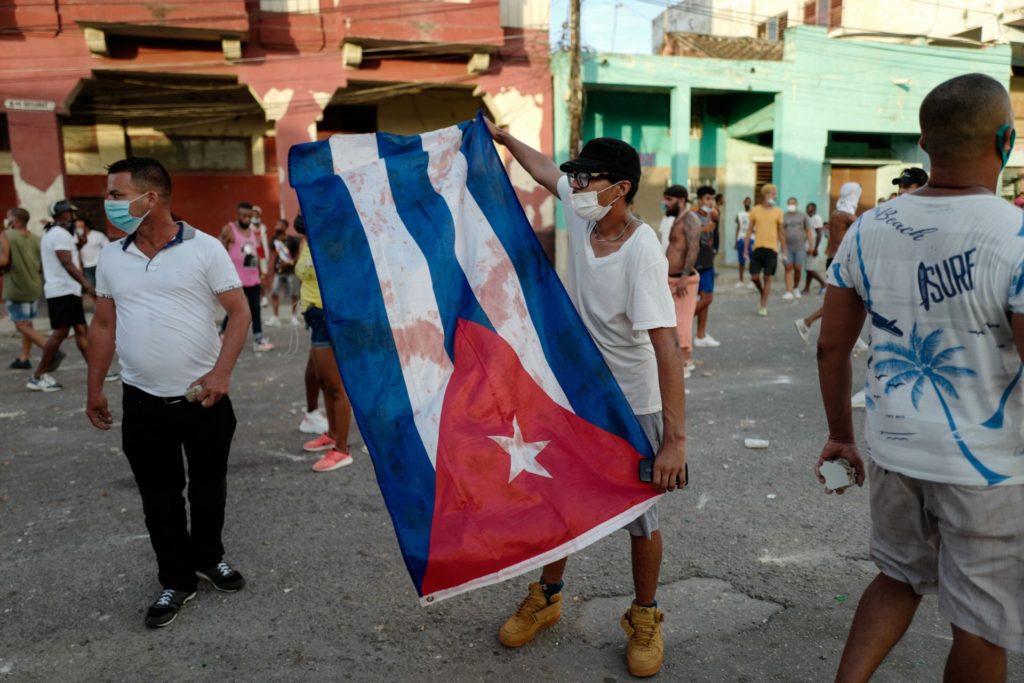 A man waves a Cuban flag during a demonstration against the government of Cuban President Miguel Diaz-Canel in Havana, on July 11, 2021. Thousands of Cubans took part in rare protests Sunday against the communist government, marching through a town chanting “Down with the dictatorship” and “We want liberty.” (ADALBERTO ROQUE/AFP via Getty Images)

“We will not hand over our sovereignty, or the independence of the people, or the freedom of this nation. We are many revolutionaries in this people who are willing to give our lives … for conviction,” Díaz-Canel said, according to the official newspaper of the Cuban Communist Party, Granma. “They have to pass over our corpses if they want to confront the Revolution and we are willing to do everything and will be on the streets combatting.”

“This is why we are calling all the revolutionaries of our country, all the communists, to go to the streets anywhere that these provocations are happening today, from now on through all these days,” Díaz-Canel urged.

The Castro underling declared an “order of combat” against the peaceful protesters and accused them of being “annexationists.”

“We will not allow any mercenary counterrevolutionary bought off the by the government of the United States, a sellout to the Empire … to destabilize our country,” he asserted.

No evidence has surfaced since the protests began of any American government influence in the protests, nor have any reports surfaced of American citizens being involved at press time. Some protesters did take the streets waving the American flag or wearing American flag clothing, as the flag has become a global symbol of human rights and freedom – most prominent in this context during the 2019 Hong Kong anti-communist protests.

The Castro regime attempted to organize pro-communist rallies on Sunday in response to the massive outpouring of rejection for the regime, shutting down Havana’s Plaza of the Revolution and bringing in government cronies. The pro-Castro mobs were dwarfed by the thousands in nearly every major city in the country calling for an end to the regime.

Cuban government officials have not released any official estimates on how many people participated in the protests or how many were arrested. As the protests erupted spontaneously, no dissident group has any realistic sense of just how many people took the streets. Most major journalistic outlets are estimating the number of protesters to be in the thousands, however, fueled largely by the rallies in Havana, Santiago, and Camagüey.

The anti-Castro outlet ADN Cuba reported that as many as 20 localities nationwide documented protests; it also reported at least one beaten to death in Palma Soriano, Santiago de Cuba.

Protesters were largely peaceful but endured a violent crackdown. Isolated incidents occurred in which protesters flipped over a police car – in response to police attempting to assault protesters – and at least one incident of looting of a government-run store. Much more commonly, protesters chanted “freedom!” and “down with communism!” in many protests, while others targeted Díaz-Canel personally, though he serves largely as a figurehead for the larger Castro family apparatus.

Videos surfacing on social media before the regime cut access to the internet appear to reflect the sound of gunshots from police in Havana and locals reported multiple civilians injured. Camagüey, Guantánamo, and Matanzas also reported police street beatings, gunshots, and use of tear gas to deter protesters. No reports have surfaced of any protester carrying a weapon, though some attempted to throw rocks at police officers beating fellow protesters in the street.

In addition to the protesters, multiple reports have surfaced of violent beatings and arrests of journalists. Among the most dramatic images to come out of the protests is that of Associated Press photographer Ramón Espinosa, who police assaulted for unknown reasons while doing his job in Havana.

Police raids appeared to continue in the early morning hours of Monday. ADN Cuba reported that at least one Havana neighborhood woke up to police gunshots against people believed to be protesters. An anonymous source in Havana told the outlet that police special forces were hunting suspected protesters “like dogs” and that any attempt to resist arrests, beatings, or worse was largely futile without weapons.

In Cárdenas, Matanzas province, reports surfaced on Monday of families attempting to visit relatives in the hospital after police shot them and having police keep them out of the hospitals. Police have prevented protesters and journalists from compiling an accurate list of those injured or killed on Sunday.