The human rights group Cuban Prisoners Defenders revealed this week it has confirmed the existence of 805 political prisoners in Cuba, a 500-percent increase from December 2020 and about 130 more than in November.

While the nationwide anti-communist protests on July 11 fueled the first round of mass detentions, beatings, and abuses against suspected dissidents, the large increase in the number of detained in a single month appears to be the result of a second round of protests that received significantly less attention from international corporate media on November 15. The details bookend a year of especially severe repression against political dissidents on the island after four years in which President Donald Trump’s policies to keep money out of the Communist Party’s hands limited its ability to abuse the people.

As always, Cuban Prisoners Defenders warned that the 805 people are only those the Castro regime admits it arrested, indicted on politically motivated charges, and kept in a jail or prison – as opposed to under house arrest or simply in an undisclosed location.

“These are a small fraction of the real figures, whose total verification is simply unattainable,” the NGO asserted.

The vast majority of new cases that Prisoners Defenders added to its list in December were people arrested during or in the aftermath of the July 11 protests. It noted the regime arrested an estimated 8,000 people that day, however, and many remain under house arrest or disappeared to this day.

“There are 23 cases of minors at the time of detention (14, 15, 16 and 17 years of age) who are being criminally prosecuted with numerous years’ imprisonment requested for most of them,” the organization further detailed. “The average age of the imprisoned protesters is 34, a profile far below the demographic profile of Cuba, one of the most aging countries in the world.”

The organization’s report in November found 683 political prisoners confirmed, about a 400-percent increase from November 2020. 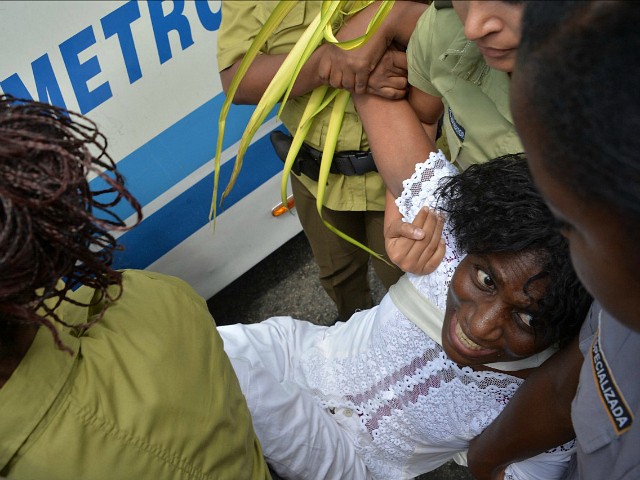 A member of the Ladies in White Human Rights organization is arrested during a march on March 20, 2016 in Havana. (Photo credit should read ADALBERTO ROQUE/AFP/Getty Images)

The Communist Party uses a variety of tactics to make the number of political prisoners in the country appear smaller than it is. One common one in the advent of the internet era – where awareness of human rights crimes can occur extremely quickly in large populations – is to temporarily arrest and brutally assault known dissidents. Civil society leaders such as Berta Soler, the head of the Ladies in White pro-democracy group, face beatings and arrests at least once a week, but never face formal criminal charges and authorities do not document their detentions – meaning human rights groups cannot include these arrests in their statistics. 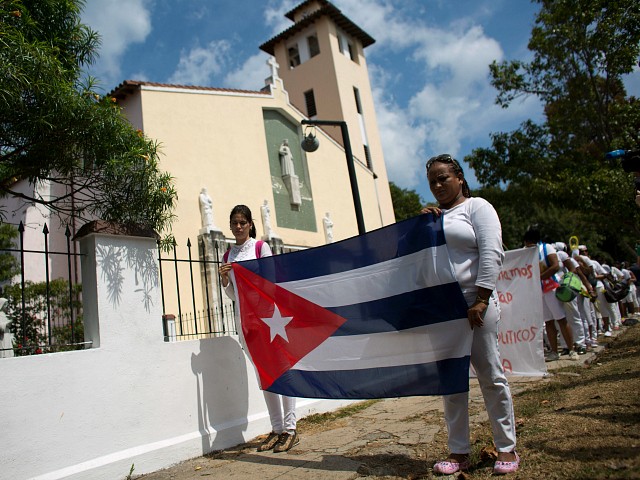 Another tactic is the arrest of individuals for what Prisoners Defenders described as “pre-criminal” offenses. The government openly admits it has no evidence these individuals have committed any crimes or probable cause for arrest. The regime does not accuse them of anything, so they cannot be documented as political prisoners because regime officials do not object to their politics publicly. These people, however, are often friendly with dissident groups, artists, journalists, or another class of individual the Communist Party views as a threat. Prisoners Defenders announced it had documented “another 11,000 civilians who do not belong to opposition organizations – 8,400 of them convicted and 2,538 condemned … for charges referred to in the Penal Code as “pre-criminal,” i.e. “without crime.”

Adding to reasons for global condemnation of the communist regime, on Thursday the Committee to Protect Journalists (CPJ) identified Cuba as the Latin American country that most imprisons journalists. CPJ publishes an annual list of the world’s top offenders against the freedom of the press; while communist China topped the list this year, its subsidiary regime Cuba ranked at the top in its region. Even here, however, CPJ could only confirm the existence of three imprisoned journalists.

In Cuba, one of the few countries in the region that regularly appears on the prison census, there are currently three journalists in prison — a figure that does not account for the greater number of reporters subject to regular intimidation tactics that include short-term arbitrary interrogations and arrests, along with systematic efforts by Cuban authorities to stifle independent journalism.

Six journalists were imprisoned in Latin America as of December 1, 2021:

and one in Brazil.

While a relatively low number, CPJ has found a disturbing decline in press freedom in the region.https://t.co/f06Qq0XQUL

Much more commonly, the regime persecutes journalists by forcing them into house arrest or simply beating them. Luz Escobar, a journalist with the independent outlet 14 y Medio, regularly documents how regime agents surround her apartment building and ban her from leaving the house in Havana if authorities believe any dissident activity may occur.

On Wednesday, the independent outlet Cubanet – which regime officials often use Huawei technology to block on the island – reported that masked men entered the home of citizen journalist Mabel Páez and brutalized her on Tuesday night with no explanation, clearly agents of the state.

The regime identifies nearly everyone in possession of a mobile phone as a threatening journalist, a prime example being the widespread arrests of Cubans for filming July 11 protests, even when no evidence existed that they participated in the event. In one particularly egregious case, a civilian named Yoennis Domínguez de la Rosa was sentenced to five years in prison for filming a protest demanding justice in a case of child rape.

Aside from passing interest in July, the world has largely turned a blind eye to communist abuses in Cuba. The European Union, in particular, continues to do business with the Castro regime while offering superficial support to civil society. On Thursday, two Cuban winners of the E.U.’s Sakharov Prize for Human Rights – the Ladies in White’s Soler and pro-democracy champion Guillermo Fariñas – wrote a letter to top E.U. foreign affairs official Josep Borrell asking the international institution to rescind their prize if they are not interested in supporting their cause.

Writing that they felt “abandoned and undervalued,” Soler and Fariñas asserted, “the Sakharov Prize should be a commitment by all parties to never use diplomatic silence in the face of human rights violations, and even less so in the face of crimes against humanity.”

“If this situation continues, the Cuban Sakharov Prize winners who have not yet had their lives taken away by the regime will propose to the Ladies in White collective, and myself Guillermo Fariñas as well, that the withdrawal of our Sakharov Prizes be considered, even with immense pain,” the letter asserted. “In this struggle, the victims need to be supported by giving them voice and a real support, and our Sakharov Prize must live in this context [of that support], and not the opposite.”