De Moraes formally holds one of 11 seats on the Supreme Federal Tribunal (STF), Brazil’s top court. Unlike the U.S. Supreme Court, the STF has far broader authority than simply being the federal court of last resort – it can order arrests and prosecute individuals.

With de Moraes on the bench, it has expanded its own powers to silence and imprison Brazilians for what de Moraes has branded “criminal speech,” most recently sentencing a Congressman to eight years in prison over a Youtube video in which the lawmaker, Daniel Silveira, condemned the STF for abusing its power. De Moraes is in charge of a sprawling operation against alleged “fake news” following the election of Bolsonaro in 2018.

Silveira, a fellow conservative from Rio de Janeiro, was released after Bolsonaro pardoned him following the STF’s sentencing on “criminal speech” grounds.

Bolsonaro reportedly requested on Tuesday that the STF itself investigate de Moraes for abuse of power. The STF almost immediately rejected the petition.

STF Minister (the formal title for supreme court justices in Brazil) Dias Toffoli handed down the ruling rejecting the investigation, claiming that nothing that de Moraes had done “constitutes a crime.” Being in charge of a criminal probe into “fake news,” Toffoli wrote, was “no reason to conclude that he [de Moraes] would have any special interest in relation to the regular exercise of his jurisdiction” – meaning that his status of investigating “fake news” did not inherently mean he was beyond the limits of judicial powers.

Toffoli claimed that Bolsonaro was attacking de Moraes “for the simple fact of being a judge.” 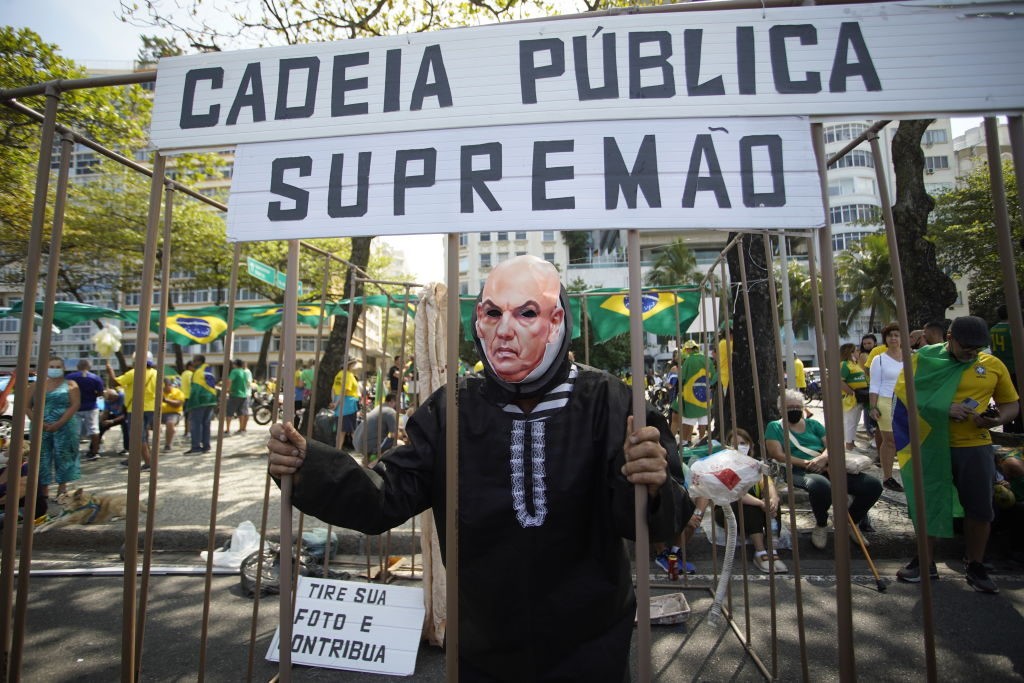 File/A supporter of Bolsonaro poses for a picture wearing a mask of Minister Alexandre de Moraes of the Supreme Federal Court at Copacabana beach on September 07, 2021 in Rio de Janeiro, Brazil. Brazilians have taken the streets as they commemorate their Independence Day to show both support and rejection for Jair Bolsonaro’s administration. (Wagner Meier/Getty Images)

Bolsonaro’s legal team reportedly responded to the rejection by filing a complaint with the Prosecutor-General of the Republic (PGR) office that remains pending at press time. The left-wing Folha de Sao Paulo newspaper noted this week that Bolsonaro had already tried to impeach de Moraes through a Senate petition and have him removed from public office for at least eight years.

Contrary to Toffoli’s conclusion that Bolsonaro was targeting de Moraes solely for “being a judge,” de Moraes had ordered significant violent action against civilians for crimes of expression that would defy the legal codes of many democratic countries. In May 2020, for example, de Moraes ordered police raids against the homes of 29 people, including journalists and comedians, on dubious “fake news” grounds.

“The operation’s targets were an eclectic and influential cast of hardcore Bolsonaristas including a former Femen activist-turned-anti-abortion-militant;” the U.K. Guardian listed at the time, “a comic and musician whose repertoire includes a sexually explicit JK Rowling parody called “Harry Fucker”; a gun-toting, communist-bashing congressman; a hard-right blogger; and a multimillionaire retail magnate famed for placing giant replicas of the Statue of Liberty outside his stores.”

One of the individuals targeted, comedian Rey Biannchi, published a mobile phone video of the police operation on his home, apparently taken by his sobbing wife as police raided the home at 6 a.m.

De Moraes also ordered a raid on the head of the now defunct conservative news outlet Terça Livre, Allan dos Santos, who was forced into exile in the United States for running a media outlet. De Moraes has since ordered dos Santos’ arrest and extradition and attempted to file for an Interpol red notice, or call for arrest, but his request was rejected.

The most high-profile persecution case de Moraes has pursued, however, has been against Silveira, the Congressman. Police arrested Silveira in February 2021 after he published a video on Youtube in which he called for the removal of de Moraes and nearly every other STF minister from the court, accusing them of having “no character, no scruples, no morals.” De Moraes claimed that the video was evidence of the crime of  “incitement of the population to the subversion of the political and social order.”

After spending 11 months in prison, de Moraes’ probe resulted in another attempt to arrest Silveira in March that resulted in the lawmaker barricading himself in his office, where he enjoys legislative immunity. Silveira ultimately left the office when de Moraes imposed thousands of Brazilian reais in fines per day, an act Silveira said was too onerous on his family’s finances to allow him to  continue.

The STF ousted Silveira from his legislative seat in April and sentenced him to another eight years and nine months in prison for criticizing it.

“Freedom of expression exists for the manifestation of opposing opinions, jokes, satires, for wrong opinions, but not for criminal opinions, hate speech, an attack on the democratic state of law,” de Moraes said in his ruling.

“This Court and the world in general agree that freedom of expression is not an absolute right,” another STF minister, Luis Roberto Barroso, said at the time.

Bolsonaro condemned the ruling as unacceptable and released Silveira with a presidential pardon. The STF is expected to challenge the idea that the pardon would also restore Silveira’s Congressional seat, which he won in a free and fair election.

“It is very easy to say, ‘Daniel Silveira, take care of your own business. I am not going to say that,” Bolsonaro said, announcing the pardon. “I was a Congressman for 28 years and, in that House, with all its possible defects, that is where the essence of democracy is, too.”

“Brazil today has political prisoners,” Silveira asserted. “That is unacceptable in a country that demands democracy, that speaks of democracy, but acts like a dictatorship. Do not bow before state arbitrariness. Those who rule Brazil are us.”