Multiple polls out of Brazil this weekend show socialist former President Luiz Inácio Lula da Silva with a sizable lead against incumbent conservative Jair Bolsonaro, though not a big enough lead to deter a runoff vote.

Brazilians will go to the polls on Sunday to choose a president, but the winner will only move on to take over the top office in the country if he receives more than 50 percent of the vote. If not, the top two candidates – very likely to be Lula and Bolsonaro – will move on to a runoff election later this year.

Lula – whom the nation’s top court, the Supreme Federal Tribunal (STF), allowed to run for president despite having been convicted of corruption during his last presidential term – has consistently led Lula in polls throughout the past year. Lula also led Bolsonaro in polls during the 2018 election before he was arrested and convicted of having used public funds to buy a luxury beachfront property. Lula managed to top presidential polls in which most respondents also said they wanted him in prison.

Lula is the founder of Brazil’s Workers’ Party (PT), arguably the most successful far-left party in the history of Brazil, and counts on enthusiastic support from the nation’s leftists. Bolsonaro, on the other hand, is running as part of the conservative Liberal Party, which he joined last year. He had previously belonged to and won the presidency under the banner of the Social Liberal Party, which is also a conservative party. Brazil is home to dozens of viable political parties and does not have a tradition of dominant, longstanding parties outside of the recent history of the PT. 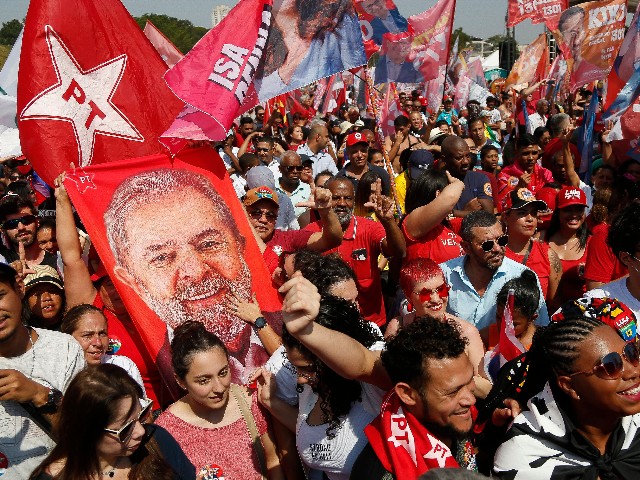 Lula and Bolsonaro have waged an aggressive, insulting campaign against each other. Bolsonaro has accused Lula of being a “drunkard” – repeating longtime rumors of alcohol abuse – while Lula has claimed that Bolsonaro, a vocal evangelical Christian, is possessed by Satan.

A poll published Saturday by the firms Ipespe and Abrapel found that 46 percent of Brazilians intend to vote for Lula, while 35 percent support Bolsonaro – a one-percent increase in support for Lula since September 17, the last time the firms published their survey. Only two other candidates – the leftist Ciro Gomes and center-right candidate Simone Tebet, received more than zero percent of the vote, although the survey offered 11 candidates, intent to file a blank vote, and “don’t know.” Only four percent of respondents said they did not know who they were voting for, leaving a small pool of undecided Brazilians for the candidates to court.

A poll published last Thursday in the magazine Exame found a much tighter race, with Lula receiving 40 percent of votes, compared to Bolsonaro’s 37 percent–a technical tie, given the poll’s margin of error.

Regional polling also appears to show a slight advantage for Lula, though not enough to avoid a runoff. A series of IPEC surveys taken in each Brazilian state and published on Sunday showed Lula leading in 14 of Brazil’s states and federal divisions, compared to Bolsonaro leading in seven states and the candidates being in a statistical tie in five states. Two of the states that did not show a lead for either candidate are Rio de Janeiro, Bolsonaro’s home state, and the Brasilia federal district.

The Exame, IPEC, and Ipespe/Abrapel polls are mostly in line with how polling has gone throughout the past year. A fourth poll published Friday by the firm Brasmarket offered an outlier result: Bolsonaro received 44.9 percent of voter support, compared to 31 percent of respondents choosing Lula.

Bolsonaro and Lula will reportedly face off in a final debate on Thursday on the Brazilian Globo network. The encounter, if confirmed, is expected to be acrimonious, given the campaigning on both sides.

During campaign stops in August, Lula described Bolsonaro as being “possessed by the devil” and has referred to him as a “court jester,” declaring himself “the best president in the history of Brazil.”

“The people have to go back to having a little kebab, eating a little steak, and drinking a little beer,” Lula promised in one interview.

Bolsonaro, in turn, has called Lula a “drunkard” and accused him of destroying the country via corruption.

“Brazil is a great nation, it is a great country, but until recently it was being robbed by the left that was in power,” Bolsonaro said during his presidential campaign launch last month. Brazil, he continued, “doesn’t want more corruption. Our country wants order and prosperity. Compare the four years of my government with the four that the other guy was president for.”

Police investigators in Curitiba, the capital of Paraná state, uncovered a corruption scheme now known as “Operation Car Wash” as part of an investigation that began in 2014. During Lula’s presidency, and that of successor Dilma Rousseff, dozens of politicians of nearly every political party were implicated in receiving kickbacks from private corporations in exchange for the officials granting them lucrative, overpriced government infrastructure contracts. The kickback funds came from taxpayers’ dollars that were incorrectly spent on overcharged projects. Lula’s arrest and conviction resulted from police tracing the funding he used to buy a luxury beachfront duplex to one such kickback.