CARACAS, Venezuela — A committee of the U.S. Department of Justice released a statement on Wednesday urging the Federal Communications Commission (FCC) to deny an application to build an underwater internet communication cable connecting America to Cuba.

The companies ARCOS-1 USA Inc. and its direct subsidiary A.SurNet Inc. formally filed a request to directly connect Cuba with the United States via the installation of a new undersea telecommunications cable that would, in theory, provide the island nation with internet and data connectivity.

The proposal involves connecting Cuba with the United States through a modification of the ARCOS-1 subsea cable system, an 8,700-kilometer-long fiber optic submarine cable that connects the United States (from a station located in North Miami Beach) to several nations in the Caribbean, as well as Central and South American nations. Such modification would see the installation of a landing station in the Havana district of Cojimar.

Subsea cables such as the ARCOS-1 system are a critical backbone of the world’s entire communications infrastructure, carrying most of the world’s internet, voice, and data traffic across continents. As of November 2022, there are more than 550 subsea cables spread across the world. 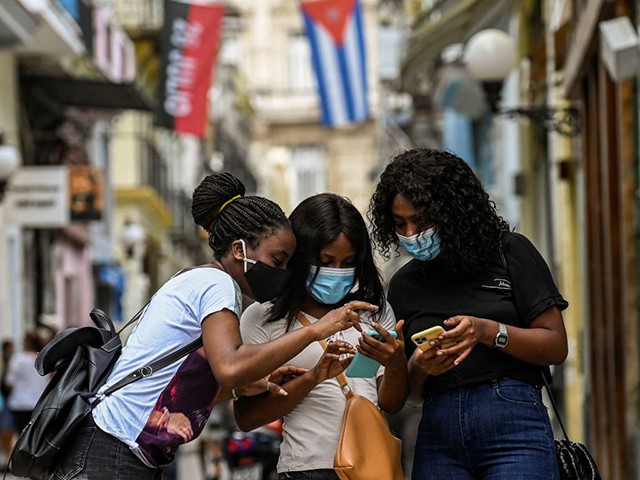 Women use their phones in a street of Havana, on July 14, 2021. (Photo by YAMIL LAGE/AFP via Getty Images)

“The Government of Cuba – which the United States recognizes as authoritarian and a foreign adversary of the United States – could access sensitive U.S. data traversing the new cable segment through its control of ETECSA,” the report warned.

Team Telecom further elaborated its reasoning by noting that the communist regime that has controlled Cuba since 1959 “has long represented a significant counterintelligence threat to the United States by virtue of its espionage and other intelligence activities targeting the United States.”

“Directly connecting an undersea cable from the United States to Cuba, where a Cuban state-owned company would have exclusive use of the cable, control over that cable’s Cuban landing station, and remote access to traffic on it,” the report concluded, “could advance the Cuban government’s intelligence objectives by giving it direct access to the U.S. persons’ communications and sensitive data traversing the cable.”

The Cuban government has long invested heavily in intelligence operations in the United States and against the American people, with sometimes deadly results. In one of the most notorious episodes in Cuban intelligence history, the Castro regime successfully murdered four American citizens after a spy ring known as the “Cuban five” infiltrated the Cuban exile community and shared location intelligence for the victims. The incident occurred in 1996 and targeted four men who volunteered with a humanitarian group known as Brothers to the Rescue which specialized in plane operations to rescue Cuban refugees lost at sea. In February of that year, the Castro regime shot the four men — Carlos Costa, Armando Alejandre, Mario de la Peña, and Pablo Morales — out of the sky during a rescue operation in international waters, a crime for which it has never paid.

Only one man was convicted for the death of the four Brothers to the Rescue members, Gerardo Hernández, one of the “Cuban Five.” Hernández was freed from prison under the administration of leftist American President Barack Obama and now runs the “Committees for the Defense of the Revolution” (CDRs), Cubans communist neighborhood espionage operations to identify and silence dissidents.

The Justice Department also warned against the proposed telecommunications project on the grounds that Cuba is a close ally of two of America’s biggest geopolitical enemies, Russia and China.

The Castro regime reacted to the Department of Justice’s report through Carlos de Cossio, the regime’s vice-minister of foreign affairs.

“This is the way in which the government of the United States pretends to comply with its declared commitment to promote internet use in Cuba, and its concerns for the well-being of the Cuban people, whom it mercilessly punishes with the economic blockade,” de Cossio tweeted on Thursday.

In 2021, President Joe Biden expressed the possibility of providing internet access to Cuban citizens amidst the historic July 2021 protests against the Castro regime, but ultimately did not do anything to help. During the protests, the regime’s ETECSA company blocked access to social media and instant messaging platforms to disrupt the flow of communications between protesters and the outside world.

Venezuela’s socialist regime provides internet connectivity to the Castro regime through the ALBA-1 subsea cable, whose construction finished in 2011 but went active in early 2013. Other than Venezuela’s ALBA-1, the only other active subsea cables that connect to Cuba are the GTMO-1, which provide high-speed internet access to U.S. military personnel in Guantánamo Bay, and GTMO-PR, which connects Guantánamo Bay with Puerto Rico.

Cuban internet ranks among the world’s slowest, with the available faster WiFi hotspots reserved for the nation’s upscale tourist hotels, which are out of reach of Cuban citizens. The Castro regime does provide fast-speed internet services, but its prices are astronomically unaffordable for the nation’s citizens, who have been kept impoverished after more than six decades of communism. Services can cost upwards of 111,230 Cuban pesos per month (roughly $4,631.54 as of December 2).

Team Telecom’s statement concludes by expressing, “although the United States supports the Cuban people’s access to an open, interoperable, secure, and reliable internet, the Committee found that this particular license application pertains to a cable landing that presents unacceptable risks to U.S. national security and law enforcement interests that cannot be mitigated.”

According to Reuters, an unnamed FCC spokesman said that the agency is reviewing the committee’s recommendations.