In a state where leftists use the public schools to promote their socialist ideology with impunity, imagine my surprise when a teacher handed out a flyer promoting racism.

A parent of a high schooler sent me the following flyer that was handed out in one of her son’s classes at El Camino Real High School in Woodland Hills, California.

I had no idea that it was acceptable in public high schools in California to promote the idea that an entire race of people are racist simply based on the color of their skin.

But there it is—in black and white (no pun intended): 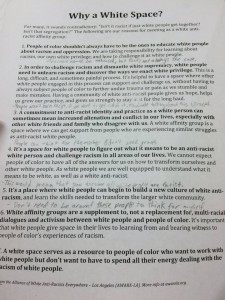 The handwritten annotation is by the parent of the boy who received the flyer. The text reads (original emphasis):

Why A White Space?

For many, it sounds contradictory: Isn’t it racist if just white people get together? Isn’t that segregation? The following are our reasons for meeting as a white anti-racist affinity group:

1. People of color shouldn’t always have to be the ones to educate white people about racism and oppression. We are taking responsibility for learning about our own white privilege and how to challenge it as white people.
2. In order to challenge racism and dismantle white supremacy, white people need to unlearn racism and discover the ways we enact white privilege. …
3. A commitment to anti-racist identity and practice as a white person can sometimes mean increased alienation and conflict in our lives, especially with other white friends and family who disagree with us. …
4. It’s a space for white people to figure out what it means to be anti-racist white person and challenge racism in all areas of our lives. …
5. It’s a place where white people can begin to build a new culture of white anti-racism, and learn the skills needed to transform the larger white community.
6. White affinity groups are a supplement to, not a replacement for, multi-racial dialogues and activism between white people and people of color. …
7. A white space serves as a resource to people of color who want to work with white people but don’t want to spend all their energy dealing with the racism of white people.

The idea that all “white people” are racist, and therefore need to make amends, is a deeply offensive and racist assumption.

Why a high school in a state where almost half the kids drop out would think it’s appropriate to distribute racist propaganda is sure to be of interest to the authorities and to parents everywhere.

Who would authorize such inflammatory material to be distributed to students?

An email to the school administration by the mother resulted in the following responses–first, an email back from the assistant principal, inquiring as to her son’s name (names, emails and other contact information have been redacted):

HI
Who is your son? and English teacher?
I will look into the matter

And then an email from another assistant principal, dismissing the entire thing without doing any investigation, other than again wanting the woman’s son’s name and the name of his teacher:

Thank you for your email.  The paper that your son received from his English teacher is part of a year long teacher training program on race relations and must have inadvertently been passed out by the teacher.

Can you please let me know the name of the teacher, so I can conference him/her?

According to my source, the flyer was handed out to the entire class deliberately, without much comment.  Given that it was not a history, social studies, or government class, but rather an English class, there is no legitimate educational rationale for this type of material.

Can you imagine if this document portrayed a stereotype of blacks, Hispanics or Asians instead of whites? The teacher, the principal and the assistant principal would likely be fired.

The document was published by a Los Angeles-based organization called AWARE-LA, which stands for Alliance of White Anti-Racists Everywhere-Los Angeles.

Upon examination of its website, it’s clear that this organization goes beyond the normal leftist-progressive bent; it is so committed to Marxist ideology that it apparently believes that anyone who’s ever earned and accumulated any wealth should have it confiscated and redistributed.

So, if material from this type of organization is considered acceptable for training teachers, that brings up a whole additional set of questions–but what’s most galling is that school authorities are more concerned about brushing it off than about rooting out what really happened.

I guess it’s acceptable for a California public high school to distribute racist materials as long as the target is white.

I’ll be looking forward to the outrage of liberals and leftists everywhere.  But don’t worry–I won’t hold my breath.