BAYSIDE, California — Representative Jared Huffman (D-CA) urged voters Saturday to “calm down” about superdelegates in a visit to his constituency in the second congressional district in northwest California.

Huffman is a superdelegate who has endorsed former Secretary of State Hillary Clinton. But his district, which includes the liberal northern suburbs of San Francisco and the marijuana-growing region of Humboldt County, is likely to back rival Sen. Bernie Sanders (I-VT).

“I really don’t like the superdelegate system,” Huffman told Breitbart News. “I’d just like to let voters vote and decide who wins and loses. I’m kind of old-fashioned that way. But what I have promised everyone is that I’m not trying to rig this election as an insider somehow in the Democratic Party in a way that overrides the voters. I’m not going to do that.

“I’m not going to go to the convention and cook the books, or rig an outcome,” the San Rafael-based Democrat continued. “What I’m going to do is follow what the voters of this country do in the primaries and the caucuses. There has never been an election where a superdelegate has decided the nominee. I don’t think this is going to be the first, so I hope everyone kind of calms down a little on the superdelegate issue.”

In a fundraising speech to roughly 120 supporters at the rustic Bayside Grange event hall in this unincorporated community in Humboldt County, Huffman appealed to party unity. He ripped Republican presidential frontrunner Donald Trump and bemoaned what he called a “crass,” “juvenile” and “depressing” election season.

Huffman also warned that the makeup of the Supreme Court is “hanging in the balance,” along with its attendant decisions on abortion, campaign finance reform and climate change. 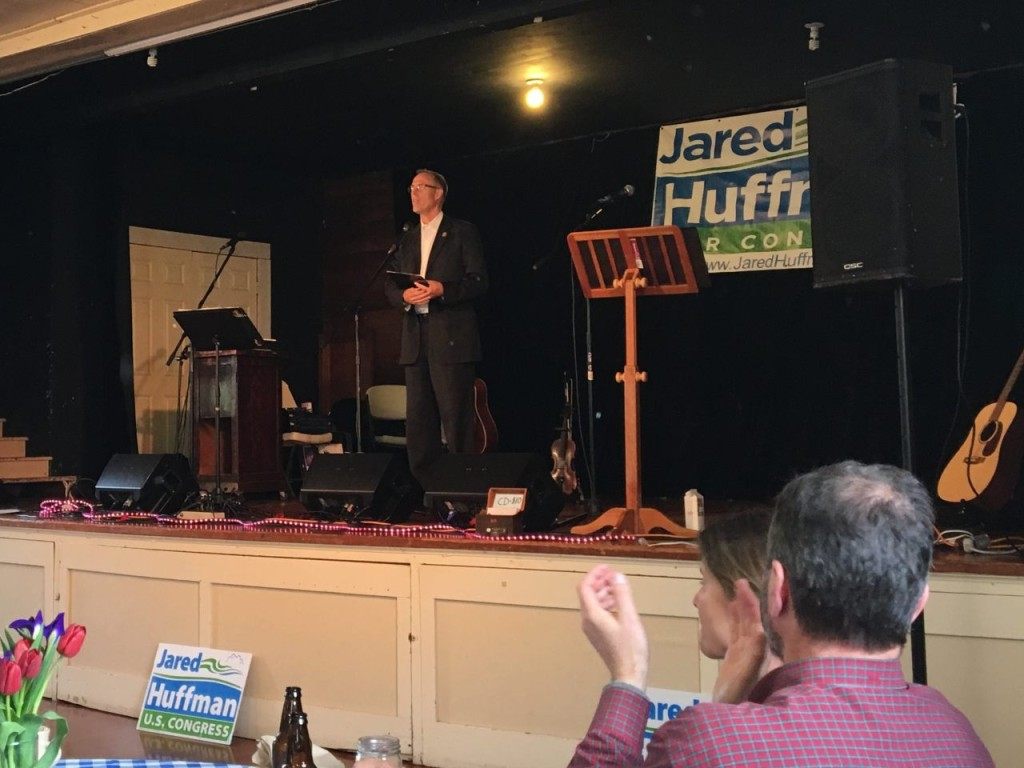 “There are fundamental different directions this country will take depending on the outcome of this election,” Huffman said.

Think about, for a moment, what a President Donald Trump would look like. I know that’s kind of painful, but just imagine for a moment the division and the conflict that would come, in addition to all of those policy choices that we would lose out on. Imagine the loss of our credibility all over the world, think about that, and the chaos that would ensue. This is a guy who says his foreign policy strategy is to be ‘unpredictable.’ What could go wrong? He’s a guy who says, ‘Maybe we should give nuclear weapons to Japan and South Korea, then we won’t have to spend so much money defending them;’ ‘Maybe we should get rid of NATO;’ ‘We definitely ought to bring back torture.’

This is the Donald Trump foreign policy platform. And I think it’s pretty scary to imagine what would happen to our country if this was our commander-in-chief. So as hard as it is to imagine that, it’s also important to know that this is kind of a golden opportunity for us in this year’s election. We have an opportunity to make this an absolute landslide for Democrats. Whether you’re with Hillary or Bernie, this is the big one. Because Ted Cruz ain’t much better than Donald Trump. In fact, in some ways, he’s even worse. We have got to get out there and win this.”

Huffman also sought to reassure a wary progressive constituency about the Democratic Party’s superdelegate system, in which members of Congress and party officials are free to vote for whomever they choose in the primary, regardless of the results of the primary in their state. Currently, Hillary Clinton holds a narrow lead in delegates chosen by the electorate, but a wide lead in superdelegates.

Earlier in his speech, Huffman — a ranking member of the Committee on Natural Resources, and a longtime advocate for the state’s politically powerful but controversial environmental interests— criticized the Westlands Water District of the Central Valley for what he called “bad ideas that are designed to take away our water.”

Last week, Huffman and several other California House Democrats called for congressional hearings into the Central Valley water agency’s recent settlement with the federal government over drainage for its farms.

“Those Central Valley salmon runs are really the staple of the whole commercial fishing industry when it comes to salmon, and they’re under continuous attack by folks like the Westlands Water District,” Huffman said.

“Right now, as we sit here, they’re suing to try to take away Humboldt County’s water right on the Trinity River. And it’s just nonstop. Every year, when we’ve fought to release cold flow just in time to avoid a massive fish kill on the lower Klamath River, they have gone to court and attempted to stop that water from flowing into the river and keeping these fish alive. So we are constantly fighting against these bad ideas,” he added.

“We have and will continue to fight the needless waste of water anywhere in the state,” Amaral said. “It’s ironic and ridiculous that Huffman and his bosses in the environmental movement are always quick to drone on and on about conservation, and that ‘farmers need to be more efficient.’  Yet when they demand 90,000 acre-feet of water be released for salmon on the Trinity River, or that the people of the state of California get starved of water for some smelt, all of a sudden they forget what the word ‘waste’ means. Billions of gallons flushed to the ocean to protect fish, while kids soccer fields’ go dry up and down the state, and the fish are no better off for it.”

“What was on the menu tonight [at the Huffman event]?” Amaral added. “Salad? Vegetables? Fruit? Meats? Nuts? All of it came from farmers in the Westlands Water District. A thank-you would have been sufficient.”