ANAHEIM — A group called “Latinos for Trump” held its first rally in Orange County on Sunday, named “Operation Taco Bowl” after an infamous Donald Trump tweet (and Democrats’ response). Hispanics and African Americans joined other Trump supporters in voicing both their support for the Republican presidential nominee and their opposition to the Democratic Party and its nominee, Hillary Clinton.

When asked how he feels about the Democratic Party claiming the Hispanic vote, Herrera told Breitbart News:

It’s just pandering. They don’t care about us. We can see middle class income down, Hispanic wealth is down, African-American wealth is down. You look at the top Democrat cities, they’re all down. It’s all about talk, no action. The statistics prove they have done nothing for everybody.

Asked how fellow Hispanics react to his political leanings, he said:

They’re not informed. They listen to Univision. They listen to the mainstream media, which happens to be very biased. They don’t know the truth and why we’re here, what we stand for. That’s why we’re having this event today and trying to get that message out to the community.

Approximately 60 people were at the rally, which saw no counter-protests. 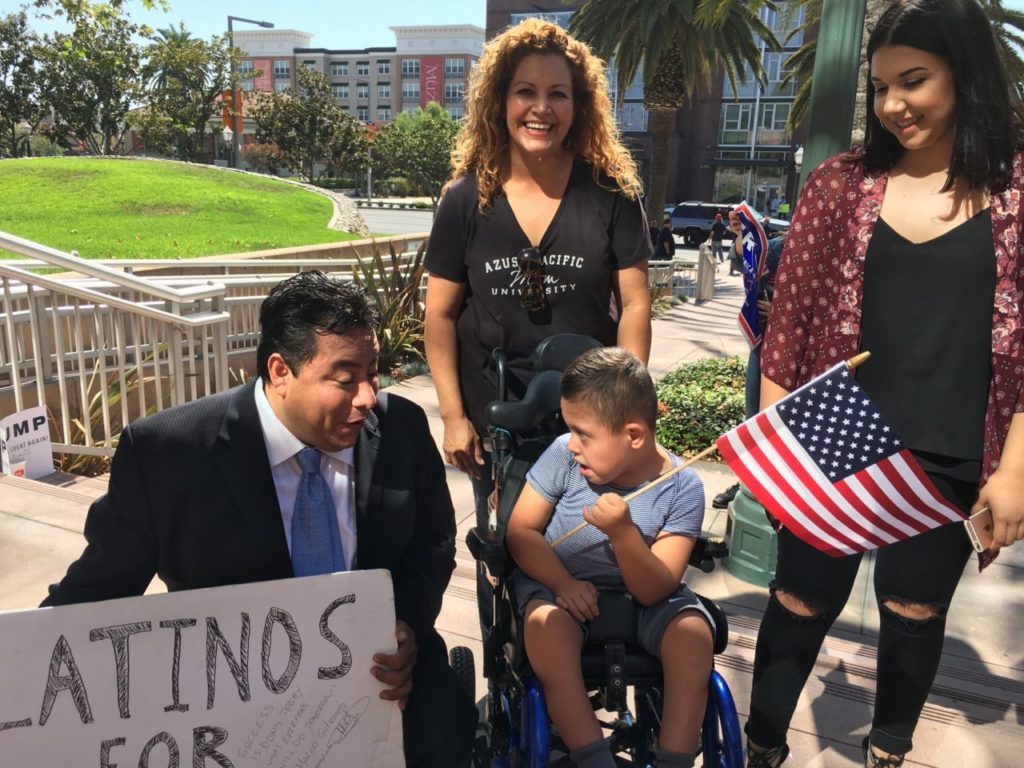 “I am so glad that Latinos are speaking out about what is going on,” Chanel, a self-described “activist in the black community,” said at the podium in front of Anaheim City Hall:

It’s a disappointment. We both kind of serve the same message because we have both been used by the Democratic Party. The black community, also the Latino community. They promised the Latinos amnesty June the 23rd; that did not come true. So that’s a sign that you were used. My people have been used for years. And to tell you the truth, I’m an escapee from the Democratic plantation.

Some of the signs at the protest read, “Blame the Democrats for slavery!” and there were life-size Hillary Clinton dolls dressed in various costumes, including a hospital gown. Another Clinton mannequin was dressed in all black with a huge gold dollar sign chain around her neck. 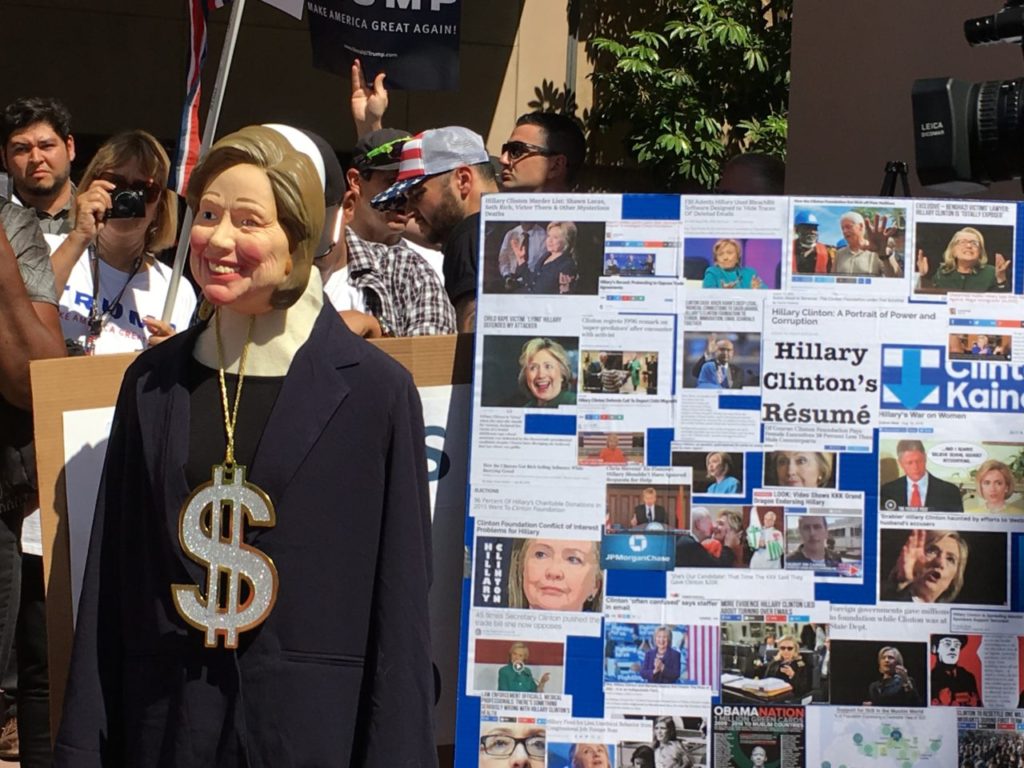 Marco Gutierrez, 42, said he was born and raised in Mexico but came to the U.S. legally. “Ever since I got my citizenship in 2003, I have been a Republican,” he told Breitbart News. “I think Democrats are too far to the left. They lost their way.” Asked if he thinks Trump wants to deport the Mexicans, Gutierrez said, “I think he’s going to apply the law of the land.”

I work in the art industry and a lot of them [Hispanics] are saying Trump is going to throw us out, he’s racist, he’s xenophobic … but what they don’t understand is that us Mexicans and Hispanics are people of commerce. We’ll sell anything and buy anything. The ideals, what you were saying of Republicans and even Libertarians align more to our culture than anything else. They’ve just been brainwashed. We [Latinos] are merchants by birth; we don’t like handouts. 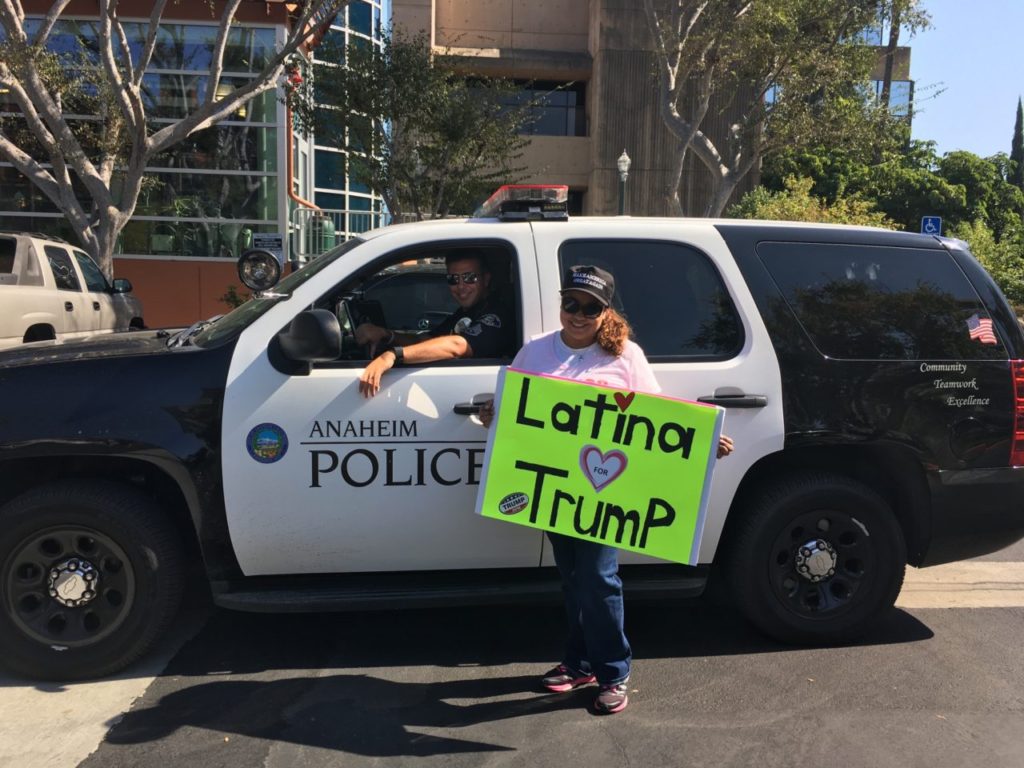 Ximena Barreto, 31,  said she has always been a Republican “because Colombia is very Catholic, so its very conservative.” Asked how other Latinos respond to knowing she is voting for Trump, she said, “I think they are brainwashed by the media because they don’t do their own research. So they say, ‘Oh, you’re a racist to your own people.'”

She added, “Both of my parents are Mexican immigrants. And it was Republicans and businessmen like Donald Trump who gave them jobs. Democrats did not help us. We need jobs, not handouts.”