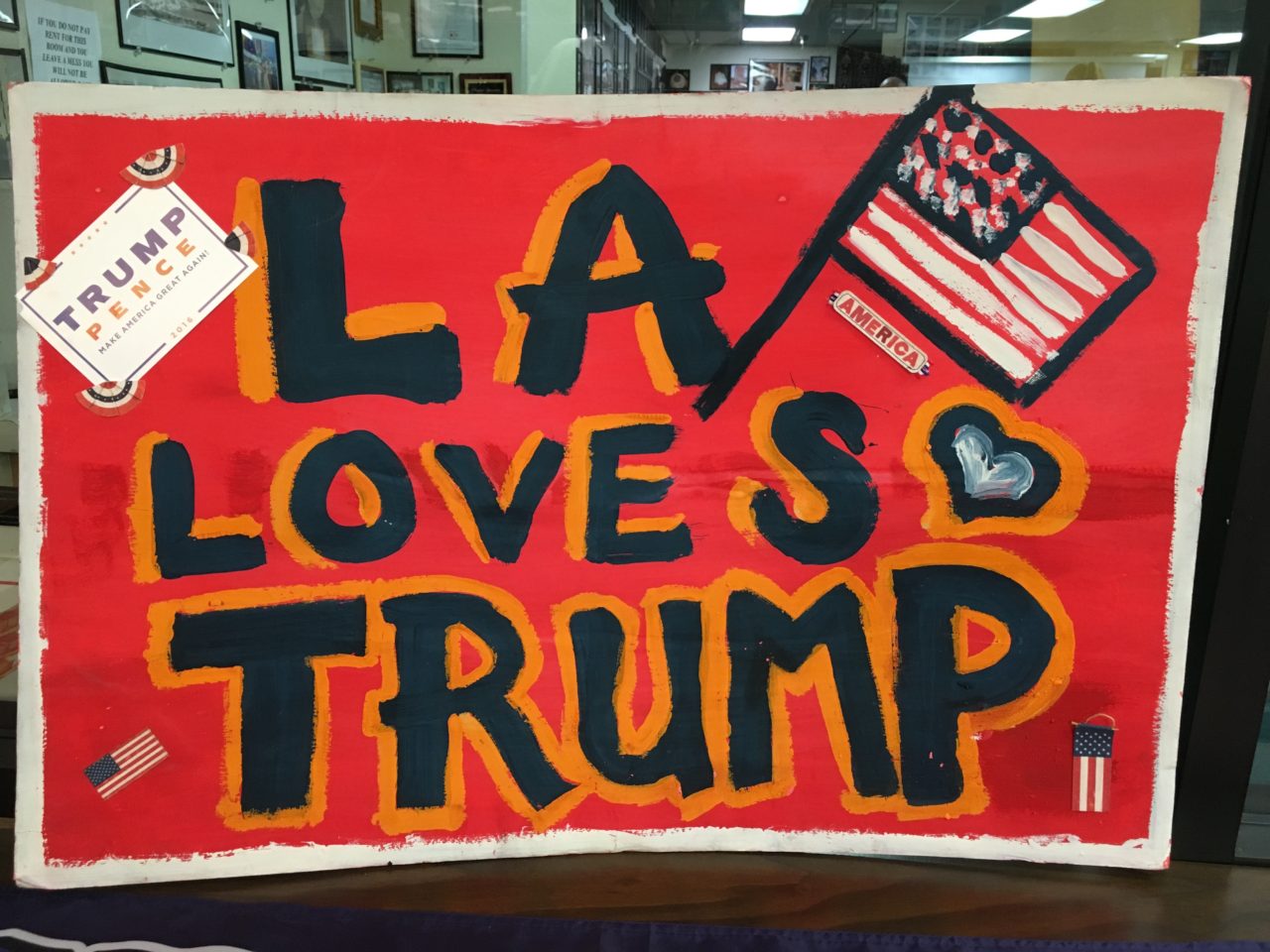 Trump’s L.A. headquarters is located at 2338 E. Anaheim Street, #201-C in Long Beach — an area colloquially referred to as “Cambodia Town,” and a Democratic stronghold for the last few years. Trump opened his California headquarters in Sacramento this past April.

The launch started off with prayers asking “God to bless America and to bless Donald Trump and keep him safe,” followed by a traditional Cambodian dance of greetings and good wishes, Robam Choun-Por (known as the “blessing dance”).

A moment of silence was also observed for those who lost their lives during the September 11 terrorist attacks. Sunday marked 15 years since the devastating attacks on U.S. soil took place in New York.

Jon Cordova, the Communications Director for Donald Trump’s presidential campaign in Golden State, came down from Northern California for the grand opening. “She made it very clear that we are deplorable individuals,” Cordova said of Clinton’s statements about many Trump supporters this past Friday night.

In spite of the attacks, Cordova insisted that Trump surrogates use positive messaging. “I know Hillary gives us a lot of material to talk about negative stuff. Don’t. Be positive. We’ve got the best candidate out there,” he said of Trump. “The best leader. And this is the time. He’s the man for the time.”

He added, “What we see out here are people closeted that are supporters are in the shadows supporting Trump. And it’s because they’re afraid of being bullied by liberals who are very vocal and say that anyone who is supporting the Trump campaign must be a bigot and a racist.” 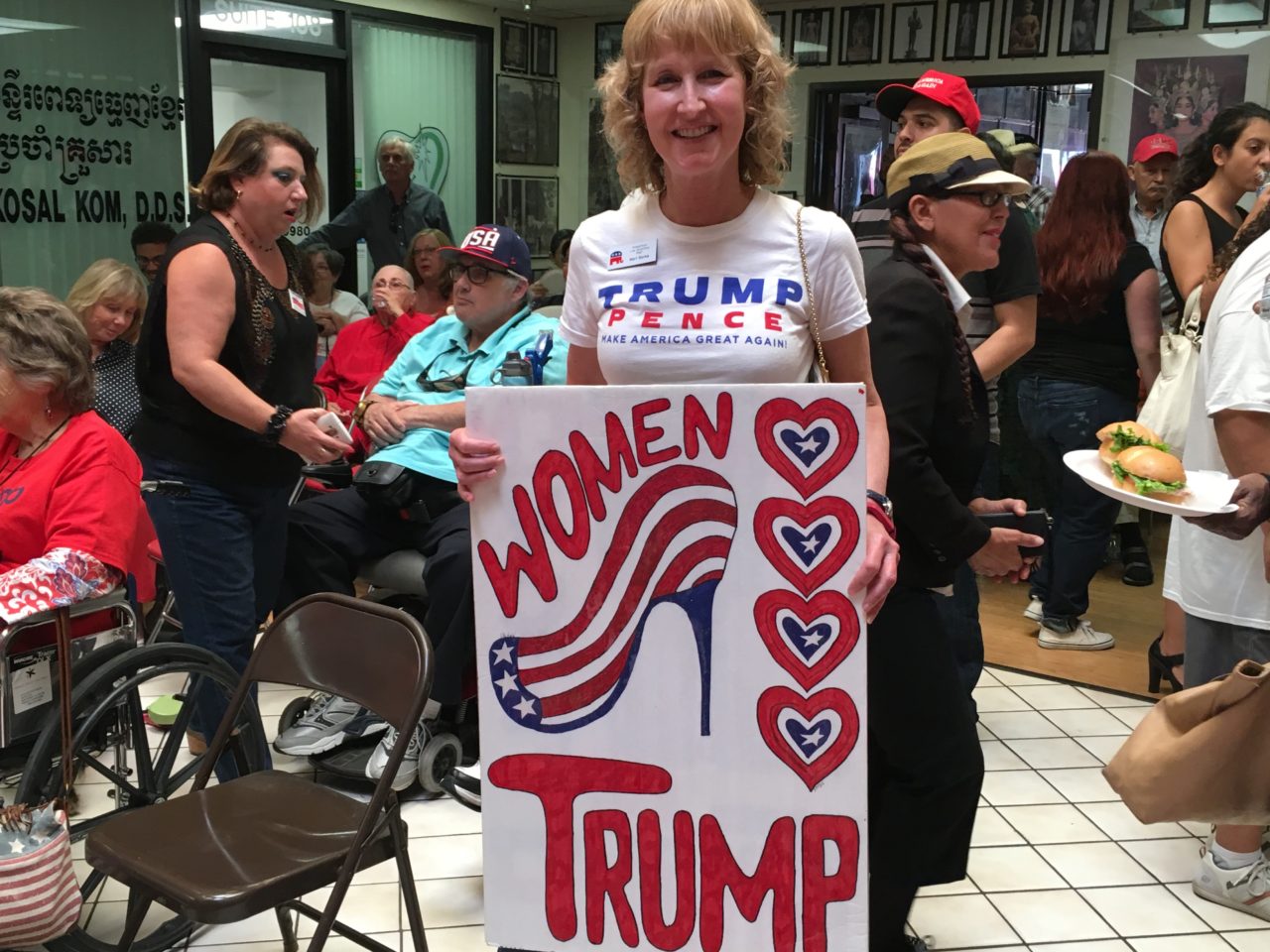 Breitbart News spoke with several of the individuals present, all of them hailing from various backgrounds, reflective of Long Beach’s history as one of America’s most diverse cities.

A young man held up an “Indians for Trump” sign. Another read “Real Men Vote 4 Trump,” and another read “This Hispanic Mexican American Latina Female from Orange County is Voting 4 Trump.” 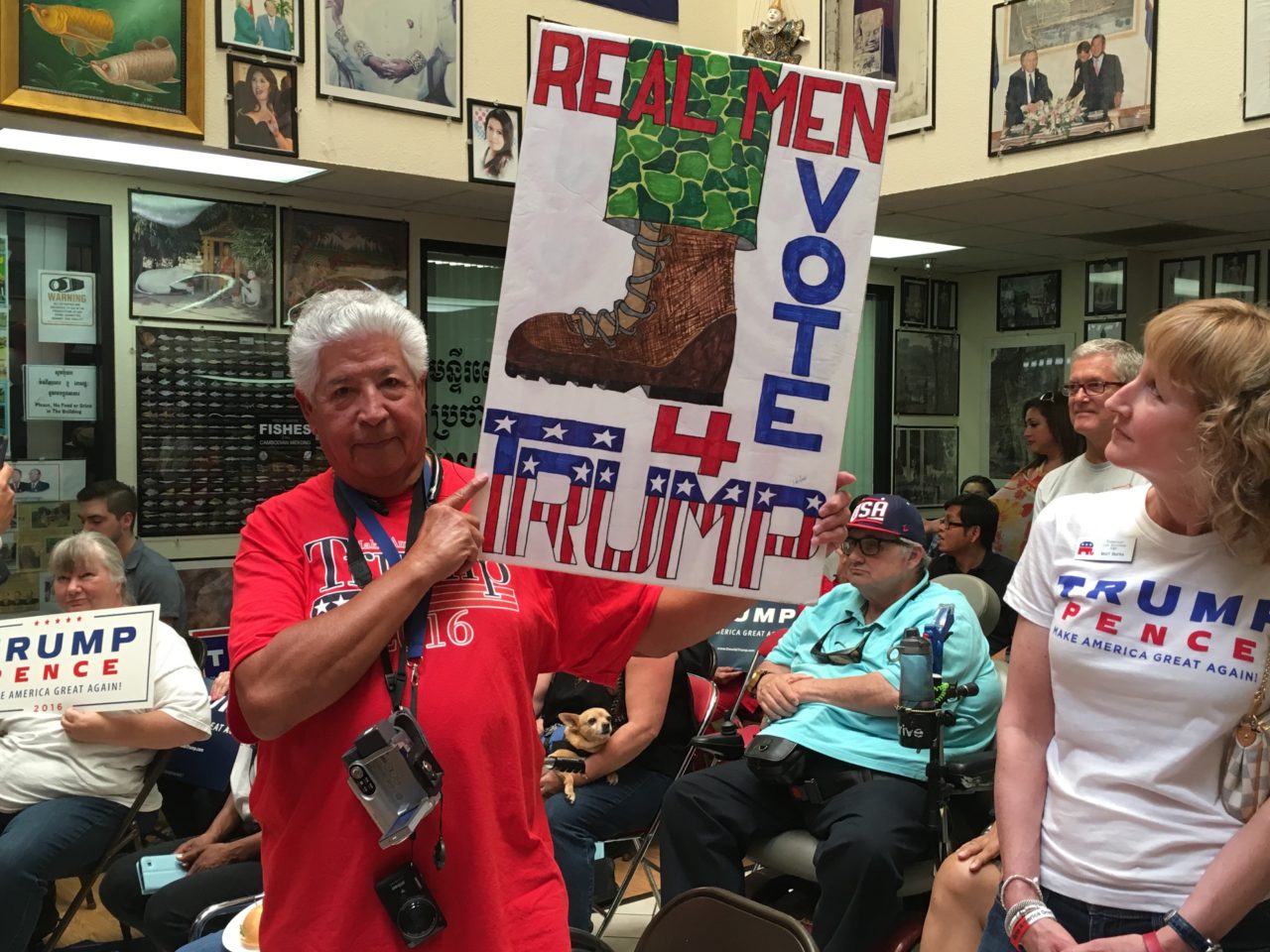 “I’m a Democrat. I’m Hispanic, of Mexican extraction,” Michael Barragan told Breitbart News. “But a lot of things that Trump says, I feel should be done.” He said he endorsed Trump’s idea of building a wall and suggested taxing money going south of the U.S. border to Mexico in order to pay for it.

Shirley Husar, who is an African-American Trump delegate for the State of California, said, “A lot of African-Americans are disgruntled with Hillary Clinton.” She added, “They know that we are under an administration that we could go into a crime bill that wants to do mass incarceration [and] that calls black people ‘super predators,'” referring to Hillary Clinton calling youth in gangs “super-predators” with “no conscience, no empathy” in 1996. 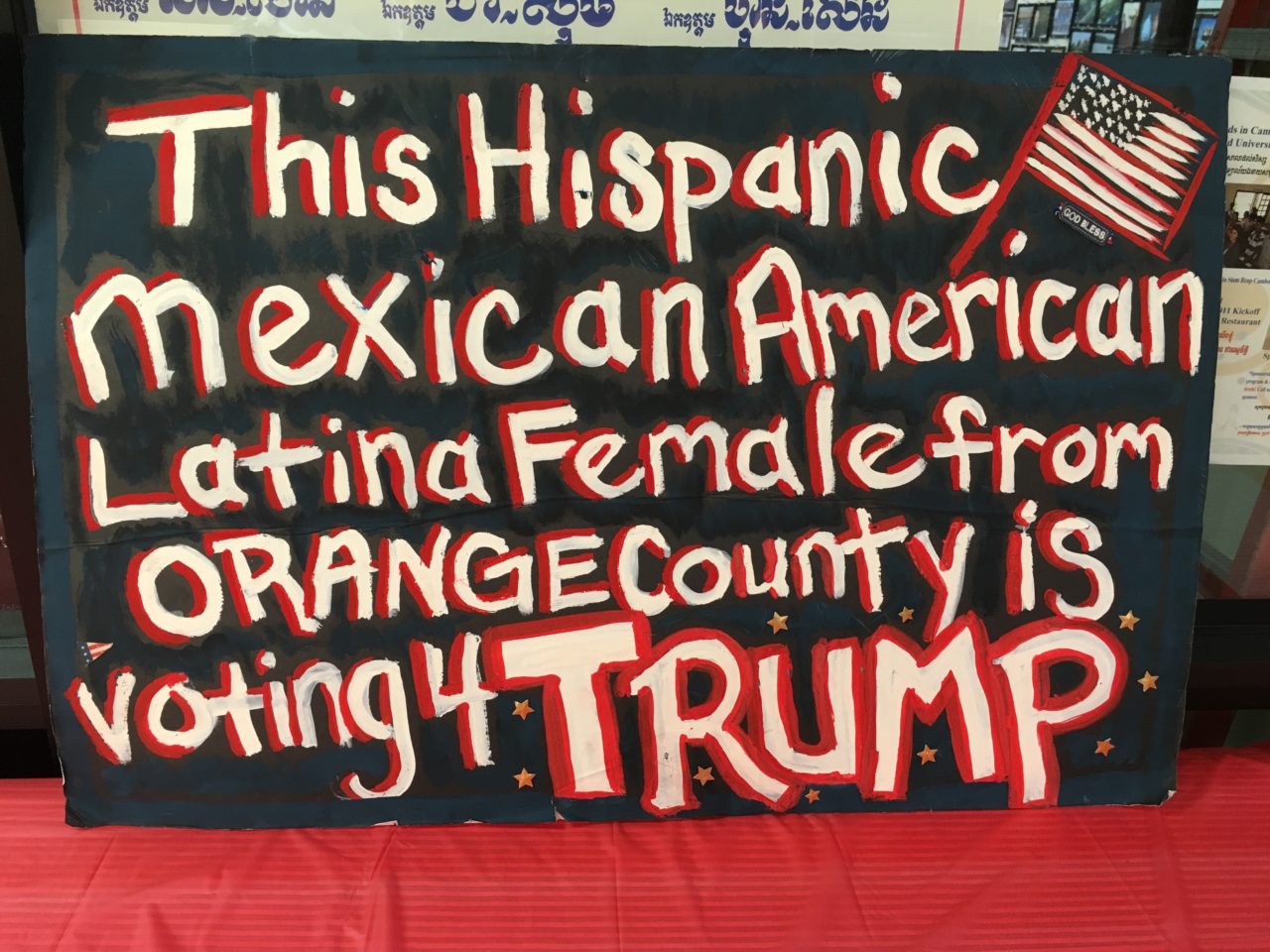 Several people expressed their feelings of ease knowing they could more comfortably express their support for Trump in a deeply blue state, thanks to his campaign’s growing presence.

“It may be unique the Bay Area here but one of the concerns people have up here is putting bumper stickers on their cars because there’s a lot of vandalism to these vehicles,” Cordova said. The problem is not unique to Northern California. Stephen Saletros of Los Angeles agreed. “Many Trump supporters are telling me that they are afraid to put signs on the front of their buildings for fear of vandalism and also to put bumper stickers on their cars for fear of vandalism,” Saletros said. “So it’s inhibiting the public expression of Trump support, but some people are still doing it, and a lot of people are reluctant and for understandable reasons.” 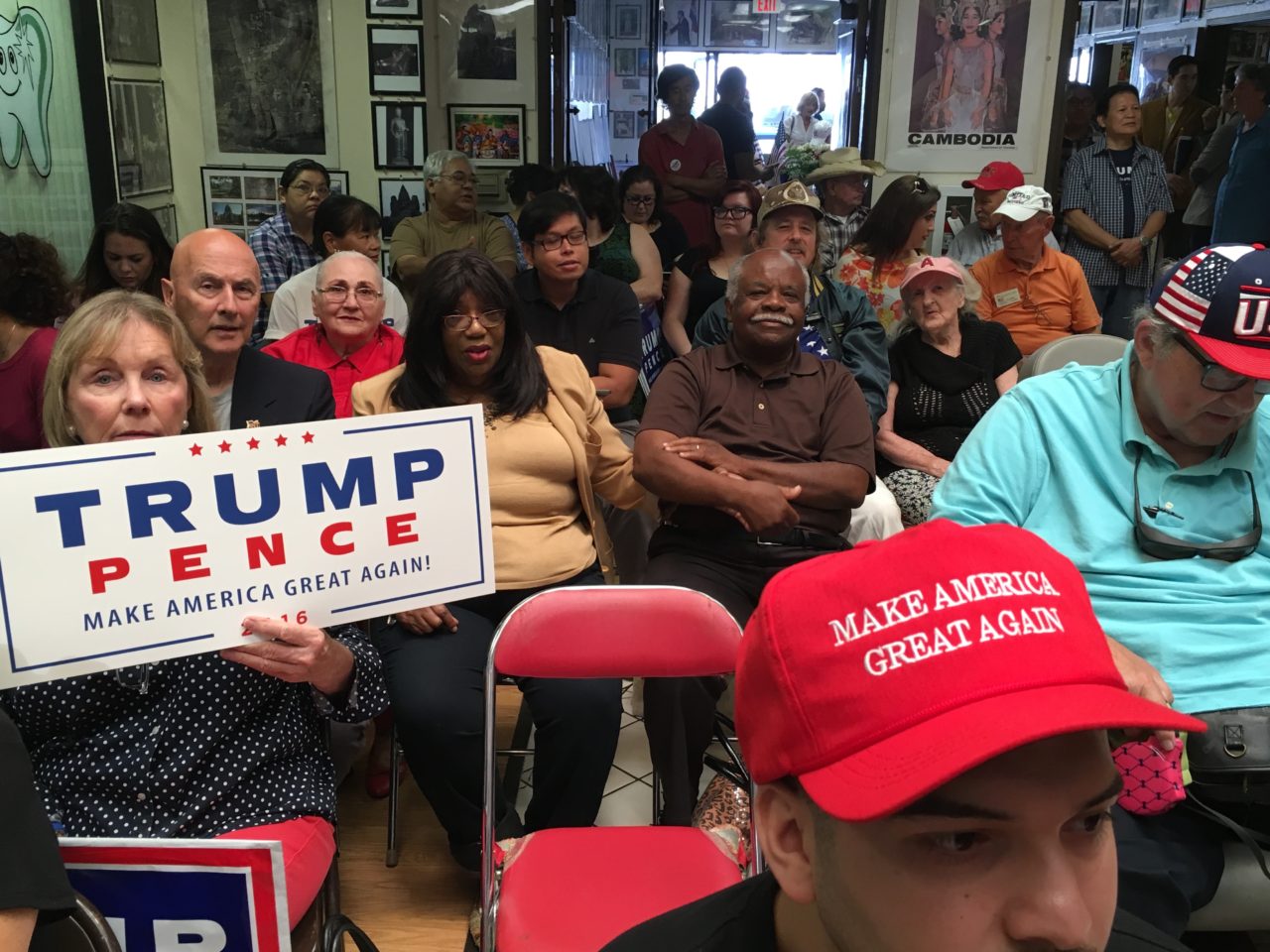 M.C. Campbell, an African-American female who has a blog talk radio program, told Breitbart News she believes Trump is the person to bring the African-American and Latino vote to the GOP. “I believe Donald Trump is the one to do it,” Campbell said. “He was the very first and only Republican candidate that has openly invited the black community in and telling the black community what he will do. And that is something totally different than what the Republican Party has done in the past.”

She added, “I came from a Democratic family. My dad said, ‘I was born a Democrat and I’ll die a Democrat.’ So that was the ruling mantra in the family until I got old enough to know better and educated myself and said ‘Wait a minute. The Republican Party is more of what I think.'”

Her husband, Gene Campbell, who is also a Republican, told Breitbart News:

It’s tradition that is the enemy to blacks. Because, traditionally, we thought Democrats were for blacks without doing any research. And then when I found out that Abraham Lincoln was Republican, I thought ‘Wait. This don’t make sense. If he was Republican, where did the switch come?’ And the switch came somewhere around the ’60s. And most of the blacks that are Democrats still are Democrats because of tradition, not politics. So I’m hoping that will change.

Campbell served in the Vietnam War, noting “as a military person, I can’t go Democrat.”