TEL AVIV – Tel Aviv was rocked Friday by an apparent shooting attack in which two people were killed and at least seven were wounded.

The shooting attack took place at a central Tel Aviv pub on bustling Dizengoff Street, one of the most popular thoroughfares in the city. The moments just before the shooter opened fire can be seen below:

CCTV images of the moments when the Tel Aviv shooter calmly places his bag in a shopping basket and starts shooting pic.twitter.com/XWISwT7CeV

Police detained a suspect near the site of the shooting and reportedly continue to search the area.

Israeli security officials told Breitbart Jerusalem the initial estimation is that the shooter was most likely a trained militant and not a Palestinian civilian motivated by incitement. 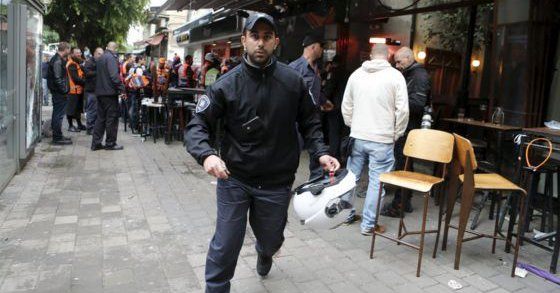 A security guard rushes to clear the area immediately after the attack.

The estimation comes in part from eye witness descriptions of a calm assailant who seemed to have had an escape plan in place.

Eyewitnesses spoke to the Israeli media about there being only one shooter. One witness described the assailant as “light-skinned and not Eastern looking,” carrying an M-16.

Two of today’s victims were killed, while four are in serious condition and three are described as being in moderate condition.

Shani Mizrachi, a paramedic for Magen David Adom, told the Jerusalem Post that “there was a huge crowd when I got to the scene. Some of the wounded were inside the pub and others lying in the street. I immediately began to assist a man of about 35 who had bullet wounds in his upper body. He was fully conscious. I gave him first aid and he was evacuated in a serious condition to the hospital.”