The elite corps of Vatican Swiss Guards, who watch over the safety of the Pope, are conducting their first pilgrimage to the Holy Land since the creation of the guard in the 16th century.

On Thursday, a first contingent of twelve Swiss guards arrived in Jerusalem, and over the next two months, nine more groups of twelve guards each will make the trip until the entire corps of 120 soldiers has been able to make the pilgrimage.

“When the Pope travels, commanders usually accompany him, but the guards have never made a pilgrimage to the Holy Land,” said Father Juan María Solana of the Notre Dame Institute that is hosting the Guard in Jerusalem.

Pope Julius II created the Pontifical Swiss Guard in 1506, inviting a group of Helvetian soldiers to Rome to act as his personal security detail.

The most famous battle fought by the Guard occurred in 1527, when the troops of Holy Roman Emperor Charles V sacked Rome and massacred nearly the entire Guard on the steps of the high altar in Saint Peter’s Basilica. Despite the enormous numerical disadvantage, the Swiss soldiers stood their ground until they were all cut down.

Of the 189 Swiss Guards, only 42 survived, but these few managed to secure Pope Clement VII’s retreat to safety in the fortress of Castel Sant’Angelo. 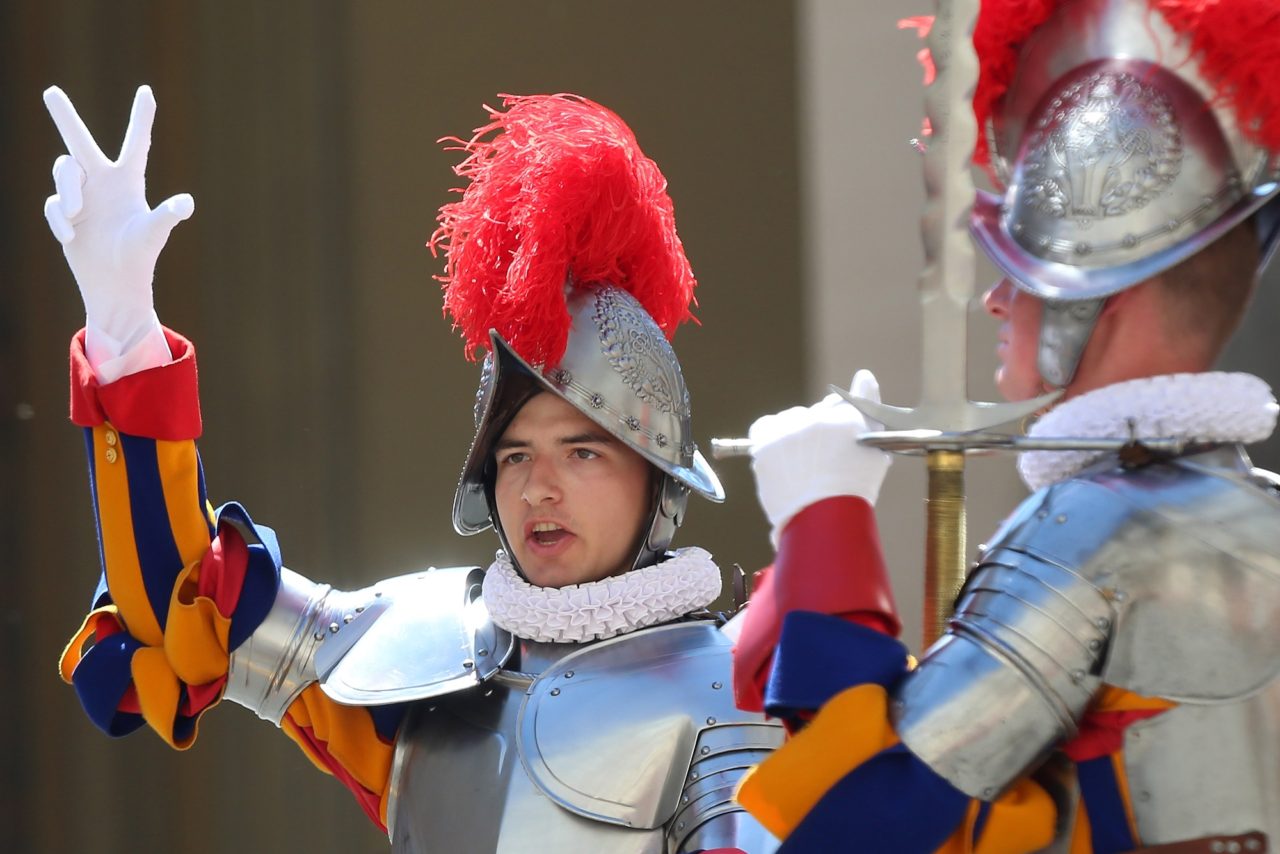 VATICAN CITY, VATICAN – MAY 06: A new recruit raises three fingers in the sign of the trinity at a swearing in ceremony for the Vatican’s elite Swiss Guard at the Cortile di San Damaso on May 6, 2014 in Vatican City, Vatican. The swearing in ceremony is held on May 6 every year to commemorate the 147 halberdiers who died defending the pope in 1527. (Photo by Franco Origlia/Getty Images)

Today, members of the Swiss Guard must be Swiss citizens, Roman Catholic, unmarried, and at least 5 feet 8 inches tall.

Each member of the Guard takes an oath to “faithfully, loyally and honorably serve the Supreme Pontiff” and his legitimate successors, “sacrificing my life if necessary to defend them.”

Their iconic uniforms, designed by none other than Michelangelo, have made the guard one of the most photographed groups in the world.

During their Holy Land pilgrimage, which has been described as eminently “spiritual,” the Guard will visit the holy sites in Jerusalem and travel north to the Sea of Galilee and the places where Jesus spent much of his life. They will also attend conferences and workshops on Christian formation.