Wealthy Jews are trying to take over the world and they are using the power of celebrity and fame in Hollywood to achieve their nefarious end, a Saudi scholar has claimed.

Sheikh Sa’ad ibn Abdullah Al-Humayd, a professor of Hadith Studies at King Saud University in Riyadh, made his accusation while being interviewed on Saudi television.

He blamed Jews for implementing the contents of The Protocols of the Elders of Zion by harnessing Hollywood to “target us” and preoccupy the masses with arts, sports and theater via celebrities with Hollywood fixations.

While stressing that there is no proof of the authenticity of the notorious anti-Semitic forgery, Sheikh Sa’ad ibn Abdullah Al-Humayd, said this didn’t matter since to his mind the discredited book matches “reality.”

“Some people question the authenticity The Protocols of the Elders of Zion, and indeed, we have some questions about this book,” he said in an interview with the Saudi Wesal TV channel. The interview, which aired on March 21, was translated by the Middle East Media Research Institute. 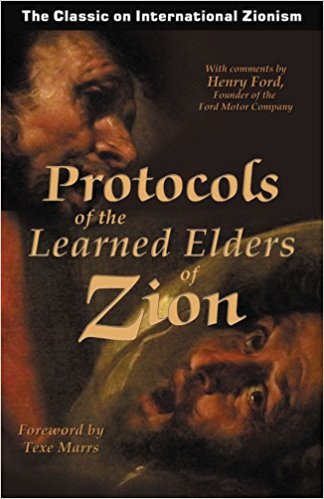 “It’s not clear how the news about so secret an organization can spread everywhere, especially since these people hold such power, as we all know,” added the sheikh. “However, if we look at reality, we see that what appears in this book is implemented.”

The Protocols of the Meetings of the Learned Elders of Zion is an antisemitic, entirely fabricated text purporting to describe a Jewish plan for global domination. The forgery was first published in Russia in 1903, translated into multiple languages, and disseminated internationally in the early part of the 20th century.

It has been in publication ever since.

According to the claims made by some of its publishers, the Protocols are the minutes of a late 19th-century meeting where Jewish leaders discussed their goal of global Jewish hegemony by subverting the morals of Gentiles, and by controlling the press and the world’s economies by subterfuge.

“Is it, in fact, possible that these Jews wrote this book, and intentionally spread the news about it, in order to weaken the resolve of the people?” asked the scholar. “Is it possible that they had studied the psychological effect that might be caused by reading such a book, and reached the conclusion that this psychological effect would serve them well? It’s possible. Only Allah knows. At any rate, we do not have proof for the authenticity of The Protocols, except for what exists in reality.”

“If we consider Hollywood, for example, and look at the films it produces, and at the feverish competition meant to preoccupy the people with the arts, with sports, with theater, and with films, and to aggrandize those insignificant people, such as actors, male and female dancers, sportsmen and sportswomen… This includes bringing women into games which they cannot perform, but into which they have been cast. It includes the arts, in all its diverse forms. They drown the people in such an atmosphere,” Al-Humayd continued.

The claim that the world is controlled by Jews is not new, nor does it ever go away.

In it, Mr. White warns everyone about the Jews and their ability to control the climate as a means to create natural disasters that in turn allow them to own the cities.

“Man, it just started snowing out of nowhere this morning, man. Y’all better pay attention to this climate control, man, this climate manipulation,” White warns. “And D.C. keep talking about, ‘We a resilient city.’ And that’s a model based off the Rothschilds controlling the climate to create natural disasters they can pay for to own the cities, man. Be careful.”

As Breitbart news reported, Mr.White has since apologized.