JERUSALEM, Israel — Thousands of Ethiopian Jews gathered at the national cemetery on Mount Herzl at midday Sunday to remember those members of their community who perished on the way to Israel.

Ethiopian Jews, who had been relatively isolated for centuries, began migrating to Israel in the 1980s, during years of political unrest and famine in Ethiopia. Many walked across hostile territory and desert in the Sudan before being rescued by Israel in a series of airlifts that brought them to the land that they, like Jews throughout the world, had kept at the center of their prayers for generations.

The Ethiopian Jewish community preserved the Torah — the first five books of the Bible — but were disconnected from rabbinic Judaism, including the oral traditions codified in the Talmud and other texts. Religious authorities in Israel determined that they were authentic Jews and were welcomed as Israelis. There have been several subsequent waves of Ethiopian immigration over the past three decades.

Goa Tala of Beersheva, Israel, told Breitbart News that she had left Ethiopia in 1982, and that she had lost her sister along the way during their trek across the Sudan. 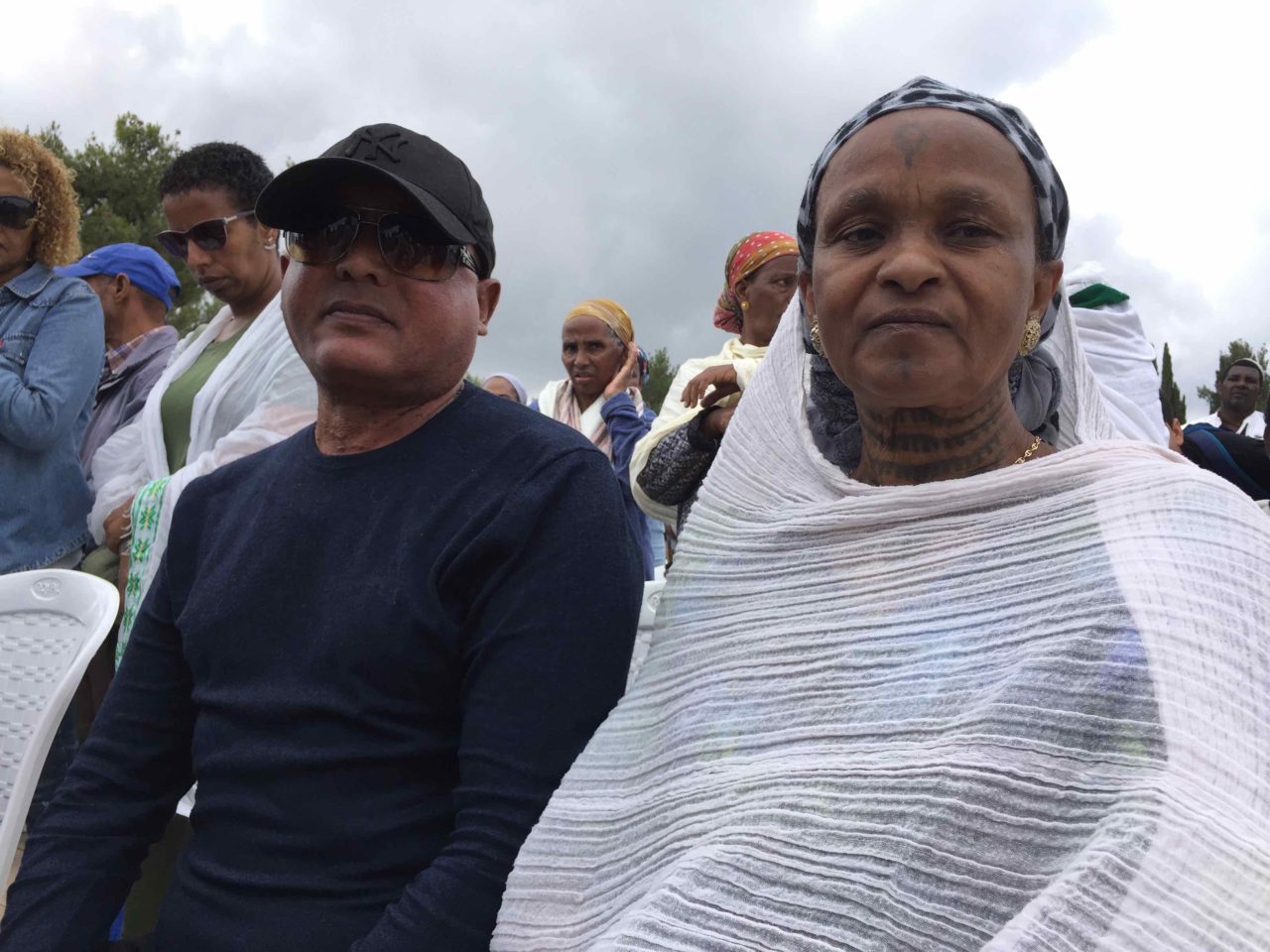 Seated next to her brother, Bayo Bazah, she recalled that she had come to Jerusalem because “Jerusalem is in our heart.” Bazah said that the memory of their sister had never left them.

Though life is hard for many Ethiopian Jews, many of whom live in poorer rural towns, the younger generation has gained access to undreamed-of opportunities, often serving in the military with distinction and attending Israeli universities. As in many societies, informal racial discrimination has also been a challenge, though it is one that they, together with Israelis from other backgrounds, are working to overcome.

The memorial included speeches and songs in Hebrew and Amharic, as well as prayers in Hebrew and in Ge’ez, the traditional sacred language of Ethiopian Jews. 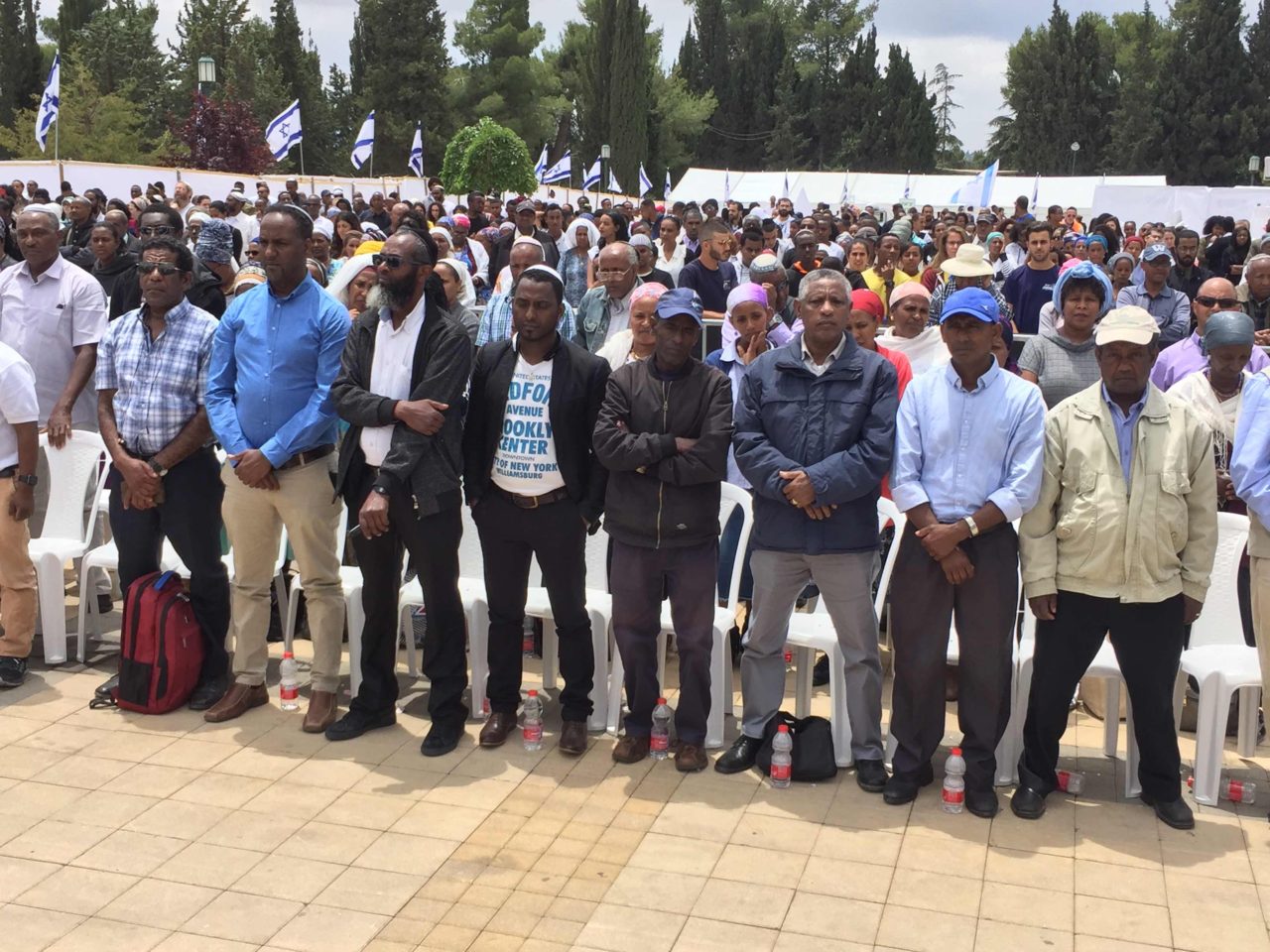 One woman, Inbal Chakola, recalled her journey as a teenager — being robbed along the way; suffering from illness and thirst; and losing two sisters. She was told, she said, not to cry.

“We were afraid that our whole family would die,” she said.

Eventually, the family was brought to Israel, where her father never lived to see his two daughters memorialized on Mount Herzl: he was killed in a Palestinian terror attack, falling along with other Israelis.

The entire senior leadership of Israel attended Sunday’s ceremony, which fell on the same day as Yom Yerushalayim (“Jerusalem Day”), the anniversary of the reunification of Jerusalem in the Six Day War, 51 years ago. President Reuven Rivlin, Prime Minister Benjamin Netanyahu, and Supreme Court Justice George Karra — a Christian Arab — were in attendance to pay their respects, together with Leaders of the Opposition Isaac Herzog, Mayor of Jerusalem Nir Barkat, military leaders, and other officials.

President Reuvin Rivlin praised the courage and heroism of those who undertook the dangerous journey to Israel, and who continued even after losing loved ones along the way.

He recalled his recent official visit to Ethiopia, where he said he learned about the deep relationship between the two nations, and the deep conviction of the community that had practiced its faith of so long despite their geographic isolation.

“You lived in the horn of Africa, and you prayed … for redemption,” Prime Minister Netanyahu told the gathering. 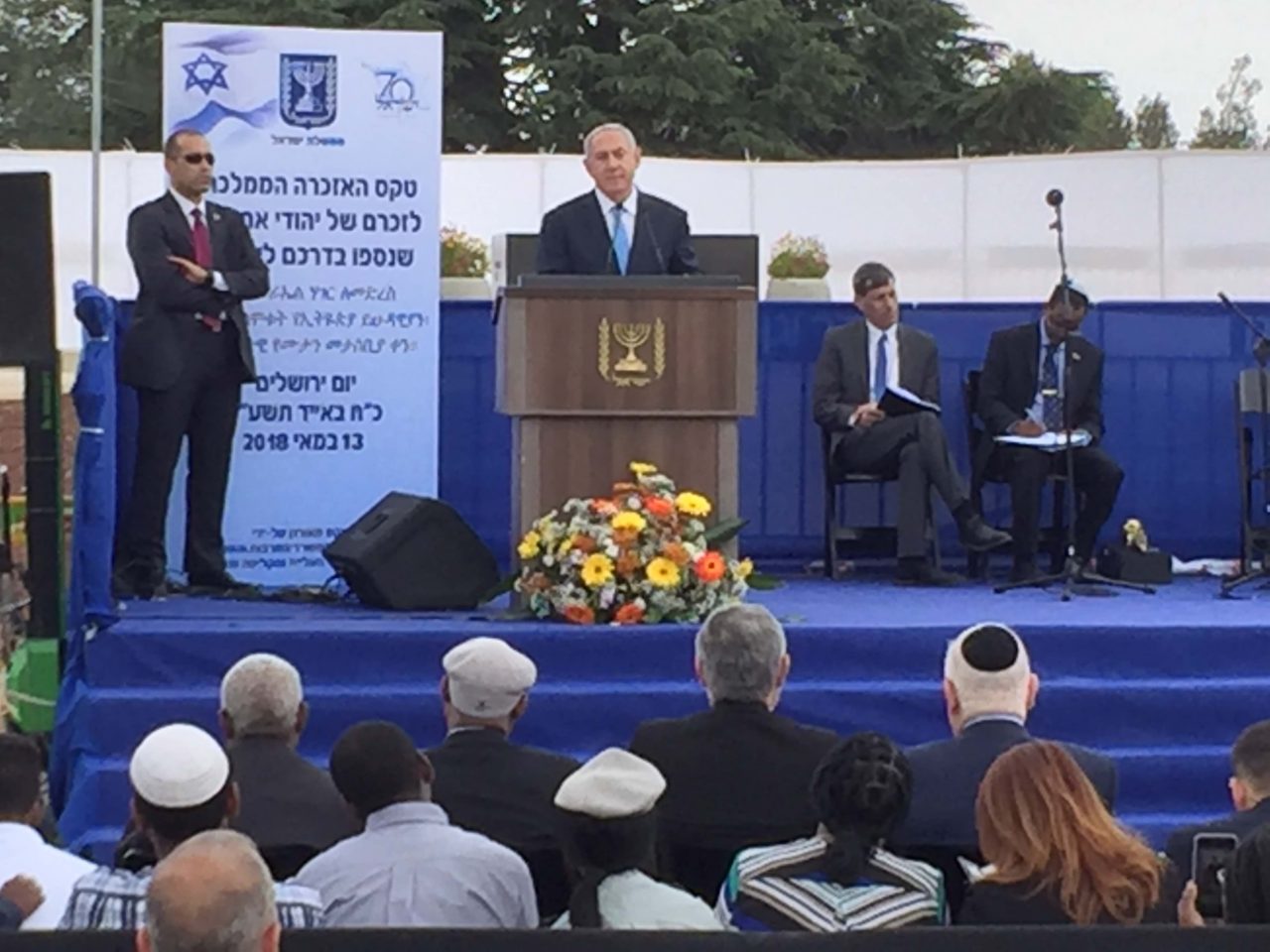 He compared the journey from Ethiopia to the Biblical Exodus of the Jews from Egypt, describing the hardships and persecution the community endured along the way, and the dying wishes of those who perished that those who continued would one day glimpse Jerusalem.

“The entire nation of Israel can learn so much from you,” he said.

“We are as one person, with one heart.”

He acknowledged that there were still problems in absorbing the community into Israel society, but pledged to continue working to solve them, and to ensure equality among all citizens of Israel.

He also pledged to work to secure the release of Avera Mengistu, an Ethiopian Israeli who is currently being held by the Hamas terrorist group in Gaza.

Netanyahu honored the achievements of the Ethiopian community and its contributions to Israeli society. “When I see the [Ethiopian] military officers, and the doctors who go to the entire world to save people — what an honor,” he said, referring to Israel’s many humanitarian missions worldwide.

He closed with a traditional blessing for the deceased: “May their memory be a blessing.”

“Hatikvah” at memorial for Ethiopian Jews: https://t.co/S4D5nax7Sw via @YouTube