The George Soros-financed New Israel Fund (NIF), a radical, foreign-funded anti-Israel NGO, is facing scrutiny in Israel over its reported promotion of organized opposition to Israel’s recent passage of the nation-state law.

The law officially calls Israel the “historical homeland of the Jewish people,” but does not change the country’s other Basic Law, which provides equal rights to all citizens.

Elements of Israel’s historically patriotic Druze community have organized opposition to the law, culminating in a protest in Tel Aviv’s Rabin Square on Saturday in which tens of thousands of people, waiving Israeli and Druze flags, expressed opposition to the nation-state law. It was not immediately clear how many of those in attendance were actually Druze, while leaders of the Druze community were among the protest organizers and speakers. 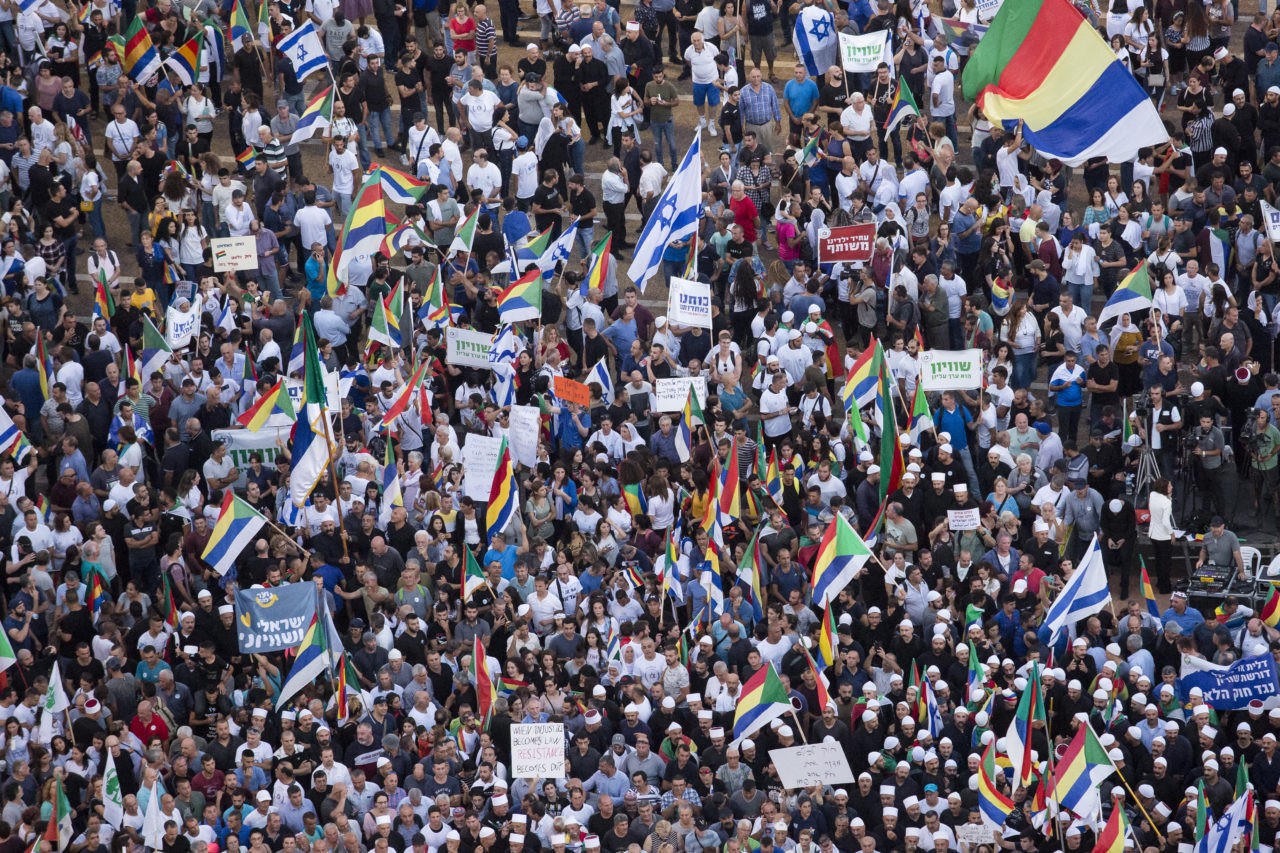 TEL AVIV, ISRAEL  A general view shows thousands participents during a protest against ‘Jewish State Nation Law’ in Rabin Square on August 4, 2018 in Tel Aviv, Israel. The rally organized by Druze community members is in protest of the law that declares Israel the exclusive homeland of Jewish people. (Amir Levy/Getty Images)

Alleged NIF ties to the mass protest were fueled in part after Prime Minister Benjamin Netanyahu shared an article on Facebook reporting on NIF’s alleged connections to the Tel Aviv rally.

The report, from Israel’s Mida magazine, documented the Forum Against the Nation-state Law, which organized the Rabin Square protest, is purportedly sponsored by the leftist Anu group, which in turn is listed as a grantee of the NIF.

The Times of Israel reported on the response from Anu and the NIF:

On response Friday, NIF president Mikey Gitzin slammed Mida as a site “that is based on lies and is a tool for Netanyahu.” He said that while the NIF has shared a platform with Anu in the past, and both organizations support the Druze campaign against the law, it did not prove they were financing the campaign.

The NIF has vocally opposed the nation-state legislation.

Reacting to the passage of the nation-state law, Daniel Sokatch, CEO of the New Israel Fund, issued a divisive statement calling the legislation “tribalism at its worst,” a “slap in the face to Arab Palestinian citizens of Israel,” and “danger to Israel’s future.”

Sokatch vowed the NIF and its grantees would fight: “This law is a danger to Israel’s future. And no matter what extremist politicians do, the New Israel Fund and our grantees will stand up for the democratic, equitable, and shared society all Israelis deserve.”

Sokatch, writing on the NIF’s website, used the nation-state law to rally supporters.

In a piece titled, “What’s Next After the Nation-State Law,” Sokatch called for resistance:

To those who are new to this fight, and to all of us, I say: we need you. And it’s not too late. But the time for hand-wringing, frustration, and despair is over. It is not enough. Resisting neo-authoritarianism in Israel, in the US, and around the world is the great task of our time. And make no mistake: nobody is riding to our rescue. We are going to have to do the hard work ourselves.

Hacked emails document Soros’ Open Society Foundations provided the NIF with at least $837,500 from 2002 to 2015. Breitbart News found that NIF’s 2015 annual report lists the Tides Foundation as a donor. Tides is a far-left financing clearinghouse that itself is heavily funded by Soros’ Open Society nonprofit.

The nation-state law, meanwhile, calls Israel “the national home of the Jewish people, in which it fulfills its natural, cultural, religious and historical right to self-determination.”