(AP) ROSH HANIKRA, Israel –  Israel is building a massive wall along its northern border, saying the barrier is needed to protect civilians from Hezbollah attacks, but the project has raised tensions with Lebanon, which fears the fence will encroach on its territory.

The Israeli military insists the entire barrier is being constructed in Israeli territory, and the U.N. peacekeeping force in the area agrees. But Hezbollah has never fully accepted the border, and a senior Israeli military official stressed the need for the wall, saying that while Israeli intelligence closely monitors the militant group, “we are prepared for the possibility that they will surprise us.”

The official spoke on condition of anonymity under military guidelines during a military-led tour of the border region provided for reporters.

Israel’s military conducted a large-scale combined arms drill in northern Israel this week simulating a future conflict with Hezbollah, with which it fought a monthlong war in 2006. Israelis fear there could be a renewal of hostilities as the civil war winds down in neighboring Syria, where the Iran-backed militant group has been fighting alongside President Bashar Assad’s forces for the last seven years.

Hezbollah, which is considered a terrorist group by the U.S. and Israel, is believed to have an even larger and more sophisticated arsenal of rockets than in 2006, when it fought Israel’s vaunted military to a stalemate in southern Lebanon. That war began with a deadly cross-border raid in which Hezbollah killed eight Israeli soldiers and abducted two others, whose remains were returned to Israel in a prisoner exchange two years later. 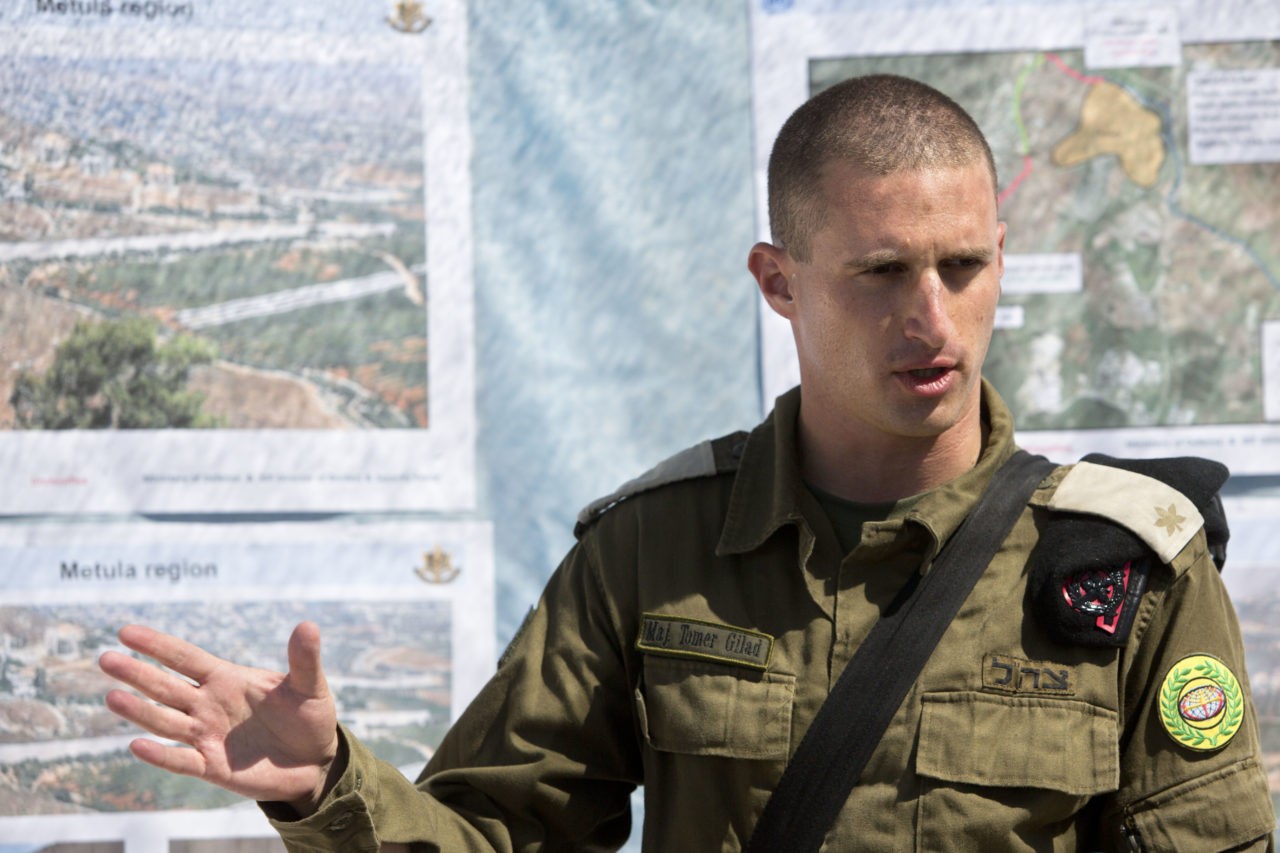 Maj. Tomer Gilad Israel’s liaison officer with UNIFIL, the United Nations’ peacekeeping force in southern Lebanon speaks during a press conference near a wall at the Israel Lebanon border near Rosh Haniqra, northern Israel, Israel is building a massive wall along its northern border, saying the barrier is needed to protect civilians from Hezbollah attacks. (AP Photo/Sebastian Scheiner)

Brig. Gen. Eran Ofir, the commander in charge of Israel’s border wall projects, said around seven miles of the 80-mile (130-kilometer) barrier has been built. The $450 million project is slated for completion in two years. Most of the barrier is a concrete wall topped by steel mesh, sensors and surveillance cameras. Steel fencing replaces the concrete wall in especially rugged areas.

Earthmovers and other large machinery rumbled alongside a completed section of the 30-foot (9-meter) high concrete wall earlier this week near the Mediterranean coast. Lebanese soldiers looked over the barrier from a guard post on the opposite side of the Blue Line, which was demarcated by the U.N. after Israeli forces withdrew from south Lebanon in 2000 following an 18-year military occupation. The two countries technically remain at war.

The U.N. Security Council warned last month that violations of the cease-fire agreement between Lebanon and Israel could lead to fresh conflict, and Lebanon’s top security body earlier this year described the planned border wall as an “aggression” against its sovereignty.

“This wall, if it is built, will be considered an aggression against Lebanon,” it said in a statement. “The Higher Defense Council has given instructions to confront this aggression to prevent Israel from building this so-called wall barrier on Lebanese territory,” it added.

Maj. Tomer Gilad, Israel’s liaison officer with UNIFIL, said there are monthly meetings with the Lebanese military and U.N. officials to coordinate the barrier’s construction.

“Even for the past year before we started this construction, we’ve coordinated this activity with UNIFIL, and through UNIFIL with the Lebanese Armed Forces. We’ve alerted them of our intention to do so, to construct this defensive mechanism,” Gilad told reporters.

UNIFIL spokesman Andrea Tenenti said that since construction began in February 2018, everything has been built south of the Blue Line and away from sensitive areas. 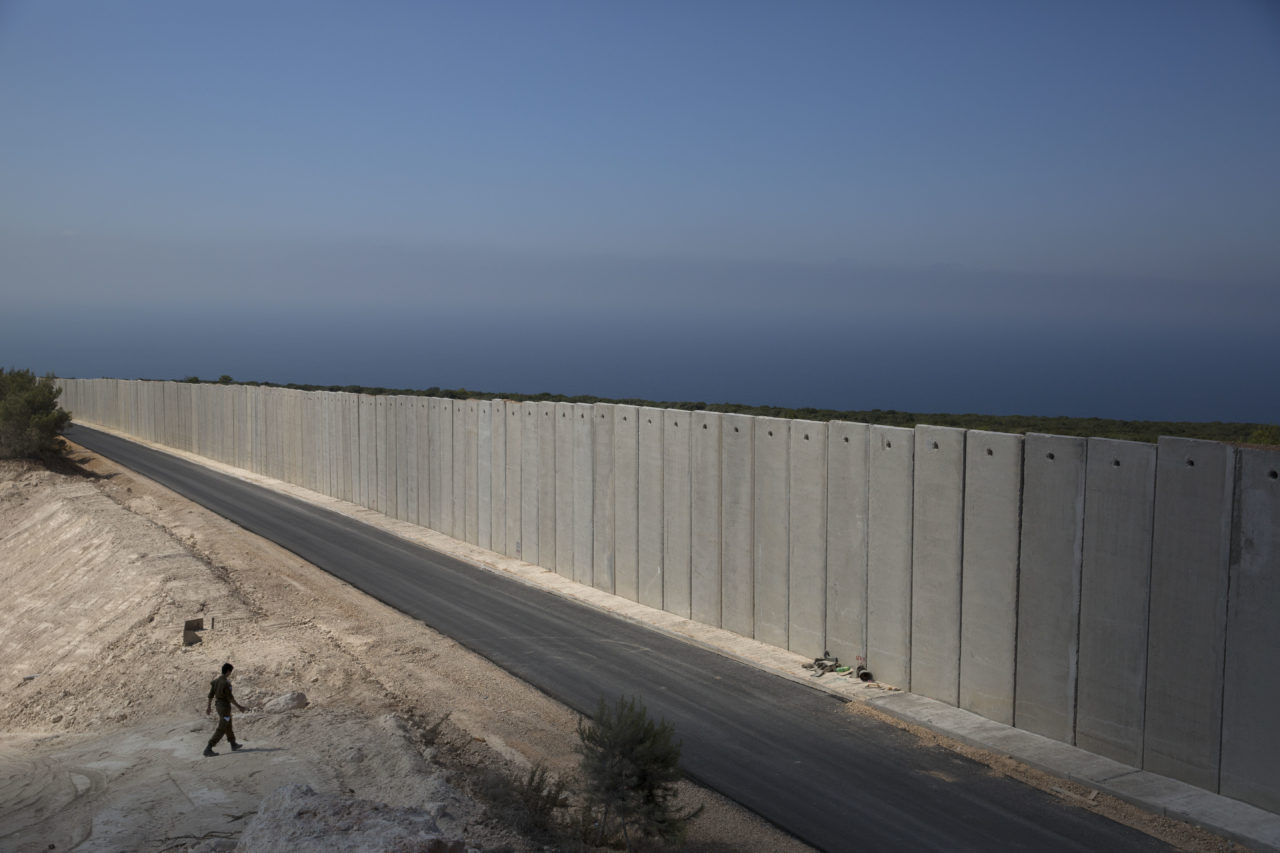 An Israeli soldier stands near a wall at the Israel Lebanon border near Rosh Haniqra, northern Israel, Israel is building a massive wall along its northern border, saying the barrier is needed to protect civilians from Hezbollah attacks.  (AP Photo/Sebastian Scheiner)

Israel says the barrier’s purpose is to defend Israeli communities from Hezbollah, pointing to sporadic cross-border attacks on Israeli troops and civilians in recent years. The volatile border between the two countries has been relatively quiet since the 2006 war, with few major cross-border attacks or incidents.

Israel warplanes, however, regularly violate Lebanese airspace, including to carry out airstrikes in neighboring Syria.

In 2010, an Israeli army officer was killed and another was seriously wounded when Israeli troops came under fire by Lebanese army forces while trimming trees on the Israeli side of the border. Three Lebanese soldiers and a Lebanese journalist were killed in Israeli retaliatory shelling. In 2013, an Israeli soldier was killed by a Lebanese army sniper while driving along the border, and in 2015 Hezbollah fired an anti-tank missile at an Israeli military convoy, killing two soldiers and wounding seven.

The Israeli official who spoke on condition of anonymity said the army has noticed a troubling rise in “very close cooperation between Lebanese Army Forces and Hezbollah” near the Israeli frontier in the past year. He says the military expects even more Hezbollah fighters to arrive in the area after the Syrian war ends.