MOUNT SODOM, ISRAEL (AP) — Israeli researchers said Thursday they have surveyed what they now believe to be the world’s longest salt cave, a network of twisting passageways at the southern tip of the Dead Sea.

A recently completed survey of the Malham Cave determined the labyrinthine cavern stretches more than 10 kilometers (6 miles) in length. That puts it well ahead of Iran’s Namakdan Cave, previously thought to be the longest salt cave.

The survey was conducted by the Hebrew University of Jerusalem and a collection of Israeli, Bulgarian and international volunteers.

Boaz Langford, a researcher at the university’s Caves Research Center, and Antoniya Vlaykova, a Bulgarian cave explorer from the European Speleological Federation, headed the expedition.

“What’s unique about this cave, as opposed to other salt caves in the world, is that it’s the longest in the world,” Langford said, resting in a chamber of the cave dubbed the “Wedding Hall” for its salt stalactites.

Langford and Vlaykova said they plan to publish the complete map of the cave in a professional publication in the coming months. 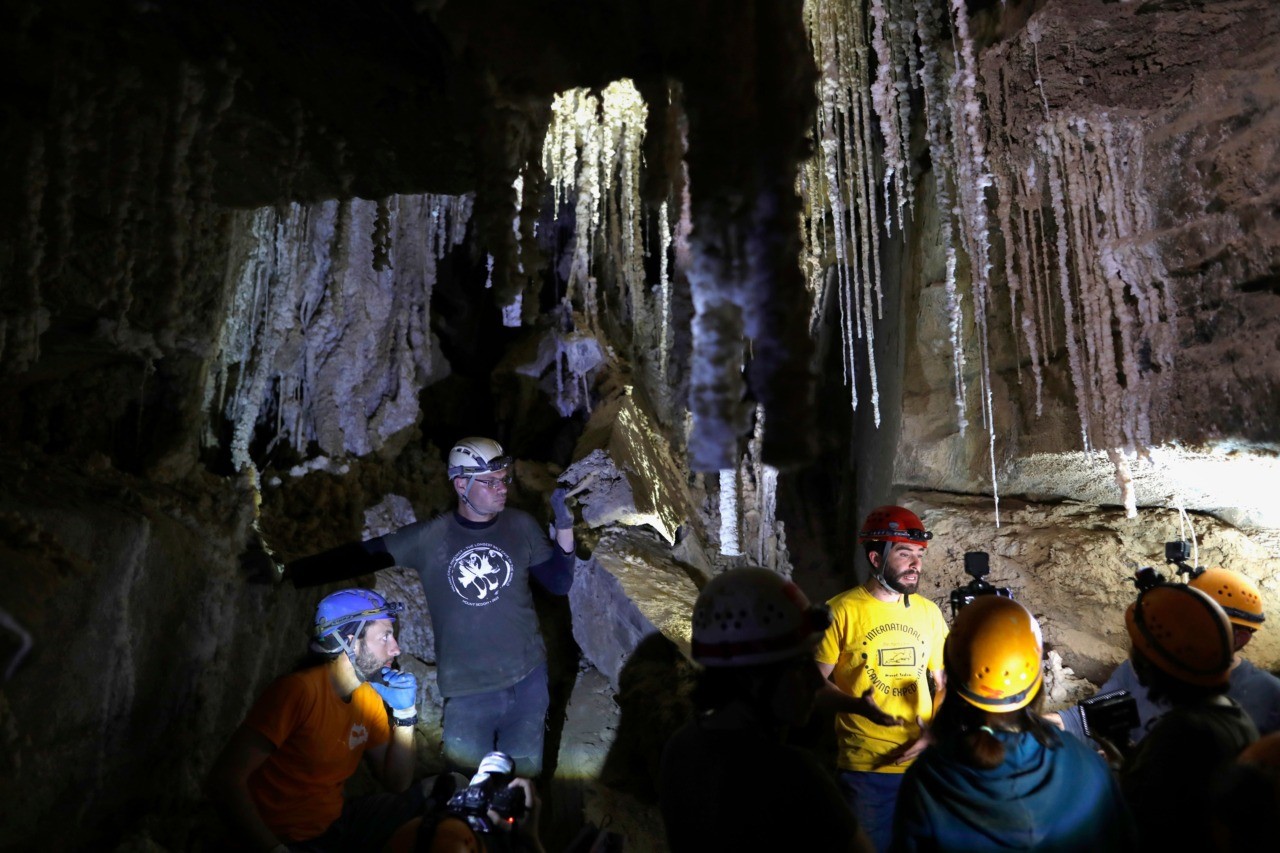 There is no official record for the longest salt cave, and such designations are generally decided by consensus among cave researchers after an underground chamber is mapped and published.

Namakdan, which is about 6 kilometers (4 miles) in length, was identified as the longest salt cave after a study by Czech and Iranian scientists in 2006.

Salt caves are unusual and rare geological features. Because salt is highly water soluble, large salt deposits do not normally survive long on the surface. Only a handful of salt caves are larger than a kilometer (half a mile) in length. Salt caves tend to only exist in highly arid regions, like the area around the Dead Sea, which is located at the lowest point on earth and is too salty to support animal life.

The Dead Sea and Mount Sodom were formed by tectonic activity, the shifting of the Earth’s plates at the northern end of the 6,000-kilometer (4,000-mile) Afro-Arabian Rift Valley. Over millions of years, successive flooding of the deep depression lay down thick layers of salt.

“The salt layers are squeezed out from the sub-surface, where they are deposited a few kilometers underground, and while being squeezed out they form a mountain, which is rising still today, at a rate of about one centimeter per year,” said Amos Frumkin, a Hebrew University geologist who has studied the cave for decades. 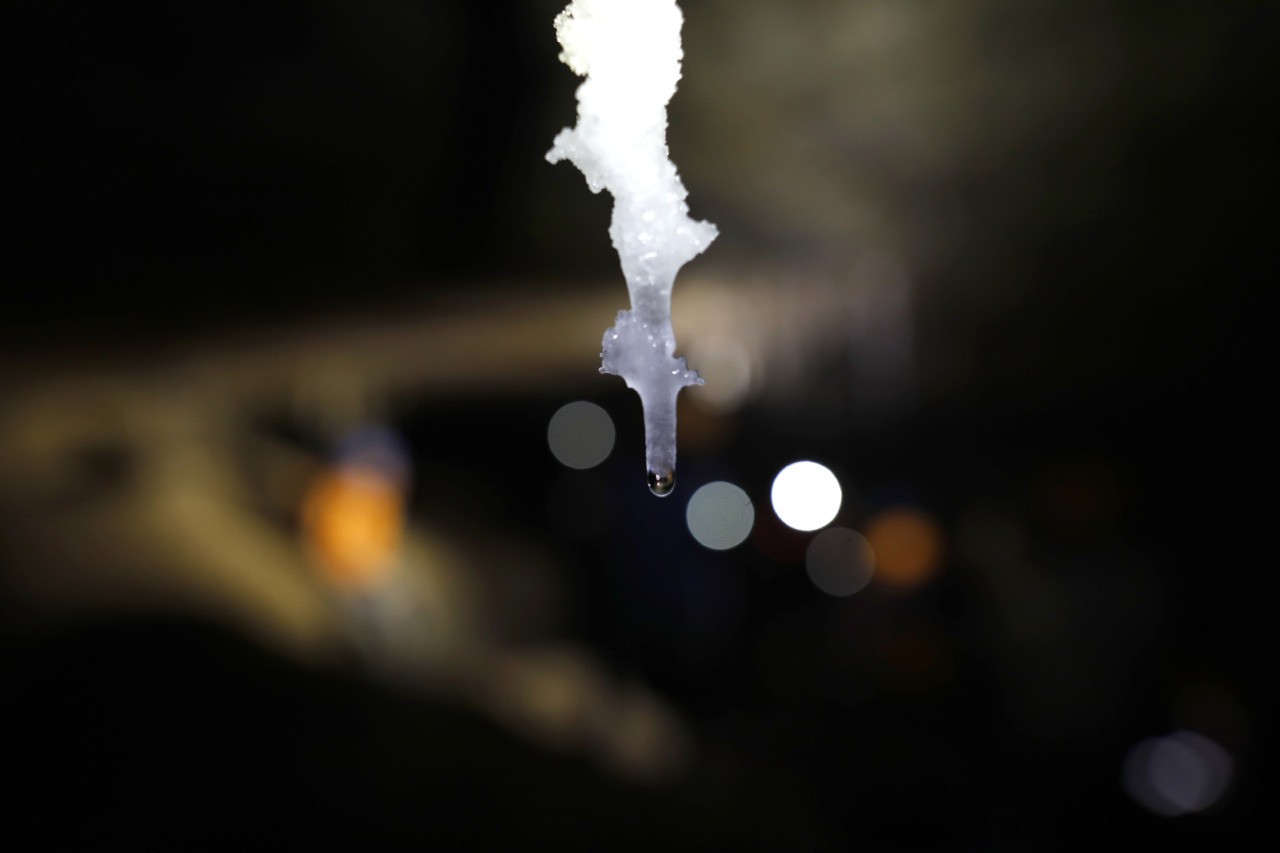 This picture taken on March 27, 2019 shows a drop of water dripping from a salt stalactite in the Malham cave inside Mount Sodom, located at the southern part of the Dead Sea in Israel. – Israeli spelunkers announced on March 27 that a salt cave near the Dead Sea was over ten kilometres long, beating Iran’s N3 cave in Qeshm to make it the world’s largest. The cave, named Malham, is a series of canyons running through Mount Sodom, Israel’s largest mountain, and spilling out to the southwest corner of the adjacent Dead Sea. (MENAHEM KAHANA/AFP/Getty Images)

The Malham Cave’s main outlet yawns not far from a salt pillar named “Lot’s wife,” after the biblical character who was petrified for looking back at the destruction of the cities of Sodom and Gomorrah. On the mountainside above, Langford, Vlaykova and their colleagues have identified at least 19 openings where seasonal floods have percolated through Mount Sodom’s rock salt to form the cave.

Yoav Negev, founder of the Israeli Cave Explorers Club, said that over two years, his group and a total of 80 volunteers from nine countries spent around 1,500 workdays measuring and mapping the cavern’s recesses.

“It’s above and beyond what we expected,” he said.

Efraim Cohen, one of the Hebrew University cave explorers, described the process of locating the cave’s entrances from the surface, rappelling down into surface shafts, squeezing through tight passages, and measuring each of the cavern’s serpentine branches with lasers.

Despite the difficult environment, he said the cave’s splendor makes it worth it. 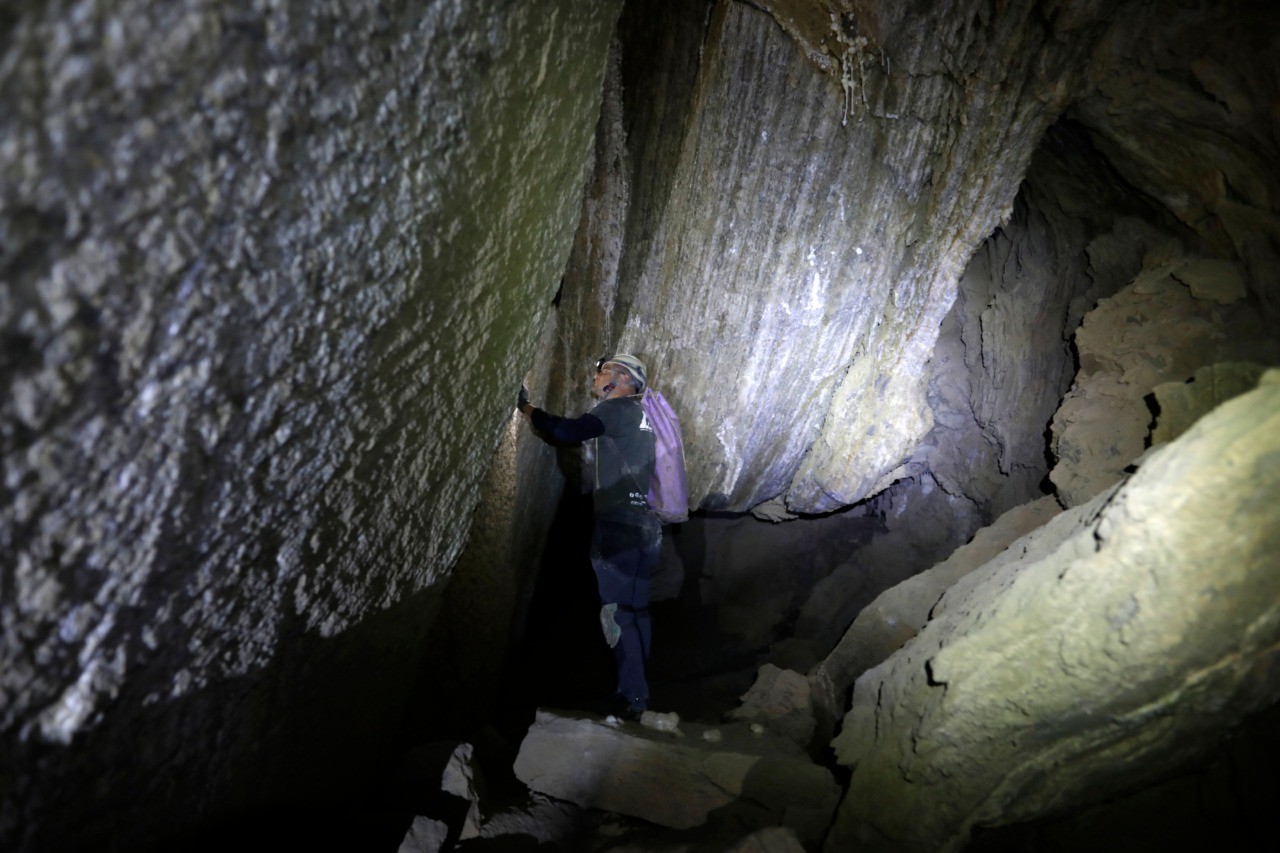 A journalist walks in the Malham cave inside Mount Sodom, located at the southern part of the Dead Sea in Israel on March 27, 2019. – Israeli spelunkers announced on March 27 that a salt cave near the Dead Sea was over ten kilometres long, beating Iran’s N3 cave in Qeshm to make it the world’s largest. The cave, named Malham, is a series of canyons running through Mount Sodom, Israel’s largest mountain, and spilling out to the southwest corner of the adjacent Dead Sea. (MENAHEM KAHANA/AFP/Getty Images)

Radiocarbon dating of wood fragments found inside the cave have helped date its formation to around 7,000 years ago, making it extremely young by speleological standards.

“The reason why it’s so young is because it’s made of salt,” Frumkin explained. “Limestone caves are much slower to form. They are usually much older. But this one is developing very fast so it’s one of the youngest caves in the world.”

Frumkin said that studying the cave’s formation has provided researchers with information about the climate of the region over the past 7,000 years, and how that has affected the emergence of civilization. Jericho, one of world’s first cities and an epicenter for the development of agriculture, is around 80 kilometers (50 miles) north of the Malham Cave.

“Because the salt is so soluble, that means that every change in the climate leaves its mark in the cave,” Frumkin said. “If there is more water, more rainfall, the cave is enlarged, and Dead Sea level changes, and this makes a huge difference in the morphology of the cave.”

Although the scientists have completed their study, there is still more of the cave that is undiscovered, he said.

“There are some more parts, especially upper levels, which have not been surveyed yet because they are difficult to reach,” Frumkin said.