JERUSALEM — Imagine the southern half of the United States being bombarded by missiles for days at a time. Conceptualize the populations of Miami, Los Angeles and Dallas running into bomb shelters as rocket sirens blare. This is the reality here in Israel as I write these words.

For the last three days, more than 600 terror missiles have been indiscriminately fired upon some of Israel’s largest cities. Almost half of Israel’s population is currently inside the line of rocket fire while our capital, Jerusalem, and the economical hub of Tel Aviv could be the next targets. Once the rocket alert system is activated, the people of Israel have only a few seconds to find refuge as Gaza missiles target their cities.

For decades, Israelis have faced rounds of terror like this, occurring at times once in a few years, and more recently, every few months. The Palestinian Islamists in Gaza are routinely committing a double war crime — deliberately aiming their missiles at Israeli civilian targets while hiding behind their own civilians. Many of the Gaza missiles fired toward Israel are launched from mosques, hospital and schools (often UN schools), cynically utilizing the coastal enclave’s population as human shields.

Stunningly, the left in Israel, Europe and America often attempts to excuse the terror from Gaza by claiming that the “root cause” of the mayhem is the poverty and despair of the local population. They ignore that the Palestinian population has received billions in economic and humanitarian aid, surpassing even the amount that Japan received to recover after World War II. Look at Japan and look at Gaza.

The reason the people of Gaza live in poverty is because their terrorist government utilizes the foreign aid that they receive to build their missile infrastructure and construct terror tunnels with the aim of waging war on the Jewish state.

Another claim often propagated by the left is that the terror from Gaza is prompted by the so-called “economic blockade” of the Gaza Strip. This is another myth. There is no such blockade of Gaza. Every day, hundreds of Israeli trucks filled with tons of goods cross the border into Gaza. Israel supplies about two-thirds of Gaza’s electricity as well as its fuel despite those provisions being utilized to power Hamas’s missile factories and terror facilities.

Gaza shares a major border with Egypt, a fellow Arab Muslim state, and Israel has no control over that border. The Israel Defense Forces does enforce a naval blockade of Gaza to ensure that weapons are not imported by sea. This started in 2007, when Hamas took control over Gaza. By the way, Gaza in modern times never had any port that could handle cargo ships; goods were always trucked in from Egypt or Israel.

How did Israel get into such a crazy situation where half of its population is threatened by missiles?

Israel is a tiny country about the size of New Jersey surrounded by an ocean of 22 Arab states and more than 50 Muslim countries. 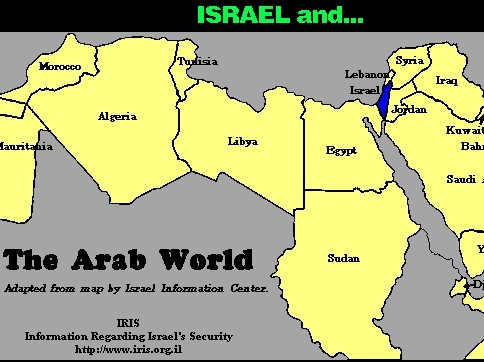 Israel is shown in blue. Mauritania, Sudan and Somalia are somewhat cut off at the edge of the map (Image via Information Regarding Israel’s Security).

From the time of its establishment in 1948, Israel faced the constant threat of annihilation. For its first 19 years, Israel was only a strip of coast about 11 miles in width. In 1967, Israel’s neighboring Arab countries launched yet another war to destroy it. Israel defended itself and took control over the Gaza Strip, Golan Heights and Judea and Samaria (also commonly referred to as the West Bank).

It’s important to emphasize that Judea and Samaria are a mountain ridge overlooking Tel Aviv about 11 miles to the west and it’s the ancient heartland of the Jewish people since the time of the Bible. Both the Gaza Strip and Judea and Samaria were intended to be part of the Jewish state in the legally-binding San Remo Resolution of 1920, agreed upon by all the winning powers in the aftermath of WWI. 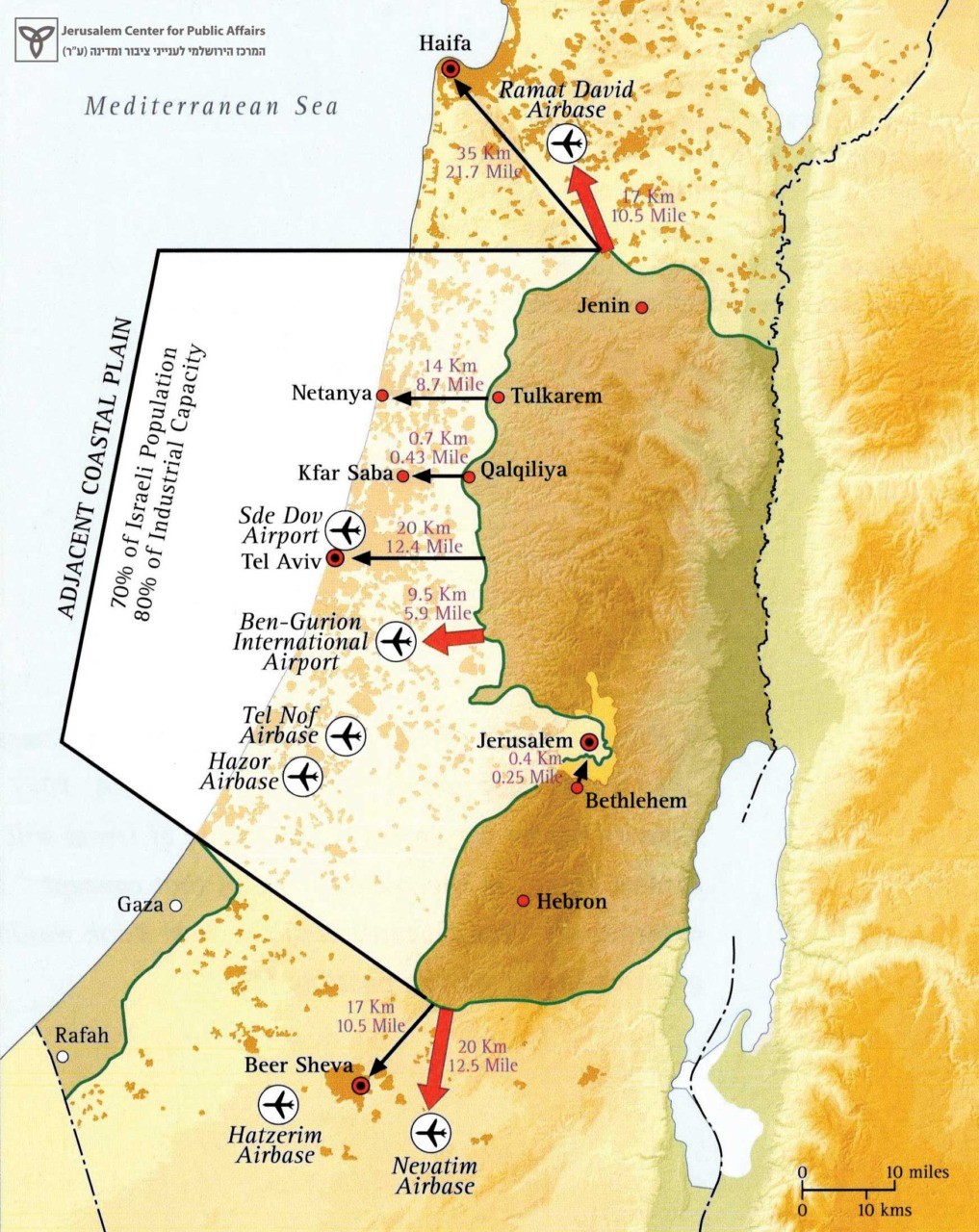 When the modern State of Israel was created in 1948, all neighboring Arab countries invaded it and Jordan took control of Judea and Samaria while Egypt took Gaza.  Since the liberation of these two territories in 1967, Jews returned and settled on the sites of ancient Hebrew towns in the area.

Until 14 years ago, there were about ten thousand Israelis living in prosperous and beautiful towns inside the Gaza Strip. For decades the left in Israel, Europe and America demanded that Israel apply the formula of “Land for Peace” and give away its crucial strategic and historical lands to the local Arabs who took on the name of “Palestinians.”

In 2005, the Israeli government decided to do just that. It announced a plan to expel every single Jew living in the Gaza Strip and pull out the Israeli army. The Israeli left – with the media as their sounding board – infamously promised that Gaza would become “the Singapore of the Middle East” and that on the land of the former Israeli communities will be established peace camps. After all, if we withdraw to the very last inch of Palestinian demands and give them their own state in the whole of the Gaza Strip, why would they continue waging terror against us?

The right in Israel warned that the evacuated Gaza Strip will become a launching pad for missiles into Israel and that Gaza will be taken over by Hamas. The left mocked this assumption and reassured the Israeli public that once Israel will be out of the Gaza Strip there will be peace.

In August 2005, Israel expelled the Jews of Gaza and even removed every single body from the Jewish cemetery there.  The Palestinian Authority received the whole of the Gaza Strip without a single Jewish civilian or soldier inside.

Less than two years later, Hamas took control of the Strip and ever since Israel finds itself facing waves of terror and missiles from the territory that was supposed to become peaceful.  The Gaza Strip is tiny, flat and about 50 miles away from Tel Aviv and Jerusalem. Judea and Samaria is much bigger and runs alongside central Israel, directly adjacent to the heart of Jerusalem and a stone’s throw from Tel Aviv.

There are more than half a million Jews living in Judea and Samaria, unlike the ten thousand evicted from the Gaza Strip. Much of the international community and the left in Israel, Europe and America demand that Israel do in Judea and Samaria what it did in Gaza in 2005.

Such a move will lead to the destruction of Israel. The “Land for Peace” formula leads in reality to “Land for War”.

Yair Netanyahu is a conservative political activist and son of the Israeli prime minister.