German Chancellor Angela Merkel urged all Europeans on Saturday to join together and renew the fight against racism and antisemitism as she honored the anti-Nazi resistance in her own country.

Speaking at a solemn ceremony marking the anniversary of the failed attempt to kill Nazi dictator Adolf Hitler, Merkel said the courage and sacrifice of the conspirators remain as an example of why the fight against anti-Jewish sentiment remains important.

“They put humanity over their own human lives,” she told the crowd at the site where plot leader Col. Claus von Stauffenberg and others were executed.

Von Stauffenberg tried to kill Hitler with a briefcase bomb on July 20, 1944, during a meeting at his headquarters in what was then East Prussia. Hitler escaped the full force of the blast when someone moved the briefcase next to a table leg, deflecting much of the explosive force. 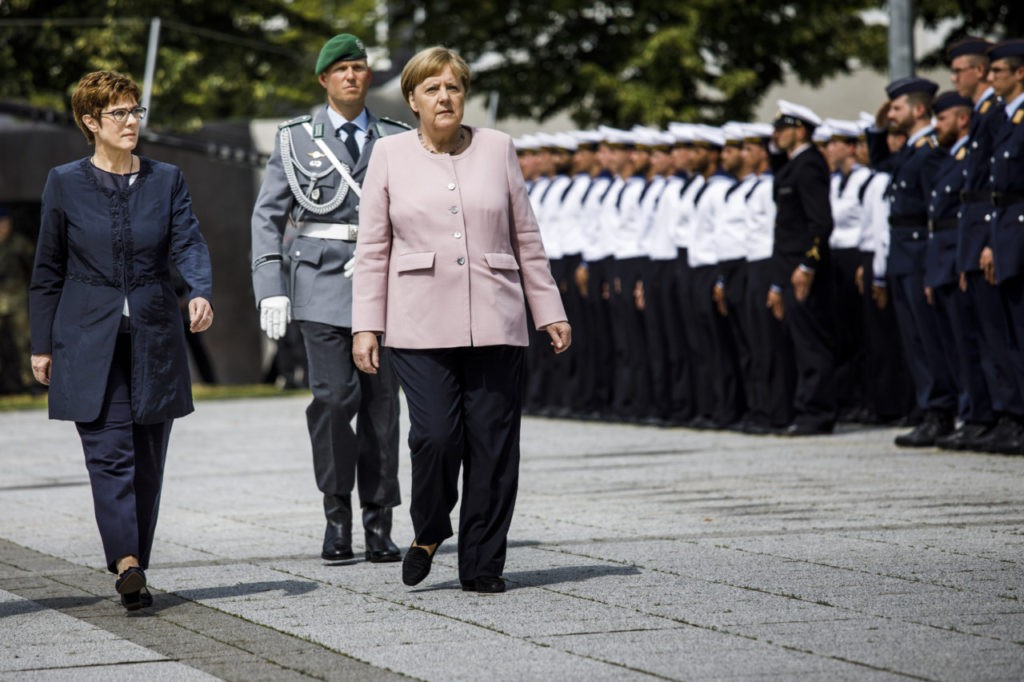 German Chancellor Angela Merkel (R), and German Defence Minister Annegret Kramp-Karrenbauer (L), pass recruits during an oath-taking ceremony of the German army in Berlin, Germany. The pledge takes place in memory of the resistance against the National Socialist dictatorship on the occasion of the 75th anniversary of the failed attack on Adolf Hitler on July 20, 1944. (Carsten Koall/Getty Images)

The plot crumbled when news spread that Hitler had survived. Von Stauffenberg and his fellow plotters were executed within hours.

Merkel applauded all who stood up against the Nazis in different ways, including people who hid Jews to save them from the death camps, the Jews who rose up in the Warsaw Ghetto to attack their Nazi captors in 1943, the Polish fighters of the 1944 Warsaw Uprising and other partisans who fought against the German occupiers and others.

Amid evidence of rising antisemitism and racism in Germany, Merkel said people need to draw inspiration from the civil courage shown by those who resisted the Nazis and make their voices heard.

“Instead of looking away or being silent, we need to be engaged,” she said.

About 200,000 Jews live in Germany, Europe’s third largest community after Britain and France, up from only about 15,000 after the end of the Nazi Third Reich.

Many German Jews have reported being threatened in public places for their faith, with physical attacks not uncommon.

In one prominent case last year, a 19-year-old Syrian man was convicted for assault after lashing out with his belt at an Israeli man wearing a Jewish kippa skullcap while shouting “yahudi”, Jew in Arabic.

Angela Merkel’s pledge came just six weeks after her government warned Jews not to wear their traditional kippah in public places due to rising antisemitism.

Felix Klein, the country’s commissioner on antisemitism sparked uproar when he said Germany was becoming too dangerous for Jews to wear their traditional skullcap in public places.

“I cannot advise Jews to wear the Kippah everywhere all the time in Germany,” Felix Klein said in an interview published by the Funke regional press group.

Klein, whose post was created last year, cited “the lifting of inhibitions and the uncouthness which is on the rise in society” as factors behind a rising incidence of antisemitism.

Merkel has also deplored what she called “another form of antisemitism” stemming from a major asylum-seeker influx, with the majority coming from Muslim countries like Syria, Afghanistan or Iraq.