(JNS) — An event at the United Nations headquarters in New York City on Wednesday highlighted six Israeli innovative solutions to critical problems around the world.

Hosted by the Israeli Mission to the United Nations, it allowed members of Israeli business community to connect with governments and senior officials from the international community at U.N. headquarters during a week that was part of the world body’s Sustainable Development Goals (SDGs), with the hopes that these companies and technologies presented can help countries achieve their respective SDG aims. The evening was moderated by Israeli actress and producer Noa Tishby, and took place as part of the United Nations Development Week.

Mino Negrin, founder and CEO of NUFiltration, introduced a creative technology for artificial kidney remission used to filter and purify water. Eyal Yassky, co-founder of Hilico, spoke about his company creating the world’s first portable and affordable rain-harvesting device, designed to work off the grid, that can turn rainwater into clean, drinking water in rural and disaster relief areas.

“Over a billion people live off-grid and many of them rely on rainwater,” he said. “This is our focus and duty as entrepreneurs and as global citizens to help those people. Harnessing technology and innovation, and achieving the SPGs, is not just about developing technology. It’s about making sure that we adapt our technology to the people who really need it.”

Shuli Kurzon van Gelder from MASHAV, Israel’s agency for international development, discussed its extensive fieldwork to help the development of countries around the globe and its projects with Israel’s neighbors, Egypt and Jordan, as well as with the Palestinian Authority.

“I think these programs are the seeds of the peace-building process because we’re talking about people,” she said. “When you invest in people, it gives stability to a relationship. We hope that will be a basic foundation for the peace process.”

The CEO of SupPlant talked about creating the world’s first commercial system for autonomous irrigation by developing an artificial-intelligence system that analyses data collected by sensors in the field and then translates them into irrigation commands.

Other companies and organizations that participated in the event included the Rashi Foundation, Social Finance Israel and SmartWater Group.

Guests at the event included diplomats and governmental representatives from various countries, U.N. officials, and representatives of Jewish and pro-Israel organizations. Melissa Francis, co-anchor of Fox News Channel’s “Outnumbered” and co-anchor on FOX Business Network’s “After the Bell,” was also in attendance with her son. 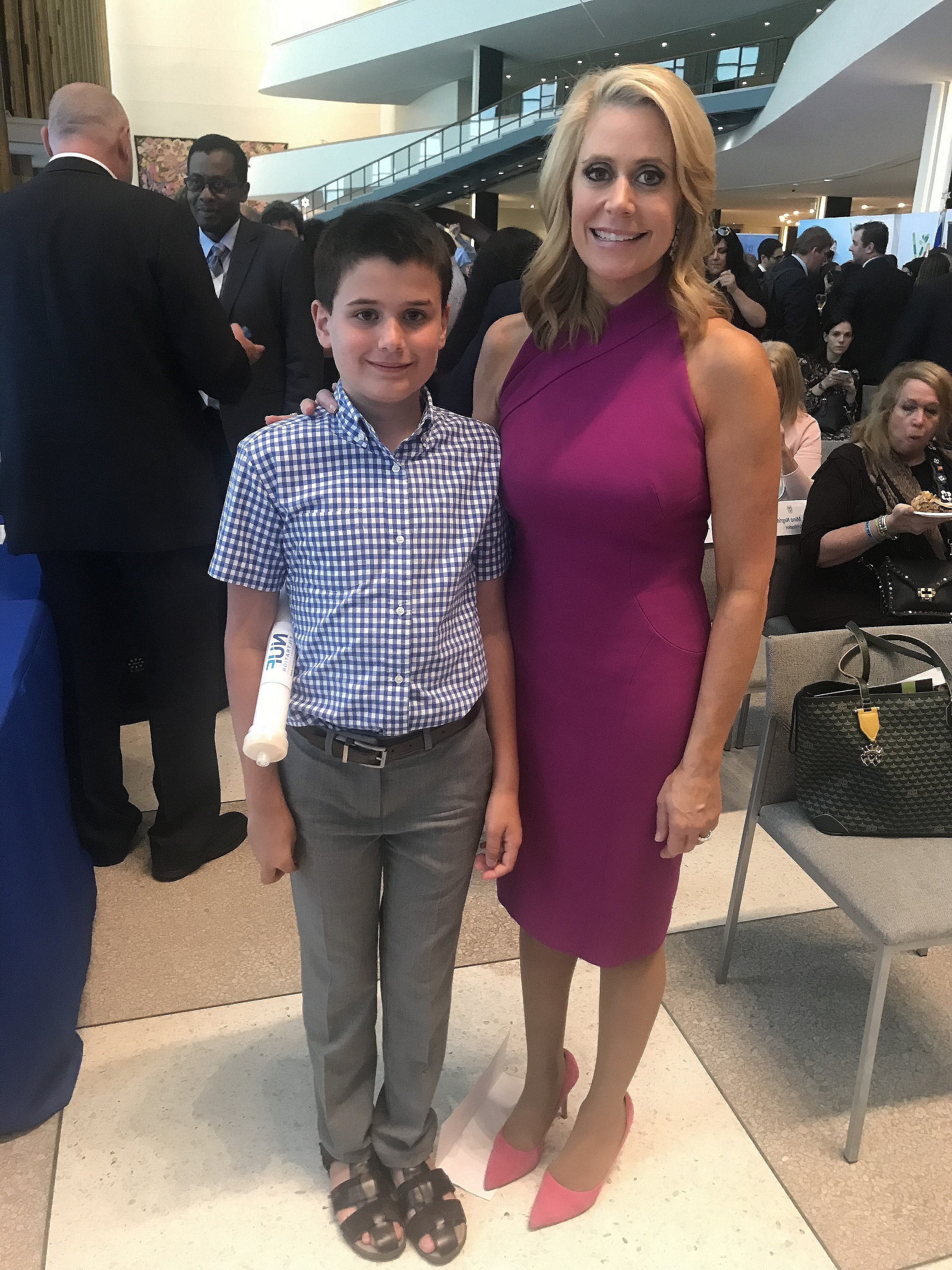 Melissa Francis and her son, Thompson, at U.N. headquarters in New York City at an event celebrating Israeli innovation. Photo by Shiryn Ghermezian.

“I’ve been a business journalist for a long time and from a business, finance and Wall Street perspective, we always think of Israel as being a home of real innovation,” she said. “Any time I hear about a company going public at one of our stock exchanges or somebody on a road show with an Israeli company, all of the sudden it perks my interest because I know there’s going to be something really unique and exciting about the company.”

Francis told JNS she had been looking forward to attend the event “because of the innovation that I’ve seen come out of Israel and come to America.”

She added, “I know the companies that have gone public and have changed lives, and so I know that, but maybe the rest of the world doesn’t, and I thought it was interesting to come here and see all of it and help get the word out about all the innovation. Everyone knows about Israeli pharmaceutical companies and the great research that goes on, but there’s so much more than that and to see here—them putting that brainpower to work to make the rest of the world a better place shows the spirit of Israel to me.”

Elkin spoke at the later event, saying, “The great philosopher Plato said thousands of years ago that necessity is the mother of invention; this is exactly the story of the State of Israel. Necessity led us to many, many inventions in Israel, and the key to these inventions and the solution to these challenges that we spoke about today at the U.N. is innovation. Israel studied and can now teach others [how] to transform our problems and challenges to the source of our strengths, and the way to do it is through innovation.”