Rep. Alexandria Ocasio-Cortez retweeted fake news about Israel’s ongoing demolition of several illegal Palestinian-owned buildings in eastern Jerusalem, claiming Israel was attacking Palestinians “just because of who [they] are.” 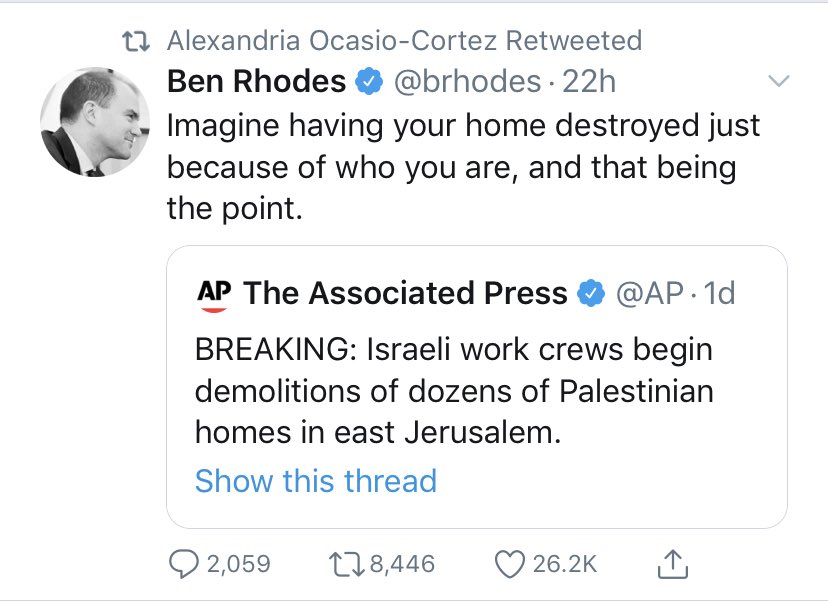 The original tweet was written by Ben Rhodes, a national security aide to President Barack Obama. Rhodes had little prior foreign policy experience when he rose to prominence in the Obama administration, though his brother was the head of CBS News. He is widely regarded as the architect of Obama’s policy of distancing the U.S. from Israel, and played a key role in negotiating the failed Iran nuclear deal and the failed normalization of relations with Cuba. He was also a key figure in covering up the story of the Benghazi terror attack, when the Obama administration claimed falsely that the deadly assault on the U.S. consulate was a spontaneous reaction to an anti-Islamic YouTube video.

As the New York Times noted, in an article largely sympathetic to the Palestinians, the ten buildings were demolished because they were too close to the security barrier that Israel has constructed to prevent suicide bombings and sniper attacks in the city. Most of them were still under construction and they were mostly uninhabited. The demolitions had also been approved by Israel’s left-leaning Supreme Court. A grand total of seventeen Palestinians were relocated.

There is no evidence whatsoever that these seventeen Palestinians were targeted “just because of who [they] are.” Rather, the buildings are being demolished because they were being built in violation of Israeli law and could have posed security risk to the city as a whole — a city that includes both Israelis (Jewish and Arab) and Palestinians.

Ocasio-Cortez has spread false information to attack Israel before. Last year, she claimed that Israel had committed a “massacre” of Palestinian protesters at the Gaza border fence. The “protest” was organized by the Hamas terror group  in an effort to infiltrate Israel, and the vast majority — 50 of 62 — of those killed were members of Hamas. Moreover, Hamas staged the operation as a “protest” to create precisely the propaganda message that Ocasio-Cortez shared.